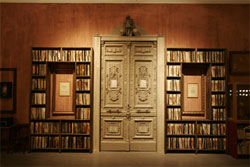 I guess Robert Kusmirowski just wasn’t made for these times. Although his work – comprising sculpture, drawing, architecture and performance in roughly equal measure – keeps pace with contemporary art, it comes with a knowingly antiquated sense of work ethic (in 2003 he rode from Paris to Leipzig on a 19th-century bicycle, dressed in period garb) and craftsmanship (from an early age he painstakingly forged bus passes and postage stamps for his entire family). In his installations he showcases his uncanny ability to craft replicas for illusionistic effects of decay and ageing, though he does it more in the spirit of the 19th-century artist than a Hollywood special-effects technician. But in contrast to artists such as Gregor Schneider or Mike Nelson, Kusmirowski doesn’t go to great lengths to disguise his tableaux’ institutional setting; the edges of his interventions are clearly visible. Attempting, as he puts it, to ‘build an aura from scratch’, he insinuates his own constructions into existing ones, using accumulations of found objects and faux replicas, creating an amalgamated, indeterminate patchwork of history and its simulation, not unlike the post-Communist landscape of his native Poland. The result is less about the relationship between traditional craftsmanship and artificial simulation than the disjunction between the installation and its context.

With his latest large-scale instalment, Ornamente der Anatomie (The Ornaments of Anatomy, 2006), in Hamburg, Kusmirowski attempted to evoke the presence of Dr Vernier, the mad scientist and author of the eponymous book. At the exhibition’s entrance I encountered an old door mounted in a fake white wall, introducing the recurring theme of secret worlds hidden behind closed doors (though I didn’t get to open any doors myself here). The corridor opened into a vast library lined with shelves crammed with books scavenged from used bookshops or public libraries. I thought for a moment that this could be the Kunstverein’s new library: but the obvious disjuncture between the proportions of Kusmirowski’s constructed shelves and the height of the building itself made the shelves look as though they were struggling to fill the space. The books included pulp paperbacks, old copies of Rolling Stone and obscure technical volumes, including one called AIDS 1999. I was drawn to a three-ringed binder temptingly labelled ‘Information’, though I didn’t dare remove it. Among the shelves were spot-lit nooks with small, vaguely cultish art works. In its archiving of the arcane the place resembled Los Angeles’ Museum of Jurassic Technology, but it lacked its thoroughness: rather than being able to dig deeper into the world Kusmirowski created, I was bound to bump up against the illusion. When I tried to open the card catalogue, I couldn’t pull out the drawers. Apparently the library was just for effect.

The atmosphere was more palpable in the next room, through a secret (already open) door in the library wall. This huge, locker-like space looked like a witch doctor’s den cluttered with medical miscellanea – though the perfect squareness of the space still suggested its role as a former white cube. The walls were covered in a pinkish fake marble, evoking a kind of soiled grandeur. Scientific arcana mingled with thrift store finds and cleverly faked relics, including a broken ceramic skeleton in a glass case, a musty velvet chair and an open drawer filled with disused doorknobs. But these items were all pushed to the sides of the room, as if to encourage looking rather than rummaging. A wooden desk was topped with a grotesque anatomical drawing of a baby opened down the middle, tiny animal skulls, unidentified specimens floating in jars and X-rays labelled with Polish names in red marker pen. In the far corner a large metal cage held an operating theatre, with a surgical table with two frighteningly realistic decaying bodes surrounded by electric drills and old prosthetics. The place harked back to a time when medical science wasn’t governed by ethics. It gave me the creeps.

Kusmirowski’s work rests heavily on our ability to detect the aura he is trying to summon. Unfortunately, the séance was interrupted every time I had to mentally sort the real objects from the forged ones, or each time I saw through the installation to the building’s architecture. Although Kusmirowski sets himself apart from artists making similar installations by allowing his scenarios to collide with the institutional framework, I found myself wishing that he had gone further; his work comes off as conceptually inconsistent. At the opening of the exhibition the artist stowed himself away behind a portrait of Dr Vernier, with only one eye exposed to spy on unsuspecting visitors. Similarly, walking through the show, rather then sensing the ghost of Dr Vernier, I was all too aware that the absent person here was Kusmirowski.