BY Verena Kuni, translated by Allison Plath-Moseley in Reviews | 01 JAN 01 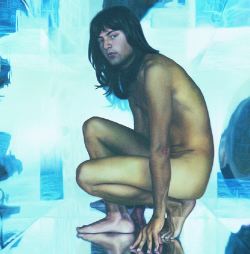 'I belong to Chrysanthemum hours... I must make my soul a decorative thing. My love of the ornamental is doubtless because I feel something identical in my life's substance'. Elke aus dem Moore, who curated 'Rocaille', introduced the show with this sentence loosely based on Fernando Pessoa's writings. Along with the Rococco ornamentation on the invitation card, you might have assumed the show to be yet another celebration of the decorative - something that appears to be happening everywhere these days.

The cult of glamour, so cheerfully co-opted by contemporary culture, mixes not only haute couture and disco balls with high art but also embraces the painting of a younger generation of artists whose work feeds off paisley, manga aesthetics, and Flash animation. The tendency to decorate appears to satisfy at least a desire for representation and beauty - Modernism meets Mannerism meets the Sublime.

All of which could be in seen in 'Rocaille: A Shellwork'. The show included naked young bodies (Antje Majewski); fashion (Dominic Eichler, Sylvie Arnaud); flowers (Ull Hohn); hanging gardens (Giorgio Ronna); sublime landscapes (Alexandra Vögtli); the ornament (Monique Sutter); painting about painting; and dandyish decadence (Lukas Duwenhögger). At first glance, the exhibition appeared to reflect upon many of the ideas generally associated with artistic beauty. Nevertheless, it was not simply a call for 'beauty now!'. Rather the curator aimed to find myriad approaches to pleasure in décor that could join in seizing the drunken ship 'Beauty' under the flag of Criticism.

However, work criticising such clichés (an idea sanctioned by Bohemia and Camp), can too easily become entwined with what is being criticised. 'Rocaille' succeeded in avoiding such pitfalls - an awareness of such problems was the starting point for the works included in the show.

This consciousness was evident in Dominic Eichler's weird photographs of himself wearing second-hand jumpers, Knitwear Photography (2000), which could have been lifted from a contemporary fashion layout. It also stares out of the perfidious, open gaze of the androgynous Adonis depicted in Antje Majewski's painting, Einladung zu einer Reise, Teil 2: Liebling (Invitation to a Journey Part 2: Darling, 2000), who kneels in the middle of a mirrored cabinet returning the gaze of the viewer. It also threads its way through the scenes of Lukas Duwenhögger's two-hour long, monumental video From Cotton via Velvet to Tragedy (1990). Like tableaux vivants, the artist slips into the role of a stylish, ageing fashion designer who has lost his youthful beauty, and talks to the audience as if they are an imaginary partner in conversation.

Despite their awareness of the venality, corruption, and artificiality endemic in culturally sanctioned concepts of beauty, these images are proof that, in the words of Dave Hickey, 'the language of beauty in our culture can continue to be an effective instrument for change'.

Hardly any other work allows us to understand this position as clearly as the group of paintings from the estate of Ull Hohn, made in the last two years of the artist's life. In the paintings Hohn, who died in 1995, re-staged the fictional course of a traditional artist's life. On the one hand, they are at once a lesson in Conceptualism, and the construction of mastery in painting, while on the other, exactly the kind of wonderful pictures you might expect to be produced according to the conventions of art history. The fragile ground of unconventional beauty which unfolds in 'Rocaille' proved itself, in more ways than one, to be capable of carrying the weight of art historical precedence.