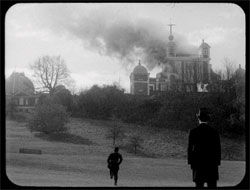 It may seem petty, but there is something irritating about the actor’s hands in the film at the centre of Rod Dickinson and Tom McCarthy’s Greenwich Degree Zero (2005–6). A gentleman dressed in Victorian frock coat and topper, his arms hanging limply at his side, looks on while a policeman, also in period garb, runs towards a burning Greenwich Observatory. Shouldn’t his hands be held with patriarchal composure behind his back or wrung woefully before him? Instead they betray an obvious awkwardness, which becomes emblematic of the whole show.

The obvious explanation is that this is not a professional actor. But a more profound reason can be found in the premise of the project itself. This film is a representation of an event that never happened and, whereas reconstructions by their nature require a certain amount of self-consciousness, a reiteration of a non-event is an ontological confusion at another level.

The historical source of Greenwich Degree Zero is an incident that was reported in the UK press in 1894: the French anarchist Martial Bourdin was allegedly killed by his own bomb in an attempt to blow up the observatory. The attack failed, Bourdin later died in hospital, and that was the extent of the incident. Dickinson and McCarthy, however, propose that the attack was successful and the observatory destroyed, adulterating a number of documents, including newspaper articles, political posters and illustrated pamphlets to reflect the hypothetical consequences. Sometimes an entire newspaper column might be reset; at others the removal or addition of a single word here or there brings the original report into line with this fictionalization. The manipulated documents are presented museum-style for examination – dimly lit and each with its own display unit – but it is immediately obvious that these are reproductions rather than genuine antiques. The artists think of them as existing in a timeless realm, like the magic flasks, coins or ammunition in video games, which hover in an abstract place that does not quite coincide with the space in which the action occurs. Similarly, these artefacts do not have the authority of evidence; they lack the aura of something that has touched history, experienced time. Their status, as evidence of something that never happened, is classically metafictional – compounded by their declaration of their own fakeness, drawing attention to their implausibility as if in protest against accepted logic. You could say that Greenwich Degree Zero – with its central motif of Greenwich Mean Time, which runs through the observatory – incorporates regimented time, the linchpin of logic, into its very plot.

Dickinson and McCarthy both take a selective approach to historical authenticity in their individual practices. Dickinson’s Psychological Warfare Re-enactment (2004), for instance, was not an exercise in exact reconstruction of the Waco massacre, for obvious reasons. A small crowd was driven to a sports stadium and subjected to a mere snippet of skull-crushing audio, compared to the 51 days of the original torture. If we think of Dickinson’s projects in comparison to those of Jane Pollard and Ian Forsyth – their frame-by-frame reconstruction of The Cramps’ 1973 gig at Napa Mental Institute, California (File under Sacred Music, 2003), for instance – then his approach to verisimilitude is positively expressionistic. McCarthy too, in his novel Remainder (2006), is more interested in the theoretical and psychological fall-out of reiteration than in anything so deterministic as reconstruction. What is more, Greenwich Degree Zero is not simply about the past, but a reflection on the present too. Bourdin’s case history has overt relevance to current discussions of sectarianism and terrorism.

However, the idea of retrospectively destroying the home of regimented time in the industrialized world, and all the implications of that, cannot be embodied by a static installation of unconvincing artefacts. Although there are some fascinating facsimiles – the police drawing submitted as evidence is particularly astonishing in its infantile crudeness – they neither attempt to dupe us nor examine the consequences, rendering them somewhat inert. Dickinson and McCarthy have mediated the media of the past to fabricate a post-anterior logic: ‘what will have been’. Yet image and object are not quite able to communicate the philosophical intricacies of this ‘what if’ scenario.