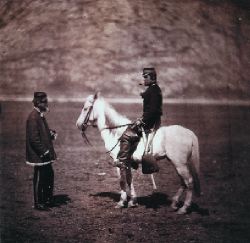 Roger Fenton's images from the Crimean War stand in odd contrast to the rigid formality of much 19th-century photography. A founding member of William Fox Talbot's Photographic Club, after making a trip to document Russia in 1851, and organising the first significant exhibition of photography in Britain in 1852, Fenton became the first official photographer appointed by The British Museum. Commissioned to travel to the Crimea in 1855 to document the two year conflict, Fenton returned with 360 glass negatives - the first known war photographs.

Concentrating on portraits of soldiers and officers, this show demonstrated that little has changed in the photographic chronicling of brutal international belligerence. Fenton was born 100 years too early to take advantage of the lightweight camera, and was lumbered with such cumbersome paraphernalia it needed to be transported in a small wagon, yet still his images seem to have set the precedent for much war photography since.

Fenton's images document the weary rather than the wounded. Most are taken in the downtime between skirmishes - unless you're as psychotically gung-ho as Tim Page or Robert Capa, when the shells are falling, trying to save your skin usually beats trying to get the Pulitzer. Images of infantrymen such as Captain Verscholye, Grenadier Guards (all works 1855) reveal the thousand yard stare of a Vietnam combatant, while the portraits of officers dining outside a field tent and sharing a bottle of wine, reveal the moneyed self-assurance that spawns military blunders such as the tragic charge of the Light Brigade.

Although it's unclear whether they saw each other's work, Fenton's photographs are reminiscent of Matthew Brady's contemporaneous images of the American Civil War, pictures that are now almost impossible to disassociate from the schmaltzy music of Discovery Channel documentaries. They also recall photographs taken in the Vietnam War. Take the men's battle dress, for example - uniforms are not always uniform, but customised by each soldier to protect against the vagaries of the weather, or show battalion allegiance. In only one of Fenton's images, Men of the 68th Regiment: In Normal Dress, are the uniforms identical. Soldiers gaze at the viewer with a sepia toned blankness not unlike the vacant, staring teenagers so ubiquitous in contemporary photography, although having spent months starved, frozen, and shell-shocked by the Russian siege, at least these men had something to look vacant about.

Formally, Fenton seemed to be intrigued by the possibilities that lay outside the established style of Victorian photography. Although most of his subjects are posed with the rigid formality of a 19th-century family portrait, he was not afraid - as far as the long exposures his technology would allow - to take shots of casual moments: a joke shared, a relaxing cup of tea, a smoke savoured. Sometimes his tableaux play with relationships that seem too deliberate to be mistakes. Elements on the horizon, for example, are carefully lined up with figures in the foreground; a distant soldier balances out what might have been an awkward composition. This feeling of experimentation is reinforced by Fenton's landscapes. Although not on display in this show, his images of battlefields are like proto-Richard Longs - empty and desolate valleys are pockmarked by shells that have rolled down hillsides to form deadly cannonball runs.

The extraordinary clarity of Fenton's photographs is a testament to the obsessiveness with which pioneer photographers explored the world of optics. His lenses achieved a depth of field rarely seen today. Razor sharp and as biting as the Crimean cold, his pictures have a similar impact to watching colour footage of World War II - they look so present and real, they're like a reality check for a collective memory inured by the comfortable distance black and white affords. The odd bleaching and haloes found in these salt prints express something of what must have been the unreal feeling of being thousands of miles from a home you may never see again.

Fenton wrote of the moment orders were received for the assault on the Redan: 'the sudden hush with which our previous mirth was quelled... that message, which, as they knew, was to some of them the summons to another world. I accompanied them till they reached the trenches.' And that's the best Fenton could do. No matter how much distance a sepia tone and 150 years can put between the 21st-century viewer and 19th-century infantryman, Fenton's haunting accompaniments still express what it might have been like, in the face of military incompetence and death, to have nothing but camaraderie and the thought of the next warm meal to keep your spirits up.