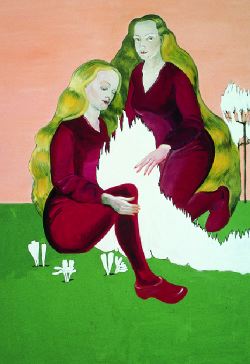 Rosa Loy is from Leipzig in the former East Germany, and her paintings satisfy many received prejudices about her place of origin. A potent mix of fairy story, Stasi authoritarianism, Prussian Puritanism and maidenhood - including the glorious maidenhood of the Communist, trench digging variety - are all present in her work. Depicting a compelling female dreamworld, Loy's powerful body of work includes a heavy dose of Freudianism in which suppressed visual equivalents of slips of the tongue hint at obscene meanings.

These paintings are large and rendered in casein, a rarely used water-based paint derived from milk protein. An ancient technique, and one of the most brittle of painting mediums, its use on canvas, as here, is usually thought unwise. Casein's heavy body creates robust paint masses, and Loy's brushwork application is not genteel, although it has an intense quality.

The artist's principle device is the coupling of two female dopplegängers, whose relationship is ambiguous, but which seems auto-erotic or incestuous. These young, identically dressed siblings are always in intimate proximity to each other, and wield tools that are representative of systemised order and object relationships. Defined by their engagement in a shared, usually generative task, the cloned females make conspicuous an absently symbolised masculinity. Works such as Schnecken Kommen (The Snails are Coming, 2000), Züchtung (Fertilisation, 1998), or Initiation (2000) depict industrious females respectively hoeing a garden threatened by huge snails, peering into microscopes at cellular, chromosome-like forms, or controlling a fairy story fire between their legs.

Self-identity becomes confused in the mirroring that takes place between the twinned characters. A textbook psychoanalytical reading of these relationships would include the manifestation of a family dynamic, and its themes of separation and loss. Narcissism, engulfment and intimacy also present themselves in the work, as well as representations of sexuality - especially everybody's favourite, the phallic symbol.

Ernte (Harvest, 2000) continues Loy's cultivation theme, summoning a Surrealist mood - ubiquitous vanishing point and all - rendered in melancholic northern colours. Versuch (Attempt, 2000), with its ambiguous representations of masculine death, appears to depict some kind of sickened, failed harvest. Wilde Wickeln (Savage Entwining, 1999) is a slightly different category of painting, a flower study of a hugely enlarged bloom in which germinal sexuality is represented like a cross between the pictures of Georgia O'Keefe and Edward Burra. Unterhaltung (Conversation, 1999) is a less successful work, in which a relaxed couple in a beauty parlour prove themselves perhaps too undeservedly contented for Loy's sensibility. Death; the macabre; fetishised hair tresses; sickly utilitarian colours; horticultural labour and the soil of the earth are the references which construct the artist's world-view.

There's a retrospective mood to Loy's work, which partly stems from the rare purpose of her technique, unencumbered by irony, bad taste, or self-consciousness at being a painter. Were her paintings to come from Los Angeles, New York or London, their implication would be very different. As it is, her art practice seems an occasion for gratitude, suggesting that it is, perhaps, we who are the exiles.