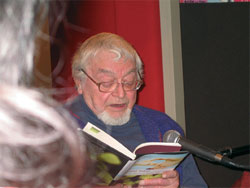 As night fell on London after a day of fiercely unpredictable weather, a wooden-headed psychopath committed multiple murders with a blunt instrument and taunted those gathered around him with crude innuendo. Then he sang ‘Happy Birthday’ in his high-pitched shriek of a voice and everyone applauded warmly. Passers-by could be forgiven their uniformly bemused expressions; it’s not every evening you see a group of adults transfixed by a traditional Punch and Judy show in a closed bookshop on London’s Fulham Road. And if they had been told that the event was organized to celebrate the author Russell Hoban’s 80th birthday and the publication of his latest book, few would have been much the wiser.
The Punch and Judy show (or rather a variation on it) forms an integral part of Hoban’s best-known novel, Riddley Walker (1980). The book is set in a future second Stone Age, thousands of years after a nuclear war, and its apocalyptic vision is made all the more terrible and believable by the inclusion of small details recognizable from our own time. Written entirely in a bastardized pidgin English, the book draws the reader in so completely that it should come with a warning about its potential affect on one’s own grammar. Thus ‘Riddley-speak’ was given the nod in the mis-spelt title for this weekend of Hoban-related events; ‘Some-Poasyum’.
Strangers sipped at glasses of warm wine and exchanged smiles like people at a family gathering. Hoban is a writer with a cult following, and members of his official fan club, The Kraken (who take their name from the enigmatic presence in his book The Medusa Frequency), made up the majority of those present. The smiling novelist sat on a futuristic banquette, his walking-stick beside him. Wearing a natty purple knitted jerkin, stacked orthopaedic boots, his trademark large glasses and white goatee, he looked like an affable sage about to dispense words of wisdom to a huddle of devotees. He read the first chapter of his new book, Come Dance With Me, in his singsong American-inflected voice, and a story emerged that followed the pattern of most of his books: a man and a woman from very different backgrounds (in this case a 54-year-old rock chick in a band called Mobile Mortuary and a hospital diabetes consultant) meet by chance and an unlikely relationship develops. Hoban draws constantly on specific London locations, which anchor the virtually plotless celebration of life’s randomness and the power of the imagination that dominates his writing. London, he admitted, was a central character in many of his books, as vivid and eccentric as the individuals portrayed.
Hoban answered questions and spoke humorously about his background (his parents were Russian Jewish immigrants), his health (‘I’ve put in more hospital time than most have had hot dinners’) and other influences on his work. His curiosity about human relationships has sustained him into a prolific late period: nine novels in the last decade alone and a tenth well under way. The talk ended, and the serious business of getting first editions signed and dedicated began. The Kraken contingent, some of whom had travelled from around the world to be present, discussed the next day’s outing: a coach trip to Canterbury Cathedral to see the 15th-century painting of St Eustace – Riddley Walker’s inspiration.