Despite what the press release says Ryan Trecartin’s show SITE VISIT at the KW – Institute for Contemporary Art in Berlin is not a solo show. The multimedia installation is made in conjunction with his long-time collaborator Lizzie Fitch and the revolving troupe of performers who populate the frenetic world of his – their – videos. The exhibition, co-curated by Klaus Biesenbach and Ellen Blumenstein, is likewise a conglomeration of sculpture, sound and video installation listed under a single, simple title that belies the multiple spatial and temporal realities that collide and coexist. At its core, the work of Trecartin/Fitch is an investigation into the multiplicity of being – a being perhaps incommensurable with the singularity implied by a solo show. 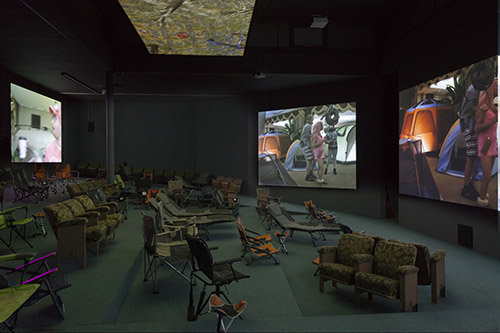 Entering SITE VISIT through one of two curtained entrances, the viewer is met by a chattering, pulsing soundtrack and a row of oversized leather recliners underlit with green LEDs – both characteristic tropes of Trecartin’s work. The chairs are rigged with ‘Butt-Kickers’, a brand of low-frequency audio transducers that transmit sound through the body of the listener. The floor and walls of the chair-filled corridor space – which Trecartin describes as ‘an aquarium for cats’ – are covered in green carpet and the cloying scents of the chair leather and fresh rug are a kick up the nose. 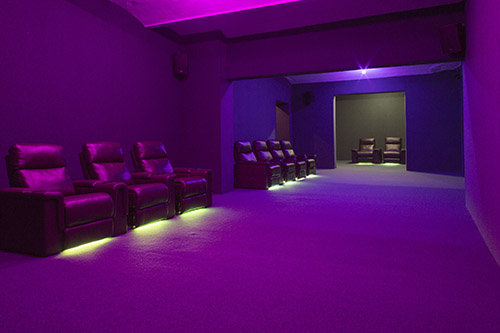 The chair-lined corridor flanks the inner sanctum of the exhibition which contains six large projection screens: three on the front wall, two on the back and one on the ceiling. SITE VISIT’s title foregrounds the fact that, unlike most of Trecartin’s studio-shot videos, this multi-channel installation was filmed on location, primarily in a former Masonic temple in Los Angeles. An audio track thumping through a 30-channel Dolby surround-sound system upholsters the exhibition space like so much carpet, spatializing the viewing experience. While the dialogue snippets in Trecartin/Fitch’s videos are often highly complex Dada-esque constructions, the dimensional and musical qualities of the soundtrack dominate the linguistic play. 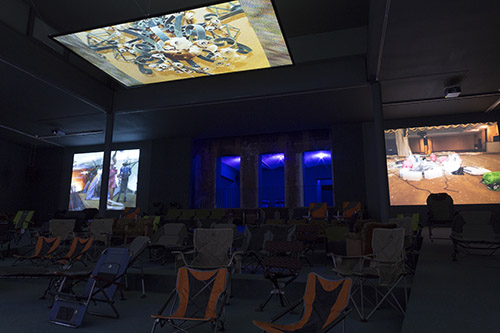 Recalling that prime example of ‘scripted reality’, the 1999 movie The Blair Witch Project, the premise of the video is derived from a haunted house story. A gaggle of wigged and dirtied age-, race- and gender-flexible explorers, whose faces and voices are refracted and skewed across all six screens, attempt to survive a night in the haunted temple. What exactly is haunting the place remains unclear. It might be the thing lurking in the scary toilet stalls, or a freaky bearded and blue-eyed witch drinking Coors Light, or two women who show up looking for ‘some college students to fuck’, or just the protagonists’ own weed-induced fantasies. These fantasies come to life in hallucinogenic digital animations of creatures and forests, made by Rhett La Rue, which flicker and crawl across the screens. 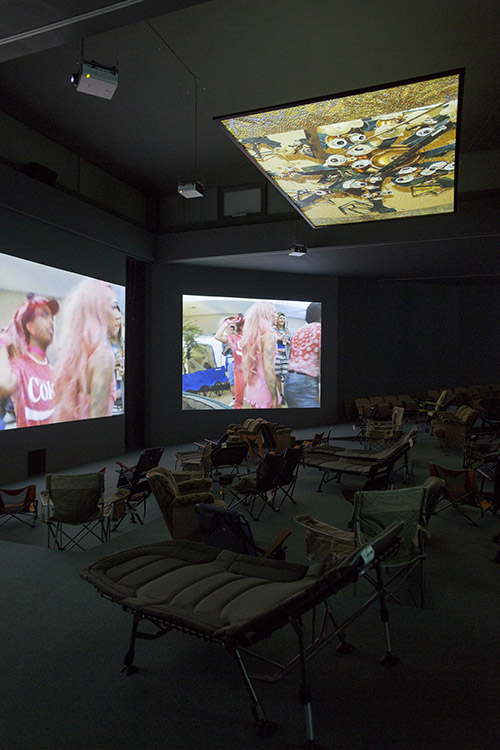 Much of the audiovisual material is captured by cameras strapped to airborne drones and extreme sports recording equipment attached to the actors lending a immersive feel that is mirrored in the screen arrangement. The viewing area is scattered with repurposed cinema seating banks and foldable camping furniture – not particularly strong sculptural work, but demonstrating that one is ‘on site’ and connected to the animated tent colony in the video. As with the video’s endless effects, it’s as if the film set has been simulated, entirely in post-production. The uncanny experience generated by this displacement is effective, yet due to the serialized nature of Trecartin/Fitch’s practice and the by-now pervasiveness of their aesthetic, the characters, visual tropes and camera manoeuvrings feel familiar.

SITE VISIT enacts what happens to consciousness and communication when we exist in many places and speeds at once. This sped-up contemporary condition is a symptom of virtual technology, but it’s also a facet of a basic human condition – time, space and identity have always been artificial co-constructions. At one moment in the video, the audio and video suddenly slow and sync; a character, played by Trecartin, asks in a dazed voice why everything has become so slow. The viewer hesitates too, unable to identify whether this is indeed slow motion after so much sped-up action, or if things have returned to real time. For Trecartin/Fitch there may not be much of a difference.