It was Good Friday and the day after the new Saatchi Gallery in the old County Hall building opened to the public. Thanks to our depleted ozone layer, it felt more like midsummer, as legions of local and foreign tourists amassed on the large lawn besides the London Eye.

Figuring out which queue to join was a challenge, since entrances to the Saatchi Gallery and to the building's other residents - the Aquarium, the Dáli Universe, the Oriental Buffet and Namco Station (turbo bumper cars) - are clustered together, all part of the assorted attractions at County Hall, formerly HQ of the maverick, left-wing Greater London Council, which Margaret Thatcher shut down in 1986.

Tim Noble and Sue Webster's bleeding heart tattoo, picked out in flashing fairground lights, greeted visitors in the marble vestibule. On the floor lay another familiar London sight: a hyperreal painted bronze sculpture of a figure huddled in a dirty sleeping bag, Gavin Turk's Nomad (2003). If this pairing suggested the glitzy melancholy of Shaftesbury Avenue at night, the illusion was fast dispelled by the queues for admission (adults £8.50) and for Saatchi souvenirs (postcards £1, T-shirts £12).

The first display, which combined a Damien Hirst retrospective with works by other artists in the collection, had something in common with these neighbouring spectacles. Hirst's works include a new-ish vitrine filled with live fish swimming around a dentist's chair, Love Lost (2002), and a Mini Cooper, covered in his trademark spots, installed half-way down a marble staircase in an obvious, jingoistic allusion to The Italian Job (1969). Past the thick-set bouncers in dark suits tearing ticket stubs, and along an oak-panelled corridor, is the first 'Young British Artists' signature piece, Simon Patterson's reworking of the London underground map, The Great Bear (1992). Like many paintings, photographs and prints in the collection, it sits in a heavy, gilt frame.

The corridor is one of several, the layout of which is hard to envisage, like the tangle of the Circumlocution Office in Charles Dickens' Little Dorrit (1855-7). Each one is lined with a number of small, well-appointed rooms, formerly the offices of civil servants. These act as 'brown cubes' for small solo shows by individual artists. Except for one room, an industrial-looking anomaly that may have sprung from Shoreditch, which features three rather predictable recent Saatchi finds. Peering through one door after another, I almost expected to see a 1980s bureaucrat sitting at his desk. This imparts a human presence to the works, as if they inhabit, rather than simply occupy, these spaces. Occasionally the corridors open up on to much larger ceremonial rooms, allowing for more theatrical presentations. These three elements - corridor, office, ceremonial space - each take up around the same share of the gallery's total 40,000 square feet.

Though the exhibition is more or less a reprise of 'Sensation' at the Royal Academy (whose solemn interior the County Hall echoes), the occupants of the office spaces suggest otherwise: Patrick Caulfield, Peter Davies, Peter Doig, John Bratby and Richard Wilson get a room each. The late, turgid Bratby was a surprise but his 'kitchen sink' epic The Greenhouse (1958) is a match for the Doigs next door. Wilson's celebrated installation 20:50 (1987) drew a snail-paced line of visitors stretching down the corridor, while the smell of its engine oil filled the air.

The exhibition occasionally strayed from its preoccupation with Britishness: Duane Hanson, Daniel Richter and Hiroshi Sugimoto make up an odd, arbitrary foreign contingent. The main presence in the sequence of offices was, however, Hirst: I counted 11 rooms devoted to him. Most were occupied by a single piece, which worked well enough when it came to the suitably uncanny and forlorn sheep and pig in formaldehyde, but the medicine cabinets, an unnecessary new series of prints of pill box labels, and the ever vapid spin and dot paintings couldn't, on their own, hold either the space or your attention. The oak panelling and the layout of the spaces - not to mention the collector's ego - precluded the set-dressing at which Hirst excels: at County Hall the architecture itself is the set and the art works the properties. Instead the work is dispersed, much more than it would be in a solo show in a museum. Saatchi's disregard for conventional display decorum has given rise to an innovative curatorial strategy: the solo show scattered within a group exhibition - or is it vice versa?

Hirst fares best with his show-stoppers in the grand rooms. The Physical Impossibility of Death in the Mind of Someone Living (1991), Love Lost, and the trite Hymn (1996) join other expensive and scandalous works by his contemporaries to form a yBa hall of fame in a vast Pantheon-like room. Hymn, whose overblown reds, blues and creams match the gaudy decor of the faux-classical ceiling, towers over well-known works by Mark Quinn, Tracey Emin, Ron Mueck Sarah Lucas, Chris Ofili and Marcus Harvey, which are all set in individual niches like minor deities. Saatchi, ever the impresario, knows what the crowds have come for and is delighted to oblige. Here his punters probably don't worry about whether or not something is art. The question now, as with the aquarium, the buffet, Dáli and the bumper cars, is simply whether it is entertaining. 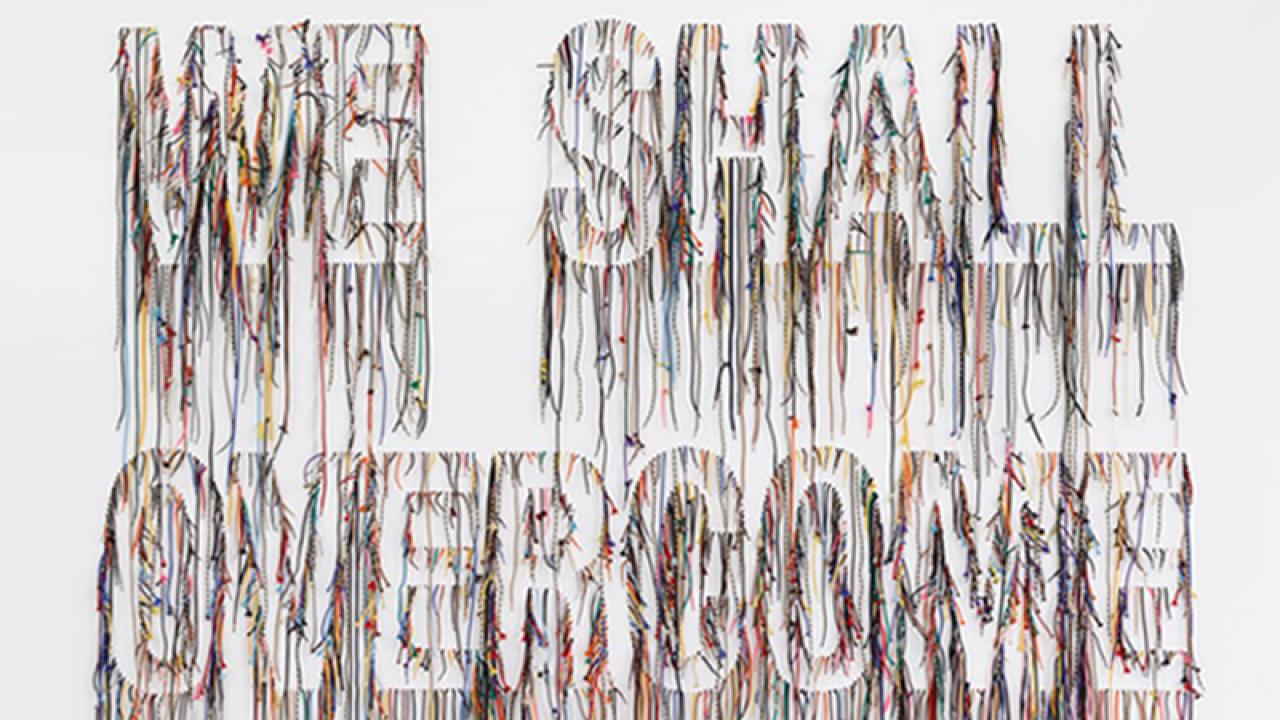