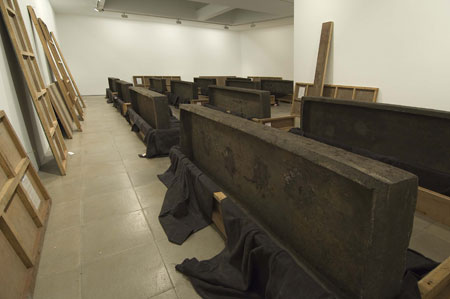 Santiago Sierra is famous for his reproduction of the forms of exploitation that underwrite the privileged lives of art audiences. This fact often leaves the latter with no moral high ground from which to pass judgement on the artist or his work. How can you get mad at Sierra for using the undocumented or indigent to hide inside crates on which you sit at an art opening, or to work as human canvases onto which he tattoos lines or sprays toxic foam, when you accept much more violent forms of exploitation every time you buy a cup of coffee, drive to work or put your shoes on? The outrageousness of this work grows from the banality of the crime at its core: the ideological submission of the consumer who implicitly accepts the inevitability of these forms of inequity.

Sierra’s labourers work as dark cousins to Vanessa Beecroft’s waxed and manicured women who stand in formation for VIP-list crowds. We are, however, generally more comfortable with the exploitative dynamics of Beecroft’s work. These women look like fashion models and are paid much more than those whom Sierra exploits – when he pays them at all. The differences between them also register in how the works are photographed: whereas Beecroft’s images are airbrushed, choreographed, colourful, glossy – shameless commodities – Sierra’s borrow from the shy photography of Minimalist sculpture – black and white, grainy, anti-spectacular. They are embarrassed objects, more serious in their tone than Sierra, who positions himself as something of a moral trickster. This is an unresolved tension in his work, for, as openly as Sierra exploits the labour of others, he hesitates to turn the processes that define his practice into fetish objects in and of themselves. One might say that that hesitation is the most compelling aspect of Sierra’s work, not because it suggests a way out of the dynamics he explores but because in that ambivalence Sierra betrays what Theodor Adorno described in Minima Moralia (1951) as ‘the shame of still having air to breathe, in hell’.

New works presented at the Lisson Gallery showed the artist experimenting on different fronts – with the literalism that marks his practice and with the local resonance of his actions. One of the Lisson’s two buildings was dedicated to 21 Anthropometric Modules Made from Human Faeces by the People of Sulabh International, India (2007). The three gallery rooms were occupied by large black rectangular slabs resting on their sides on top of the remnants of the wooden crates in which they were shipped. Packing material was strewn across the floor, and the air was scented with the sharp smell of fertilizer. As promised by the title, the slabs were made from shit that had been collected by workers at Sulabh (a sanitation initiative in India) and left to mature for three years before finally being mixed with a plastic resin to form a surface that looked like chocolate. If placed on the ground, the slabs – flat on one side and recessed on the other – would form trays with more than enough room for a body: because of this, the shape suggests furniture (bed, couch, bench) or the lid of a sarcophagus. This installation was pleasurable – walking through the show with others, one couldn’t help but feel a sense of relief at being given objects to contemplate, at not having to wrangle with the live presence of the exploited body. Ultimately, we would rather keep company with this nicely packaged shit than with the bodies from which it came.

The second suite of galleries centred on the documentation of site-specific interventions – including an audio recording of the public recitation of the names of disappeared and murdered Mexican activists (1549 State Crimes, Mexico City, 2007). Large black and white photographs documenting Four Black Vehicles with the Engines Running inside an Art Gallery (Caracas, 2007) juxtaposed images of the galleried automobiles and the mind-boggling sprawl of the Venezuelan capital. This is a version of a more controversial piece in which Sierra filled a gallery located in a former synagogue in Pulheim, Germany, with so much toxic gas from car emissions that you couldn’t enter without a mask (245 Cubic Metres, 2007). That installation was shut down early by protest – Sierra’s comment on the ‘banalization of the Holocaust’ risked putting the gallery in jeopardy but opened up interesting questions about whether, and how, an artist might go about this kind of intervention in good faith. Also on view were two other projects realized in Caracas in 2006: photographs of Venezuelans’ backs, tracking Sierra’s Economical Study on the Skin of Caracans (which averaged the grey scale of the skin colour of 35 people and mathematically generated an economic value for white, black and grey) and a projection of Concert for a Diesel Electric Plant (in which Sierra hooked a generator to amplifiers and let it ‘play’ in the Chacao Foundation’s Experimental Room).

The Lisson’s basement housed a slide show documenting Sierra’s Land art project Sumisión (Antes Palabra de Fuego) (Submission, Formerly Word of Fire, 2007) and its setting, Anapra – an area a few metres from the US–Mexico border, on the west side of the infamous Ciudad Juárez. Here Sierra carved the Spanish word for ‘submission’ into the ground in four-and-a-half metre trenches, which were then filled with concrete. The words were to be set on fire in May 2007, but this last step was interrupted by local authorities, who censored the action. Ciudad Juárez is a site of profound toxic pollution, infamous for its sweatshops and for the serial murders of women working in them. The bodies of some of these women were found in the hills near Sierra’s site, and those hills, now known as Black Christ Mountain, have become a site of grim pilgrimage. Sumisión is itself part of Proyecto JUAREZ, organized by Mariana David. David enlisted 17 male artists (including Joshua Okon and Miguel Calderón) to explore the dynamics of the various systems (nationalism, capitalism, patriarchy) that bear down on this border town. This is perhaps Sierra’s most open-ended and challenging work. Sumisión is fully over-determined. As the wall text rightfully reminds us, from the position of the radically disenfranchised, the word is unthinkable, even as it appears to describe their condition. Submission is suicidal. Submission is murderous. Unlike the words of Ed Ruscha’s paintings, which hang in empty landscapes, the ground here is filled with corpses, and among them Sierra’s letters become fighting words in spite of themselves.