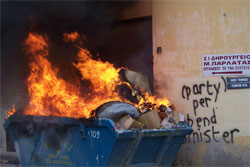 The curators of Manifesta 6 wanted to set up an art school in Nicosia, Cyprus. Intended to involve some 90 participants from multiple disciplines and to run for three months, this unconventional recasting of the roving art biennial was due to open on 23 September; at the time of writing it seems highly unlikely to do so. There is bad blood, to put it mildly, between the organizers. On 1 June Nicosia for Art (the body appointed by the city to co-ordinate the event, alongside the Amsterdam-based International Foundation Manifesta) fired the trio of international curators it had hired, instigated lawsuits against them and IFM for damages, and summarily nixed the biennial. IFM instructed its own lawyers, and by 5 July the participants were in court. But even if school’s out, class is still in session. Particularly for footloose curators, but more broadly for anyone interested in gauging the limits of contemporary art’s purview, the débâcle offers a range of lessons, wrapped in a cautionary tale.

What actually happened in Nicosia depends on who you ask, because Manifesta 6 is in some respects a classic Rashomon situation. The known facts are these. The curators, Mai Abu ElDahab, Anton Vidokle and Florian Waldvogel, modelled their school (rigorously and thoughtfully, as their recent publication Notes for an Art School demonstrates) on pedagogical experiments such as Black Mountain College and the Bauhaus. They made it tripartite, encompassing what Vidokle calls ‘a whole range of possible models for educational institutions’. ElDahab’s component was a ‘nomadic structure’; Waldvogel’s was largely to exist on-line. The problem, when it arose, lay in Vidokle’s segment. This was to be located in an old hotel on the north side of the UN-patrolled Green Line that since 1964 has divided Cyprus into an increasingly Turkish-Cypriot north and a Greek-Cypriot south, and which bisects Nicosia itself.

While Cyprus joined the EU in 2004, the Turkish Republic of Cyprus is not recognized by international law. The Manifesta Foundation worked only with Greek-Cypriot authorities in Nicosia – who set up NFA, hired the curators and, according to the foundation, contracted themselves to acquire sites for the art school on each side of the Green Line. NFA denies the last point, and therein lies the ruckus. At the end of March Yiannis Toumazis, NFA’s general co-ordinator, announced that a school in the north was unworkable and illegal and the curators found the locks on their offices changed.

Ask Waldvogel about this and he is foxed. ‘NFA’s actions are inexplicable’, he says. ‘The impression we were given in the first 15 months of our collaboration with them was that they are engaged and open to a dialogue with the other side and that the politics of the “Cyprus Problem” would remain outside our school.’ ElDahab, by contrast, says that she chose to site her project only in the south precisely because the Nicosia Municipality’s role as financial backer meant that IFM ‘would always be subject to its political will. For myself this parameter was always clear.’

Unsurprisingly, Vidokle sees it differently again. NFA, he conjectures, was essentially ignored by the upper levels of Cyprus’s government until Manifesta held a well-publicized press conference in January. ‘At this time we were extremely pleased with the outcome, as it felt like the project actually gained momentum. In retrospect all this is very ironic, because shortly thereafter all facilitation and co-operation with local authorities slowed down and eventually stopped.’ The kindest extension of this reading is that Nicosia’s officials were so pleased to be hosting an international art event that they were temporarily blinded to Realpolitik. ‘What tangibly changed some time after Cyprus entered the EU’, Vidokle continues, ‘was the unspoken policy of the government of the Republic of Cyprus to put more pressure on the Turkish Cypriots by further isolating them socially, culturally, economically, etc. Manifesta 6 was in direct conflict with this policy.’ One upshot is that there is potentially political capital here. Does Vidokle feel that the affair may wind up reinforcing nationalist feeling in Nicosia? ‘I feel that some people may misuse this situation precisely in the way you suggest, intentionally or not’, he says. ‘That would be extremely unfortunate.’

On the other hand, ElDahab believes that media coverage, while mostly biased towards the municipality, has been so limited that it’s likely to have little impact on local politics. For her a bigger issue is that discussion of the affair within the art world has reduced itself to a cartoonish case of idealist art people versus evil politicians. A more useful focus, she believes – and a way of addressing issues of globetrotting cultural production in general – might be the flaws in the current administrative structure of the Manifesta Foundation, which she feels needs to create ‘a more substantial and less superficial relationship with the political contexts in which it might take place’. The extent to which IFM and certain of the curators were apparently soothed by the officials’ blandishments into believing an art venture could override Cyprus’ deep and longstanding fractures is surprising. ‘In retrospect’, says Waldvogel, ‘it seems to me that IFM, NFA and we, the curators, were naive to think that a project of this calibre can be realized within this political atmosphere.’

Particularly since NFA appears to have done little to make the project workable. They never confirmed its total budget, failed to secure venues, couldn’t organize visas for participants, didn’t send out invitations and finally slashed the artistic budget in half. By March the curators were in touch only with one representative of NFA, the aforementioned Toumazis, who, says Vidokle, ‘secluded himself at the offices of the municipal government, and all further communication became a series of legalistic emails’. With NFA denying ever having agreed to the venue in north Nicosia, the court case may well hinge on what was actually written down. Either way, it is bad news for the Manifesta Foundation, which, Vidokle notes, ‘has a small staff, no legal defence fund and no experience in defending itself against an opponent with the resources of a country’. ElDahab in particular regrets this greenness, wishing that IMF had sought a compromise solution rather than ‘escalating the situation by getting entangled in legal rhetoric […] which is neither its mandate nor its role’.

Manifesta has wandered into tough territory before. The fifth edition, two years previously, was held in Spain’s fractious Basque region. There the curators found that, rather than just selecting artists and theorizing an exhibition, they were forced to strategize well in advance, consort closely with city officials and politicians, and bring on board mediating agents to secure venues. It’s only now becoming clear how expanded are the curatorial responsibilities in such situations. If equivalents are to go ahead in future and not be utterly compromised along the way, they may necessitate the development of an entire bureaucratic curatorial underclass, versed equally in the writings of Nicolas Bourriaud and Sun Tzu.

But Manifesta 6 may prove more of a turning-point than this. Its furious complications raise obvious questions regarding the role contemporary art has to play in contested regions. Do the liberal pieties that undergird it have any place in such zones? What new shapes may art and artistic events have to assume in order to be more than a transiently applied, easily removed, sticking plaster? And, particularly in the light of Manifesta 6, are formal metamorphoses sufficient? ‘Maybe this failure will teach all of us a lesson,’ says Waldvogel, ‘that we need to rethink the idea of globalizing a Western approach to art.’ To rehearse our blinkered sanguinity once more, then: if Manifesta 6 couldn’t be a success, let’s hope it achieves something in noisy malfunction.

All quotes from the curators are from email correspondence with the author.