Ukrainian artist Boris Mikhailov has been documenting the inhabitants of his homeland for over 30 years. American artist Collier Schorr responds to his confrontational photographs by designing this layout and annotating his images 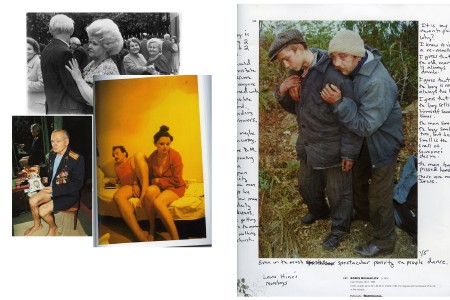 A sense of dread, upon opening the book. Photographers are often asked to defend the use of their medium as dispatch. Every culture shows its poor. Countries such as Bangladesh are so foreign to the West and so infamously poor that their poverty has ceased to be alarming. But the poor of Russia, the white poor, or the Ukrainians in Boris Mikhailov’s photographs, really stand out. His book Case History (1999) is a kind of minstrel show of documentary photography; it involves a community beyond the fringe, battling the residue of Communism and the availability of cheap vodka. Their poverty manifests itself in physical abnormalities and bizarre malnutrition bulges, tumour-like protrusions that make the scenes more allegorical than documentary, and in the bright colours of their glad-rag costumes, ultra-peasant, clashing and arresting, like characters from Hieronymus Bosch after huffing fumes from a paper bag. The pictures’ oddness is due not to the representation of these homeless people, but to the small theatres they concoct by re-enacting the simplest, and often most dangerous, activities – sleeping outside, having sex for money, being abused by forlorn teenagers – for Mikhailov’s camera.

Try looking first through ‘Dance’ (1978), a body of work you can find in Mikhailov’s Hasselblad Prize monograph (2000). Here, a group of older Russians and Ukrainians share a dance session in a town square. Nostalgia is the obvious subject. The women’s faces give way to pleasure, while the men seem to hold back. Mikhailov captures the beautiful way women relate to one another in small town dances. You can see it in movies like The Godfather (1972) and Urban Cowboy (1980). There are always more women who want to dance than male partners, so the women often swing each other around. It summons up images of World War II for me, when women filled in for one another’s missing husbands. But you fill in the blanks in Mikhailov’s photographs – we can’t tell the good guys from the bad, or the happy from the pathetic, because we don’t speak the language.

Couple and trios are often the focus. Pietàs, newlyweds, the tired cliché of the photographer and his nude, just another metaphor for inequity. Mikhailov’s presentation of the dance here is analytical but contradicted by the soft edges of the scanned family-album-style pictures. After all, this is a world created from restraint and forced pageantry. The dance as social escape is studied, the nostalgia to which we look back on these small town escapades, the way working class men of a certain generation will always wear suits, or at least split suits, perhaps a jacket surviving while trousers come and go.

No one in my family danced. We are not a family of dancing ex-Ukrainian Jews.

The images are beautifully colour-printed to highlight the rashes, the red slashes of once-grins, red-eyes from flash and that particular dull blond of the notoriously brutal Ukrainians. (I know a Jewish boxer from the Ukraine. They say he fights in Russian and prays in Jewish. I always wonder what the reverse would be like.)

I passed a sign in front of a church last week. It read: ‘The Soviet Union Killed Ten Million Ukrainians.’ I presume a Ukrainian was holding it. I thought about those Ukrainian guards in Art Spiegelman’s Maus (1973–91). My family is originally from the Galician region of Ukraine, and, as for many East European Jews, ‘originally’ and ‘from’ are like city and state, a zip code for the Diaspora. This digression, which is partly a diversion to introduce myself as Mikhailov’s audience, may also serve to reveal a certain coldness on my part. I confess to getting off on some of these pictures, in the same way I did as a young child looking at medical textbooks that showed babies with heads shaped like four-leaf clovers. They offer a chance to stare. Photographers, if they give us anything, give us a chance to stare at something so hard that we possess it – although, of course, we then want to give it back. The strongest, most perverse, of these pictures cannot be given back.