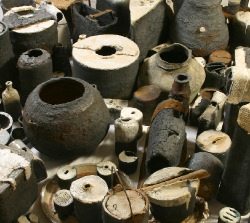 The Ligurian coast, the stretch of Italian Riviera near Genoa, has a history of ceramic production that spans centuries. During the 20th century the local workshops, or ceramic laboratories, attracted Pablo Picasso, Lucio Fontano and Piero Manzoni, among others. The Dutch artist Asger Jorn bought a house in the hills and turned it into a lively, spreading collage of ceramic filigree that was much admired by his friend Guy Debord. And Italian artists, including Wilfedo Lam, made floor mosaics of tessellating triangles for the promenade running along the beach at Albisola.

The Second Biennale of Ceramics in Contemporary Art was held in various locations in and around Albisola, and was an attempt to restore ceramic art to the status it enjoyed during the first half of the 20th century. Today ceramics are generally used as a camp or recalcitrant medium, a craft substance to be handled only with devout irony. The work in this biennale goes some distance towards quashing this bad image, while highlighting the problems of imposing a medium as the common thread. The ceramic is reduced to a recurring motif, a delimiting constant rather than a liberated choice.

In the year before the biennale, selected international artists were invited to stay in the region and work with artisans in the ceramic laboratories. (Only a few artists had worked in the medium before.) The final results of the residencies could easily have been crammed into a single gallery or museum, but this would have undermined the time and effort expended on the project. It is not often that the work for an entire biennale has been specially commissioned and the artists flown in to make the work on-site. In this sense the event is incredibly ambitious and well intentioned, with the policy of the international board of curators aimed more at nurturing experimentation than at shopping for pre-existing pieces. However, the inherent lack of control over the final content was damaging. The range of work felt like a deluge of personal variations on a theme rather than a measured representation of a medium. The clay was handled in so many ways, with so many agendas, that the only common currency was the hardening effect of the kiln.

Clay, like drawing, is malleable and can potentially be subjected to many modes of execution. However, as most artists were working with an unfamiliar medium, they did not appear to have enough time to assimilate this properly. It was as though they were either transposing previous working practice on to an alien process or hastily inventing a new position from scratch. As a result, there were numerous one-liners and much straightforward mimesis: for example, Bruno Peinado's television test card made from coloured tiles and Hong Myung Seop's giant fried eggs placed on the floor. The exactitude of ceramics was over-represented with moulded, cast and modelled double-takes, such as Iké Udé's folded shirts, Sylvie Fleury's gold tyre fountain, Vincenzi Cabiati's lumps of coal and Bertozzi & Casoni's incredible oil drums full of rubbish. Few revelled in the dirtiness of the medium: Carla Rossi's collection of pots and other unmentionable receptacles - a eulogy to making, hands-on and sordid - was a wonderful exception. There were, however, some works that displayed a successful control of material: Gabriel Lester's black bust of Julius Caesar with peep-hole eyes was necessarily slick, as was Corrado Levi's upside-down plinth on the Albisola promenade - an obvious monument to Manzoni.

As with many other recent biennales, politics, gender and identity issues came to the fore. This is to be expected when the curatorial remit is liberal internationalism, but here the urgent messages were lost in the fray, as uncorralled voices cancelled one another out. The recurring theme of fragility emerged, understandably given the delicacy of the medium. El Anatsui translated material frailty into the personal and political in his floor-based installation of giant broken padlocks, and real underpants apparently oozing blood. Nedko Solakov used clay as direct evidence of emotional vulnerability: he clenched pieces of clay during plane journeys, so that they became evidence of his fear of flying.

Ceramics is a means to an end that deserves, like many other so-called crafts, to be reinstated as a viable art medium. Perhaps the historical context does not help here, with its conservative or dated associations - many exhibitions were held among the pots and figurines of local, traditional collections. But hopefully the biennale will continue and effect a genuine reappraisal of an uncompromising yet responsive substance.