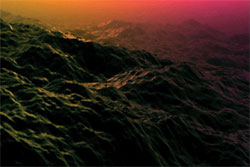 Decapitation rears its severed head throughout Seth Price’s work. Earlier pieces referred, for example, to Daniel Pearl (the American journalist beheaded in Pakistan in 2002) and to a widely circulated Jihadist execution video. In his three simultaneous and closely related projects at Friedrich Petzel, Reena Spaulings and Electronic Arts Intermix (EAI) Price used decapitation both metaphorically, in a helter-skelter of decontextualized images, and literally, in etchings based on Michelangelo Merisi da Caravaggio’s David with the Head of Goliath (1609–10). Excerpting archival work by Martha Rosler and Joan Jonas, background and stock footage, newsreels, advertising and computer effects, Price does what he can to mystify and complicate interpretation: to play, ultimately, with your head.

Given that images of decapitation and a vast array of other gruesome acts can be downloaded and disseminated at will, it’s startling how powerful Caravaggio’s Goliath remains. Addresses (2006) consists of nine oil-paint-smeared etchings that Price made using an Internet grab of the painting. He wrapped the small, dark gallery space in a continuous sheet of Mylar, covering each of the etchings. Allowing it to buckle and quiver at various points along the wall, Price propped the translucent roll at the entrance to the gallery, where it resembled a giant unspooling strip of celluloid film.

Inky, indeterminate darkness makes up a great deal of Goliath, and this darkness is echoed in Price’s 15-minute Untitled Film, Right (2006), projected continuously through a Mylar-covered viewing window in the back of the gallery. Using a six-second-long digitally generated background clip (known in film production lingo as a ‘gak’) depicting a roiling ocean swell repeated 150 times, Price separated the film into three movements, using his customized logo – a tutti-frutti-hued manipulation of ‘Panasonic’ that looks like any number of American toy trademarks. Its effect is a goofy self-portrait, a ‘brought to you by’ memento of the artist. Often garishly psychedelic, the gak turns from gold to black to grey, the effect nearly disintegrative. With its heaving, oily quality it resembles a great rolling aspic, a huge sea of jelly. Unlike the complex movement of real water, the gak is never more than undulating deadness, the connection to Caravaggio’s dead darkness nearly tactile.

Price uses the gak in both Untitled Film, Left (2006) and Digital Video Effect ‘Editions’ (2006), at Reena Spaulings and EAI respectively. Included are news footage of the 1981 assassination attempt on Ronald Reagan (suffused with psychedelic colour), Martha Rosler’s Meal in Three Courses (1985), a now seemingly obligatory reference to the World Trade Center towers, and casual 1970 footage shot by Joan Jonas of a conversation among Richard Serra, Robert Smithson and dealer Joseph Helman about the art world’s starker commercial realities. Presented in tiny bits and pieces, Jonas’ piece is perforated by various digital ‘spills’ juxtaposed with unappetizing advertising images of rubbery Swiss cheese. Price punctuates the prosaic conversation about artistic control in the market-place by letting the screen go black, leaving only a tiny, misshapen white blob as one of Jonas’ subjects says ‘the artist’s power’. Like an earlier cut-away in the Reagan footage to a bloodied secret serviceman’s shoes, the blob/power connection betrays the bromides to which Price is prone, often masked by his prodigious technical skills.

At his best, as with the gak/Caravaggio correspondence, Price delves into the negative spaces of seemingly mundane images. In his excerpts from food advertising, smarmy pre-pubescents and treacly talking animals shill for the creamy and the sweet. Price ‘voices’ them with manipulations that sound like a slowed-down Stephen Hawking humming Walt Disney’s ‘It’s a Small World’ (1964), spotlighting the dark place to which the commodified world expels children and animals. This culminates in the one truly searing image of the entire suite: outsized pixels with the cute voices of children and animals clustering into what looks like a Thanksgiving dinner platter, but which resolves itself, in a split-second agglomeration, into the image of a bullet-lacerated brain.

Both films were screened using projectors, whose rattle and whir are akin to the sound of clattering typewriter keys and hint at a nostalgic streak undermining Price’s surface toughness. This was especially evident in an untitled vacuum-formed polystyrene wall piece from 2006 incorporating excerpts from his production notes such as ‘seemingly random violence is the [sic] tool for undermining the values of the Enlightenment’ or ‘representation itself makes the body absent’. The sententious or, perhaps more troublingly, naive jottings lend weight to a suspicion that, despite his use of politically loaded and confoundingly powerful imagery, Price too often settles for the obvious.