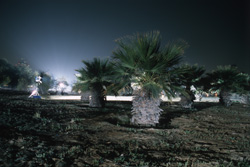 As I waited in an idling minivan to be shuttled between the Sharjah Biennial’s two main venues – the Expo Center and the Sharjah Art Museum – with the concrete shells of buildings and hovering construction cranes looming above me and the air conditioning blasting against the searing heat outside, it was all too obvious what kind of insurmountable obstacles the Biennial’s curators faced when they chose to host an exhibition called ‘Still Life: Art, Ecology, and the Politics of Change’ in the Emirate of Sharjah. By choosing to focus on art’s relationship to environmental sustainability, they critically booby-trapped themselves: bound to flying in dozens of artists, press and other visitors on long-haul flights to a land experiencing an unfettered development explosion fuelled by fossil fuels, there was seemingly no escape from the contradictions. And choosing such a mucky, difficult theme called for mucky, difficult art works, only a few of which were on view here. As a result, the rest seemed like so much wasted energy.

A number of works only superficially grazed the subject of the fate of our environment (confusing it instead with the genre of landscape or the literal act of recycling). I couldn’t help feeling that there was a missed opportunity here – if you could take away the politics of having to host an international art exhibition on a par with those of its stakes-raising fellow Emirates, Dubai and Abu Dhabi, the Sharjah Biennial could have conserved the energy it expended on installing works by some 80 artists to instead focus on just a few, gripping, site-specific projects.

A perfect example of this concentrated potential sat in an abandoned lot behind the Expo Center, where the curators had attempted an ambitious staging of Gustav Metzger’s Project Stockholm, June Phase I (1972), a project originally conceived for the UN environmental conference 35 years ago. Metzger proposed lining up 120 idling cars around a transparent cube that would collect their exhaust fumes. (In Phase II, the cars would have been driven into the cube to self-combust.) In this realization, all the cars were positioned and started; the only problem was that the container was formed only of scaffolding loosely covered in plastic, so rather than being collected, the exhaust from 100 rented Toyotas simply blew into the air.

While Metzger’s art was designed to self-destruct, the younger generation’s efforts here were tamer. Tue Greenfort’s modest proposal had a pervasive impact: for Exceeding 2ºC (2007), the artist raised the temperature in the Sharjah Art Museum (ordinarily kept at temperatures so chilly as to make viewing uncomfortable), by two degrees for the duration of the Biennial. (With the money saved on energy costs, a piece of rainforest in Ecuador will be purchased.) In addition, he taped clear plastic across the opening of his exhibition space, creating a bubble that appeared to inhale and exhale with the pressure of the museum’s air conditioning vents. His work successfully incorporated form and function, in both an ecological and an institutional critique.

Several outdoor works installed in the city’s Heritage Area – a labyrinth of recreated traditional buildings – attempted to engage with Sharjah’s ‘heritage’, but were dwarfed by the surrounding generic skyscrapers, which are efficiently wiping out that history. One site-specific project particularly highlighted this friction: Graham Gussin constructed his Illumination Rig (Island) (2007) on a disused, man-made island in the middle of Sharjah’s central Khalid Lagoon. Rickety wooden boats ferried visitors to and from the island through the lagoon’s inky, polluted waters each night. Exiting the boat and stepping on to the dirt, one found this spooky mass of land illuminated by large movie lights that eerily spotlighted scattered McDonald’s wrappers, old fire pits left over from teenagers’ parties and the occasional rat scampering in the bushes. This island tour was like experiencing the future of Sharjah, or, indeed, any place on the planet, only to find the depressing remnants of man’s mess. Gussin managed to trap this discarded piece of land – and the scraps of human presence on it – in the harshest possible light. If I had visited Sharjah only to find this one piece, I would have left with the feeling of fear and urgency that the subject of the Biennial called for.

Ultimately, though, the problem with a Biennial themed around change is that the structure of the exhibition itself must simultaneously work toward that change. Unfortunately, in a country where even the Ruler’s daughter, who also happens to be the Biennial’s Director, can’t join him at the opening night’s gala dinner because she’s a woman, there are apparently a lot more immediate changes to be made.