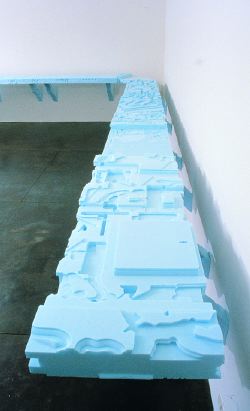 In her latest show, 'Polymathicstyrene', Shirley Tse demonstrated that she's capable of merging the traditions of good, solid craftsmanship with a showroom-style presentation. Having devoted herself to an aesthetic inquiry into plastics for the past several years, Tse has now turned her attention to extruded polystyrene. This almost weightless, familiar foam, is ordinarily found lining the insides of large objects and thus most often remains hidden from view. Tse has liberated her chosen material from its utilitarian function and laid it out in plain sight, but only after carrying out a make-over that renounces its original banality.

Although the role of plastic in our lives is most often associated with those secondary surfaces (kitchen counters, shower curtains, computer housings) that are overlooked once installed, Tse seeks to both highlight its presence and expand the vocabulary of its visual language. 'I wish to articulate plastics as a phenomenon of flow in a way that is not restricted to the use of metaphors of the human body' she writes in an artist's statement. The sense of flow she seems to be after can be detected in the striking transitions from one treated passage of polystyrene to another. Tse takes slabs of the stuff and renders the surfaces into an extremely diverse variety of patterns and low-relief formations that were presented in the gallery as a series of interconnected sculptural shelves. Her various ways of handling the material can lend it a decorative, fleetingly engaging look, but the bulk of it is more suggestive and complex, appearing to reveal reduced-scale versions of alternate worlds.

Perhaps the first association that strikes the viewer is that of models, or miniature sets, used as backdrops for battles among spaceships and Death Stars in science-fiction films. These Star Wars connotations, vivid despite the monochromatic simplicity of the polystyrene, jibe well with the futuristic implications of plastic that were promoted after its first fully-fledged incarnation as Bakelite (developed by Leo H. Baekeland) early last century. Yet, at this stage of the game, there is little about plastic that shocks or provokes more than passing recognition - it's everywhere and we take it for granted. So, once involved in fantasies of microcosmic universes, one can momentarily forget about the socio-economic aspects of Tse's preferred substance and admire her ability to manipulate it.

A great deal of labour has gone into the production of Tse's sculptures. Like the designers who invent props for cinematic special effects, she spends a lot of time in the studio whittling the base material into an array of forms, some of which end up in the final installation. The cyborg connection is apt, especially in relation to the supporting columns that hold up the sculpture platforms. Each one is given a unique shape, carved out of the same polystyrene, some possessing a kind of robotic muscularity, others giving off the architectural air of Gothic flying buttresses. As in the horizontal panels, it forces your gaze to zoom in and out, digesting vast leaps in scale from one section to the next (besides the condensed-space phenomenon, there are intimations of circuit boards and computer chips - blow-ups of the infinitesimal). After a few rotations around the perimeter of the gallery, I became dizzy from the rapid optical adjustments. To experience the imaginative flow of the installation requires mental flexibility on the part of the viewer.

Tse does occasionally give the eye a rest when she provides some simple geometric or bio-morphic patterning for a more superficial and less narrative-oriented experience. Interestingly, some of the sloppier moments of gouging and carving show up in these areas. The repetitive impressions of a drill bit or other sharp implements, when not serving to conjure up such images as the landscape in the American Southwest, merely look like aesthetisised markings. Indeed, these regions of decorative respite actually provide the clearest trace of the artist's hand, at least as far as it is mediated by a tool. The irregularity in parts of 'Polymathicstyrene' occur primarily when Tse repeats a gesture, such as a series of shallow borings into the surface. Attaining a look of seamlessness does not appear to be Tse's goal. By allowing the artist's touch to remain an integral part of the work, she temporarily shifts the plastics industry away from the machine aesthetic and onto the pre-industrial terrain of the handcrafted.