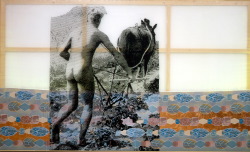 Solo exhibitions at Tate almost invariably take the form of retrospectives - in its London incarnations, the gallery leaves large-scale shows of a single artist's recent work to the city's major 'kunsthalles'. The exception that comes to mind is 'Late Picasso' in 1988. Picasso, though, had been dead for over a decade, and happened to be the 20th century's most famous artist.

'Sigmar Polke: History of Everything' at Tate Modern comprised work from the last five years. Polke had a Tate retrospective in 1995 and, although it was in Liverpool and rather lean, eight years may have been too brief for a larger, updated exercise in the capital. Still, nine galleries at Tate Modern given over to just five years' output confer special status on an artist. The anomaly makes one wonder if there's been a major shift in Polke's practice during the last five years, or if the recent work has special meaning for art in particular and society in general.

Regarding new developments, 'History of Everything' reveals an artist at ease within the conceptual and formal parameters he established long ago. Polke's trademarks are all here: the painstakingly rendered benday dots; the resin-soaked translucent fabrics which bring the stretchers' underlying cruciforms to the surface of the image; the substitution of two or three garishly patterned fabrics for canvas; the carefree ectoplasmic, ejaculatory paint trails; the disjunctive combinations of imagery drawn from current affairs, histories and fables. To begin with, techniques such as these represented a radical affront to the unity of painting as understood by the Modernist tradition. Polke's works were everything painting wasn't supposed to be: vulgar, mocking, parodic, decorative, heterotopic, discontinuous, self-reflexive and self-critical. Here was an anti-idealist pursuing the 'The Three Lies of Painting' (as proclaimed by the title of his 1997 German retrospective). By the 1980s Polke was the consummate and emblematic Postmodern painter. Under his influence, adjectival pejoratives such as those employed above entered the critical lingua franca of contemporary painting, and remain there to this day.

We've probably now reached the point where we can speak of Postmodern masters. If we have, Polke, unarguably, is one of them. With little left to subvert, his practice now refers back to itself before anything else. Apparently arbitrary combinations of imagery, material and style that once suggested an alarmingly de-centred practice now trigger an immediate sense of recognition. Features that once drew their meaning by seemingly not being his, now seem to be almost compulsive traits: we imagine Polke still obsessing over minute printing errors, over the aleatory stretched effects made by moving an image while it is being photocopied, over the bacterial and toxic-looking residues brought about by mixing resins and paints with foreign substances. In details such as these, especially where unpredictable processes are involved, Polke's work retains a capacity to surprise and instill wonder. This is especially so in a series of seven medium-sized, thickly layered works - the earliest in the exhibition - that suggest various coagulated microcosms: sticky honeycomb; the human brain; obscure samples in Petri dishes; oily, broken-down newsprint.

As you'd expect both of this artist and of an exhibition titled 'History of Everything', the cast and props are bewilderingly varied: they include naturalists, Oriental magicians, a table-dancer, antique hot air balloons, monkeys on see-saws and Victorian fairies. Beside this mélange, the works have a principal focus in a loose confederation of works made for the exhibition's other showing at Dallas Museum of Art. These centre on Texas' scarily prosaic gun culture and (via the Texan son who currently holds presidential office) the 'War on Terror' which threatens to redraw the geo-political frontiers of the Middle East. New 'machine paintings' - digitally retouched photographic images printed on vinyl - hang in various rooms, sometimes lending context to, and revealing the sources for, the obscured imagery in the paintings proper. It's the works that focus in on details of newspaper images of the Afghan war, rather than the relatively straightforward, Warholian renditions of images at Texan rifle ranges, that have the most to say about the interrelationship of image, observation, transmission and firepower. I Live in My Own World, but It's OK, They Know Me Here (2002) is a vast painting on silver and tie-dyed fabric of two Taliban soldiers on horseback. Resembling giant squashed flies, their barely discernible image is conveyed by a vastly magnified handful of smudged printing dots. They don't stand a chance. A machine painting representing the newspaper graphic from which the image derives shows how it takes just a second and a half to beam the image from a Predator surveillance plane to US High Command via a satellite 7600 metres away in space, and a few seconds more to launch a missile attack. That's a lot less time than it takes the viewer to process that information from the machine painting, move from there to I Live in My Own World in the next gallery and apprehend the scale-shifting relationship between the two works.