Signs of the Times

Matthew Darbyshire’s architectural interventions, installations and displays of consumer objects hone in on the gap between what is promised by those who shape our world and what is actually on offer

In 2010, during the dying months of the last Labour government, the British artist Matthew Darbyshire installed a hoarding on the anonymous façade of Herald St gallery, in London’s historically working-class neighbourhood of Bethnal Green, announcing that this former industrial unit would soon be torn down to make way for a new building. Named ELIS after the ancient Greek district in which the first Olympiad was held, this fictitious development would comprise luxury apartments, a mandatory smattering of social housing and various public amenities and retail outlets. It would be completed in time for the opening of the London 2012 Olympic Games.

Passed by at a Londoner’s hurried clip, the lime and hot-pink phrases printed on the hoarding blurred one into another: ‘ENTERPRISING’ into ‘RENEWABLE’, ‘SURVEILLANCE’ into ‘COSMOPOLITAN’, ‘DESIGNER’ into ‘SOUL’. What they pledged was not so much a new building as a new social reality, in which the pursuit of fashionable urban lifestyles by the few guaranteed benefits for the many: a booming local economy and a greening of the borough, safer streets and a celebration of cultural difference, a general upping of the aesthetic ante and a widespread sense of spiritual amplitude. Never mind the gallery’s immanent eviction, it could always relocate to someplace cheaper, and prepare the ground for the arrival of ELIS II.

In among the hoarding’s buzzwords, silhouetted figures exercised in Photoshop mock-ups of the development’s Energy Zone, sipped lattes in its Lifelong Learning Centre, and fired off emails in its Multi-Faith Perspective Chaplaincy before communing with their gods. So attuned was its language and imagery to the breezy argot of ‘regeneration’ that it was only by scrutinizing it closely that its absurdity, and its possible status as a work of art, became clear. Darbyshire steadily piled detail on incongruous detail: a Polyclinic, a Community Dance Theatre Space, a Tesco Express, each component of the development rendered almost indistinguishable from the others through a shared vocabulary of candy-coloured Perspex, brushed aluminium and slatted wood. If ELIS was a vision of a contemporary Tower of Babel, this impression was only heightened by the words stamped on the hoarding’s Dibond panels in Pantone Printer’s Blue, which often felt unmoored from any clear referent, like verbs deployed in a speech by Tony Blair, or his rhetorical heir David Cameron. ‘SKATE’ and ‘BLINK’ appeared in close proximity, evoking a weekend Vans-wearer who likes to kick back and relax with Malcolm Gladwell’s hit 2005 pop-science book on the adaptive unconscious. Such, we might imagine, were the intended habitués of ELIS, a building that – had it ever risen up into the east London sky – would surely have become yet another pseudo-modern, Private Finance Initiative-funded neo-ghetto, a future ruin conceived in the springtime of New Labour optimism but born into the cold shadowlands of austerity Britain – a nation in which every novelty T-shirt and tea-towel bears the same pitiless message: Keep Calm and Carry On. 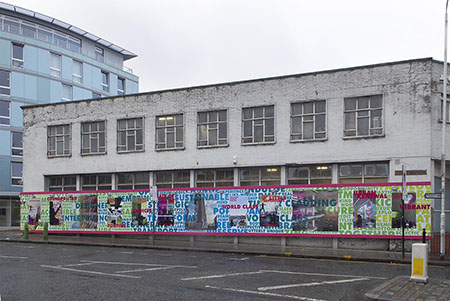 At the centre of Darbyshire’s work is the observation that certain core human concerns – among them the look and feel of the built environment, the intersection of art and the social realm, the idea of community and a collective hope for the future, even the possibility of visual pleasure – are very often framed in ways that are reductive, philosophically empty and serve only to further the interests of embedded power. His architectural interventions, sculptural installations and adroitly choreographed displays of consumer objects point with an almost Kafka-like alloy of horror and helpless laughter to the gulf between what is promised by those who shape our world (a new Elysium, say) and what is actually on offer (ELIS) – a gulf that causes us a hard-to-locate but nevertheless deeply felt kind of pain. Unusually for an artist who belongs to a generation that regularly revisits episodes from the (usually Modernist) past, Darbyshire’s focus is on what he has calls the ‘mush and fug’ of contemporary Britain’s visual environment, something that in a high-wire act of chromatic and formal management he sequences into works that, while they speak eloquently of the queasy homogeneity of much present day architecture and design, also have a resonant sculptural presence. We might think, here, of his An Exhibition for Modern Living (2010) [commissioned by Lisa Le Feuvre and the author for British Art Show 7], in which he used a Donald Judd-by-way-of-ikea shelving unit to display a collection of colour-coordinated objéts trouvé (including a magenta repro Arne Jacobsen Egg chair, a gold lamé American Apparel windcheater, a toy elephant printed with a pink Union Jack, and a gilded statue of Ganesha), taking advantage of their cosmetic correspondences to braid their very different orders of taste, authenticity and meaning into an unpickable Gordian Knot. Even when Darbyshire does take a rare look back, it is not to seek solutions, or even refuge, in an aesthetically or politically appealing historical moment – his 2009 installation Palac, first shown at the fourth Tate Triennial, took elements of the Stalinist power trip of Warsaw’s 1955 Soviet Palace of Culture and Science and gave them a ‘facelift’ inspired by architect Will Alsop’s 2008 West Bromwich arts centre The Public, a globular monument to failed civic renewal and patronizing community outreach. Committed to the here and now in all its mulchy, foggy, psyche-saturating tawdriness, we might imagine his works announcing, in an ironic echo of Prime Minister Cameron’s favoured hard times catchphrase, that: ‘We’re all in this together.’

Accounts of Darbyshire’s project often present it as journalistic or polemical in nature, as though his purpose was – like Anna Minton’s 2009 book Ground Control or the architecture critic Owen Hatherley’s 2010 A Guide to the New Ruins of Great Britain – to expose the role ‘regeneration’ plays in the erosion of the public sphere by private interests, and a more general drift towards an ‘experience economy’ that commodifies every aspect of human life. While this is to some degree persuasive (these are, after all, subjects that Darbyshire addresses), it risks forgetting the work’s compelling sensory aspects, the fact that this is art informed by art-specific concerns, is something funnier, weirder, more corporeal and a great deal more complex than straightforward social critique. In Blades House (2008), the artist transformed London’s Gasworks into an ex-local authority family home that had been refitted as a private bachelor pad for an upwardly mobile 30-something ‘creative’, kept company only by his own reflection glimpsed in the surfaces of his overabundant and decidedly chi-chi consumer durables. If this solipsistic nightmare-space spoke of a shift in the capital’s demographics, it was in tones that emphasized the horror vacui of looking for solace not in people, but in things. Another sculptural environment, Funhouse (2009), presented at the Hayward Gallery’s Project Space [curated by the author], appeared to take the form of an interactive installation. Here, the wacky features of the traditional fairground funhouse (ball pits, wobbly mirrors, undulating floors) were re-imagined in the homogenous ‘visitor friendly’ design language of recent British public and corporate architecture, seen everywhere from libraries to arts centres to mobile phone concept stores. If such buildings claim to embody the liberal humanist values of inclusivity, diversity and choice, but in practice offer little more than uncritical and stage-managed ‘fun’, even this was in short supply in Darbyshire’s 21st-century house of horrors. Forbidden to touch the work, and increasingly creeped out by its nonsensical upbeat slogans, lurid colours and utter lack of functionality, gallery-goers were left to ponder just what it was they were being sold, and at what price they’d been bought. 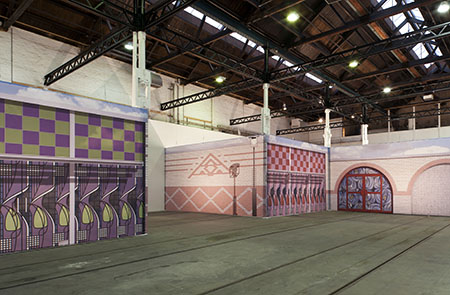 Darbyshire’s recent installation T Rooms (2012) in the former Victorian tram shed of Tramway, Glasgow, saw the artist move towards a vision of the near future. Here, he stretched a vast printed banner resembling a developer’s ‘site wrap’ between the space’s pillars, bearing images of a building project that would see the arts centre repurposed as a gated urban village, just as soon as Britain’s battered economy picked up. Borrowing its motifs (lattices, tulips, skinny roman numerals) from the celebrated fin de siècle Glaswegian architect and designer Charles Rennie Mackintosh in a facile and all-too-familiar display of ‘local sensitivity’, it rendered them in cheap artificial veneers, suggesting a new spin on the nostalgic cultural politics of the 1980s, in which the radical past was to be simultaneously sullied and co-opted to aggressively conservative ends. Significantly, nowhere did the wrap suggest a point of ingress or egress. Each passage of virtual sandstone and cedar cladding, each slatted window and blind niche, appeared designed to keep people in, or out.

Walking through the gallery space, visitors encountered works made by Darbyshire in collaboration with other artists and thinkers: a film in which Owen Hatherley meditates on mass-produced vernacular housing styles; a number of photograms made with Jacob Farrell that eke an odd poetry from the vinyl ‘virtual shopfronts’ that have become a common feature of Britain’s half-abandoned high streets; and a kind of three-dimensional zine made with Scott King in which a number of politically charged, pachyderm-themed objects – including a Republican Party mascot and a colonial-chic elephant’s foot umbrella stand – were juxtaposed with fictional quotes from various ‘socially-engaged’ British celebrities, including a broadside against benefits fraud by the tv chef-cum-nutrition-activist Jamie Oliver, and a coked-up hymn to the celestial expanse of the human spirit by the sculptor Antony Gormley. In the far corner of Tramway’s space stood a final collaborative work, an open-sided smoking shelter made with Rupert Ackroyd in comically over-determined ‘Mockintosh’ style. This is where T Rooms left us – outside the citadel, feeding our suicidal addictions, at the mercy of whatever winds might blow. Here we might cough and huddle, and try to remember the dreams we’ve been persuaded to forget.