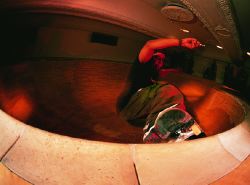 SIMPARCH is an artists' collective which was founded five years ago in Las Cruces, New Mexico. Together with Hamza Walker and Chris Vorhees they transformed Chicago's Hyde Park Art Center into a plywood skatebowl for two months. A faux-grand former ballroom, complete with high ceilings and classical flourishes, was fitted with an elevated kidney-shaped skateboarding basin which echoed much more than the fatigued rhetoric of sculpture as architecture or even of sport as performance.It tapped into the complex spatial and social practices of youth as a positive expression of freedom and power.

With its focus on athletics and aesthetics, skateboarding has developed into a unique youth sub-culture. Free Basin was a project that welcomed anyone with a board and an insurance release form to drop-in and grind. What you saw upon entering the space was the skatebowl's underside. Precision plywood ribbing and adjustable steel posts suspended the massive shell and bisected the gallery. The gallery's narrow spiral staircase allowed access to the platform where music blared, visitors lined the walls and males in baggy pants cocked their boards over the concrete grinding lip that contoured the basin waiting for their turn to drop-in.

SIMPARCH's clean design is utopian in the sense that it references the word's original meaning 'no place' rather than its common definition 'better place'. An emphasis on 'no-place' is unique to skateboarder fashion. Its preferred look is neither optimistic, pessimistic, nor nihilistic. SIMPARCH is as American as N55 is Scandinavian Socialist. Like the parking lots and footpaths that fill the landscape, skateboarders are drawn to non-sites in an attempt to resist socially assigned definitions.

The social dynamics of Free Basin are not simple. It exaggerates class tensions between affluent suburban and urban youth culture, evoking the slippery line between art and entertainment, entertainment and recreation, between perceptions of delinquent and 'normal' youth. Yet the most salient of all issues it addresses is the demarcation of a space in which identities and issues of belonging can incubate. Young males are often considered undesirable occupants of public spaces. Often, it is only TVs, DVDs, computers and magazines which allow them total access to public - albeit virtual - spaces. Like raves and clubs, this temporary skatebowl is a sample of the geography that can empower and orientate.

Its massive presence, the skill and material economy that went into its construction and its tight, uncomfortable fit high into the gallery neutralised some of the obvious flags that arise in regards to the project's location as art. In an essay 'Is It a Skatebowl or a Sculpture', which was written to accompany the exhibition, Hamza Walker suggests it could be celebrated as pure geometric form or even more appropriately as installation art. He goes on to say that 'in this instance, the specimen is skateboarding, in particular bowl skating, whose reliance on isolated and idealised conditions have made it that much more suitable for museum display'. As for art, skateboarders assess it according to its turf, terrain (number bowls, hips, ramps, and runs), cost, safety equipment requirements and proximity to food and drink.

Regardless of the complex responses that this simple gesture and impressive form can evoke, you couldn't help but be moved by the large groups of young men skating the beige wood-grained bowl. The constant hum of the urethane wheels careening within its contour transcends the physical limitations of body, sculpture and architecture into the realm of social psychology and the geography of our youth. An exotic landscape indeed.