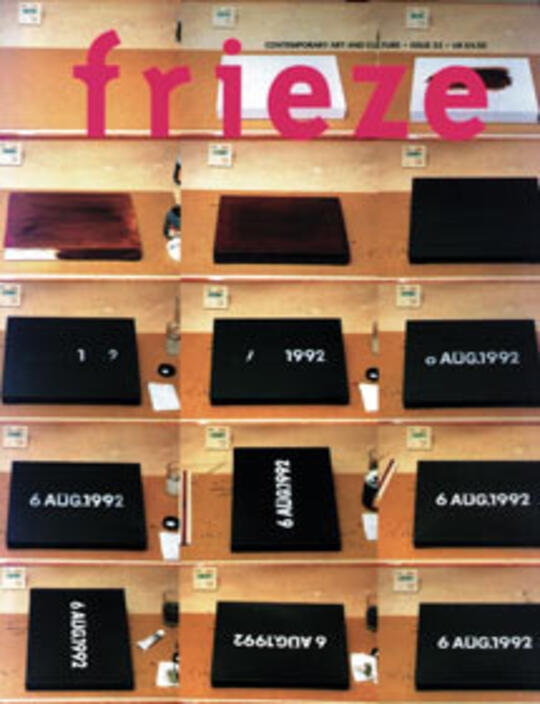 Do we need a mass debate?

There is a bizarre and defensive truism about Birmingham I remember hearing often while growing up there; that the city has more miles of canal than Venice. As the place that regularly leads national polls as the least desirable place to live in England, Birmingham has been keenly aware of its image problem for many years. Various efforts have been made to redefine a once powerful industrial centre as an equally important cultural one; a glut of public sculptures of drastically varied quality now jostle for attention in the city's squares, and three enormous shopping malls stand almost back to back in the city centre, their names pretentious and disorientating - The 'Pallisades', 'Pavillions' and 'Plaza'. To add to this confusion there is the centrally-located National Indoor Arena and the National Exhibition Centre on the city's outskirts. The NIA is perhaps best known as home of the TV series Gladiators, the American import that has found a devout following across the country, while the vast NEC provided the ideal location for Monarchy: The Nation Decides, the recent television debate about our favourite family soap and its current image problem.

The opening graphics, all spinning golden pound coins and serif type against a shimmering British flag, set a nice Regal tone as our host Trevor MacDonald invited us to join him 'in the biggest live debate ever staged', asking the big question, 'Do You want a Monarchy?' This question was to be discussed by a studio panel, while throughout the show we at home were encouraged to ring in with our own verdict ('the biggest phone-in ever'). The studio audience of 3,000 ('the biggest ever assembled') was, we were informed, 'hand-picked' from over 20 major cities to represent ordinary people from all walks of life; 'from housewives to national heroes, accountants to Olympic athletes, world cup-winning footballers to window cleaners' and so on. They were there to help our decision-making with a series of instant polls. As it transpired, a lot of them seemed to be under the impression they'd been brought to Birmingham for an evening of Gladiators, their shouts and taunts of the kind usually reserved for 'Wolf' and his lycra-clad combatants.

Several panellists initially attempted to redefine the over-simplification of the question itself; were they here to debate the future of the monarchy as an institution or that of the current Royal family? Such subtleties were apparently not appropriate, and within minutes the speakers could barely be heard above the racket the audience made each time they attempted to speak. Each panellist had a maximum of half a minute in which to comment, which was often just enough time to regurgitate some long standing animosities between those present. Frederick Forsyth (Monarchist) in surly and belligerent form, continually swiped the air in front of him with a pencil like an intolerant headmaster; 'Shut up' was all he offered a lame point made by Andrew Morton, the man whose biography of Princess Diana 'seemed to have been written by someone for whom English must be their second language', as another panellist couldn't resist saying. Morton, looking wounded and keen to display his razor sharp debating skills declared apropos of nothing that 'the buck stops at Buckingham Palace', a phrase so obviously premeditated and yet so pitifully weak that no one bothered to respond.

Interspersing the debate we met some members of the audience and gained their views on this serious matter. John Stapleton picked his way across the aisles to interview a couple of harmless eccentrics glad to be given the opportunity to publicly declare their daft obsessions. There was the self-appointed 'Queen Margaret of North Wembley', who wears a crown while on the throne (the variety found in the smallest room in most homes rather than the one reserved for HRH); further entertainment was provided by Mr Andrew Parkes, who was very pleased to announce that he watches a video of the Queens Christmas speech every day at 3pm. 'Sad!' shouted someone sitting two rows back, a sentiment echoed later in the programme when we heard that the Sun newspaper's considered response to the debate would be an interview with Mr Parkes the following morning. In jarring contrast was the genuine embitterment of an 'old soldier' who having once fought for Queen and Country, felt he could no longer support a monarch who allowed so many elderly to suffer hardships far greater than those endured fifty years before.

To remind us all that our national heritage was at stake a large crown hung fatefully over the panel, while Ye Olde-style standards demarcated the representatives from each part of the country. Some members of the audience had got a bit carried away with the whole thing. There were Pearly Kings and Queens, Roundheads and Cavaliers, an assortment of peasants and a Druid King. The audience's voting cards had bluntly political connotations - 'Royal' (Conservative) blue one side, 'Republican' (Socialist-Commie-infiltrators) red the other, and an ominous drum roll sounded each time they appeared. While some members of the panel had fairly logical arguments for dissolvement of the monarchy, they generally met with hostile rhetoric, several of the pro-monarchists alluding that the Republican cause shrouded sinister Marxist desires to undermine the very fabric of society. Claire Rayner did her best to state a well-reasoned case against the Royals, but only succeeded in provoking an entertaining attack by a former fan in the audience who hysterically pointed her finger, accusing Ms Rayner of high treason.

By now the usually stony-faced Trevor MacDonald looked to be distinctly enjoying himself, the yelps and cries accompanying his every word causing him to gaze around the packed auditorium in slight disbelief, no doubt finding the unscripted mayhem rather more exciting than his usual appointment at the News at Ten studio. As the situation worsened (or improved, depending on your perspective) things became strangely reminiscent of the scene in Spartacus when, having revolted, the gladiators roar with amusement as they force their former masters to fight each other for their lives. The embattled panellists, slightly strained by the constant taunts and meaningless cries, became increasingly tired of their opponents and seemed uncertain whether to use their precious 30 seconds to beg the audience to stop or to shout at each other.

And so it continued. By the end of the evening the panel themselves had agreed on nothing, other than that they really didn't care for this kind of forum any longer. The long awaited result of the phone-in vote ('the biggest ever', we were told once again) was both predictable and open to interpretation. Yes, 64% want a monarchy, and well, no, an awful lot of people don't. As if to finish on an upbeat note MacDonald barely concealed a smile as he asked the camera, 'Would you like to see a King Charles and Queen Camilla?', the cacophony of laughter and booing behind him bringing an evening of intelligent knife-edge debate to a satisfactory conclusion.

More disturbing than the programme itself was the press coverage that followed. After an initial wave of condemnation a second round of commentary saw a backlash, with claims that critics of the programme were elitists who had no conception of what the vast majority of people wanted, the record-breaking figures of both viewers and voters interpreted as clear vindication. The word 'ordinary' was used a lot, a suspicious term coming from any section of the media. Quite who 'ordinary' people might be became a very grey area, as the dense political and class issues raised by the programme's subject were hardly touched upon.

The format of a panel debate before a studio audience is well established, a platform for discussion on issues of national importance that while popular, can hardly compete with Noel's House Party. While Carlton Television were astute enough to devise a programme that resulted in record-breaking viewing figures and extensive media coverage, its success as an ongoing format seems less assured. The initial jolt at seeing a serious issue treated as light entertainment and the ensuing disorder it created eventually gave way to a feeling that here was something slightly unsavoury, a derisory attack on intelligent reason rather than radical ground-breaking television. What made The Nation Decides... so successful was also what made it farcical - as well as untenable - on any other topic, with the possible exception of capital punishment.

As with television, popularity is an important issue for the present day Royals. To be perceived as dignified yet not aloof is a difficult balancing act only exasperated by a generally hostile and invasive media, and while the outcome here was declared a resounding vote of confidence for the monarchy, the meaningless way the verdict was reached made it seem a rather hollow victory. It's worrying that a televised phone-in might be interpreted as legitimately democratic, naively reflecting the widely-held acceptance of the television's authority. As the medium continues to explore and sate our craving for the exploitative and the sensational, so the quality of programming is compromised, and if The Nation Decides was prophetic it was only in its indication of this. Ultimately the programme would have been less sinister and more entertaining if Carlton Television had ditched its allusion to such noble (excuse the pun) intentions. Personally I doubt I'd bother to sit through another similar two hours. Unless, of course, there was a guarantee of some really serious trouble.