So Different, So Appealing

It was fantastically grim at the beginning of the 1970s. I don’t mean the disastrous economy or the impending possibility of Civil War UK – I didn’t know or care about any of that. I mean the hippie overhang: the apparent takeover of all the wonderful new 1960s’ industries of human happiness – popular music, cheap fashion and media generally – by a hideous, half-educated, long-haired polyocracy. People who thought The Dark Side of the Moon was the self-evident highpoint of human endeavour and that, say, Phil Spector’s Wall of Sound or Memphis – perfect pop or black music – were only for children or plebs.

Roxy Music at the Royal College of Art in 1972

I don’t know what I’m talking about here, of course. I never listened to, let alone bought, anything by Pink Floyd, Led Zeppelin, Yes, Free or any of the other Old Grey Whistle Test bands, as I thought of them. I’d turn off the radio or television when they came on. I’d stopped reading the NME or Melody Maker because they featured this person called King Crimson.

Somewhere half-way between Blood and Soil nastiness and a very late debased Pre-Raphaelitism, long-hair music was the downside of the Butler Education Act and the expansion of UK higher education. It was a terrible price to pay. The refuge in my gang – and though I never went to art school, I had enough Royal College of Art and St Martin’s friends to have copped the attitude and the chat – was in a highly developed ironic take on Top of the Pops stuff – the kitscher, sparkier bits of what remained of mainstream pop and black music.

So, for instance, the only thing I liked in that terrible hippy mud-bath film Woodstock (1970) was the 1950s’ retro act Sha-Na-Na, with their dance routines and gold lamé suits. We made a point of it in the cinema, hissing at Joe Cocker and Arlo Guthrie but hooting for the boys. And we deliberately laughed at the wrong, sacramental moments in Easy Rider (particularly that ‘doing your own thing in your own time’ line). We were making a point. Somewhere there’d be a place for us and music for us.

And in December 1971 there it was: David Bowie’s Hunky Dory. It was a seriously good start: a lovely camp cover, a song about Andy Warhol, lots of the right high art/low life references. Lots of London clubland. But there was still that Bromley Arts Lab pretentious hippie overhang. He’d still got long hair and, worse, everyone knew he’d done mime.

But the following summer Ziggy Stardust was released, and everything was redeemed – by the cover photograph for a start. That perfect orange brush-cut (now the mullet of mullets but back then a serious challenge to the world order), that perfect Ragland street setting, so obviously The Man Who Fell to Earth.

And in that same marvellous month Island released Roxy Music’s eponymous first album. While Bowie had 1960s’ form, Roxy were completely new and, shamingly, it took a friend to make me buy it. ‘You’ve got to have it,’ said Delroy Lindo, now an actor who plays precinct police chiefs or brutal crims in Hollywood films. But back then he was only English, a 19-year-old Shepherd’s Bush black cockney with the Mod sensibility.

I’d never seen or heard anything so clearly made for me and my art-school manqué world-view. The cover, with Kari-Ann Muller in classic 1940s’ pin-up pastiche, all pink ribbons and silver platforms, was Big Biba Rainbow Room. The contents covered all the bases: the Warholian ones, the art history ones, the Ladbroke Grove, gay-friends-of-Hockney ones. Of course, Bryan Ferry looked fantastic and, despite all the unbearable cleverness, the music went like a train – plangent sax, driving drums – offsetting Brian Eno’s synth weirdness. They played at the Royal College of Art that year and then at The Rainbow, a Low Deco kitschfest in itself. This really was Tomorrow Calling.

A Roxy performance was Postmodern – chock-full of influences and quotations scratched and collaged into something quite fantastically new. Something that celebrated every kind of artifice going. The staging, the lighting, the clothes, hair and make-up (all of them credited, incidentally, on the album sleeve). The total absence of that terrible display of roots and authenticity you got in guitar-solo world.

Roxy Music became a national rallying point for art-school, fashion-land and every kind of Postmodernist going and, soon afterwards, a massive British pop act with single sales, chart action and fans. Part of Glam. The clever, upscale bit with all the smart cover-lines, like Bowie, but nonetheless part of the new market for great singles from men in glitter and eyeshadow. A market of kids born in the 1960s who thought the Rolling Stones were ugly old men. The marvellous Slade – ‘hod-carriers wrapped in Baco-foil’ – and the brilliant Sweet with their three-minute epic poems such as ‘Ballroom Blitz’ (1973) were a million miles from university fine arts courses, more like council-estate panto. (And Elton John was the love child of Russ Conway and Mrs Mills in Edna Everage’s specs.)

All this was difficult for Roxy to negotiate; commercially, short-term, it was wonderful to cross over from their older, cleverer, smaller, cultish core market into a bigger, younger, working-class, national one. (And Roxy, as it turned out, went down a storm in those big Northern industrial venues.) But with an eye to credibility and album sales they had forever to keep the clever subtexts running with high-end interviews and constant change. The essence of an end-of-the-pier act like Slade was that you got more of the same. The Postmodern essence of Roxy – and of Bowie, though the comparisons are uncomfortable – was constant aesthetic reinvention. Their core markets were always looking for A Sign. You could argue that Roxy – never a world stadium act, never a commercial success at the Bowie level – were nonetheless crucial in defining so much of the attitude and aesthetic that are mainstream Postmodern UK. And you could go on to argue that their particular kind of dandyism was socially conservative and even contributed to the Thatcher mood.

You could argue all those things, but Michael Bracewell doesn’t in his book Re-make/Re-model (Art, Pop, Fashion and the Making of Roxy Music). He knows the readers can do that for themselves. He starts from the assumption that Roxy Music’s first album is very important in the great scheme of things, and that his readers know it. Re-make/Re-model is the social and intellectual history of that album. It documents the ideas and milieu behind it in extraordinary detail, with long original interviews with all the key players and their collaborators and influences. We hear a lot about the cross-riffing of grand theory and mass-entertainment behind Pop art. Bracewell traces the links between Richard Hamilton, Newcastle and Reading universities (the only British universities with fine arts degree courses in the 1960s), the Royal College of Art and David Hockney’s Ladbroke Grove gay art and fashion world – all related influences on Ferry. And then there’s that direct line back to Marcel Duchamp and the idea that art is an attitude and a way of working rather than a practice and a product – meaning, of course, that Pop music, infused with the right approach, absolutely could be art. The links couldn’t be clearer: Hamilton, Duchamp’s British scholar/curator/apologist, taught at Newcastle in the 1960s (he reconstructed The Bride Stripped Bare... there), and Ferry studied there. 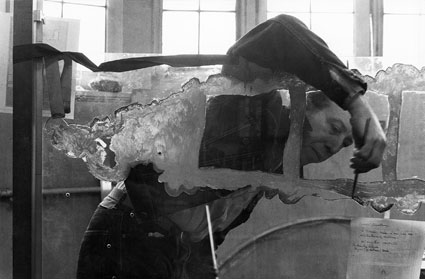 Richard Hamilton working on his reconstruction of Marcel Duchamp’s The Bride Stripped Bare By Her Bachelors, Even (1915–23), Newcastle 1965

You get basic biographies of the key characters – Ferry, Eno and Andy Mackay are all upwardly mobile products of a vanished respectable unionized working-class – but absolutely no sauce. Don’t expect anything about, say, Jerry Hall and the Mick Jagger thing. Or even much about Ferry’s impending social trajectory (though he talks tellingly about his natural attraction to élites). Nor that much about the social life of that Notting Hill gay world, though there’s plenty about the idea of androgyny and its contribution to the art of posing, and masses about menswear and the influence of those pioneer provincial shops on Ferry. (He worked as a Saturday boy in a Newcastle tailors with Savile Row pretensions and a great prewar archive; it must have influenced his mid-1970s’ M. Classique period).

'Do the Strand' on The Old Grey Whistle Test

I’m putting off declaring an interest here. I’ve always believed, like Bracewell, that Roxy were extraordinarily important. So defining the influences and milieu that shaped them – and getting it right – was worth doing and ultimately a better approach than a celebratory coffee-table book. And I have to say I’m quoted – particularly a piece I did about the fashionable post-art-school London world back in 1976 – and acknowledged very flatteringly. I’ve wanted somebody to write this book because I always wanted to know the roots of Roxyism, and after his brilliant England is Mine (1997) it was obvious it was the job Bracewell was born to do. By avoiding the prurient and the pictorial he’s limited the initial readership; but, I’d reckon, by putting in the hours he’s probably ensured the book’s long-haul international status, because now there’s a whole new cultish, virtual-arty world of the similarly afflicted from Barcelona to Beijing.

Re-make/Re-model by Michael Bracewell is published by Faber & Faber (London 2007).

Peter York is an author, columnist and broadcaster based in London. His books include Style Wars (1980), The Official Sloane Ranger Handbook – co-authored with Ann Barr (1982), Modern Times (1984), Peter York’s Eighties (1995), which, co-authored with Charles Jennings, was both a book and a BBC television series, and Dictators’ Homes (2005). His most recent book is Cooler, Faster, More Expensive: The Return of the Sloane Ranger (2007), which he co-wrote with Olivia Stewart-Liberty.

Taken over the course of a decade and published in 2001, the artist's intimate depictions of hijra life speak to trans communities in India today