The opening of the Elizabeth A. Sackler Center for Feminist Art is a landmark event – but without an acquisition programme, does it risk becoming simply another Women’s Studies department? 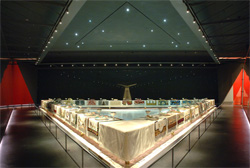 Five or so years ago I was asked to write an essay on the work of Tracey Emin for Parkett. It was agreed that my contribution would involve a feminist reading of the artist’s work. Pleased at the opportunity to situate Emin historically, I centred my piece on the following rhetorical question: what if Emin had been born a decade prior, in the seaside town of Venice, California, rather than Margate, England? What if she had escaped to Los Angeles rather than London, and still ended up in art college at the age of 20, but this time at CalArts rather than Maidstone?

In 1971 Emin would have stumbled into the short-lived but ground-breaking experiment known as the Feminist Art Program – an autonomous, all-female course that met off-campus, run by the artists Judy Chicago and Miriam Schapiro. There she would have found 21 like-minded young women who came from assorted working- and middle-class backgrounds; young women who had survived equally traumatic domestic, educational and sexual experiences and, like Emin, were able to access some of this painful, difficult material and convert it into emotionally raw art objects, installations and performances.

As it turned out, Emin rejected my piece, on the grounds that she was not a feminist and did not wish to be identified with Feminism. At all. This lesson was a bitter one. It was painful to learn that women artists of more or less my own generation – even well-known ones, with nothing to lose – were loath to call themselves feminists. At the start of the 21st century, the word ‘feminist’ had somehow become taboo.

Everyone agrees that the opening of the Elizabeth A. Sackler Center for Feminist Art at the Brooklyn Museum is a landmark event. If ‘feminist art’ is generally understood to be an art of protest, rooted in the gendered critique of social, political and domestic institutions, then everyone should also agree that this art has been misunderstood, attacked and otherwise distorted over the last 35 years. Through cultural patronage the Center seeks to rectify this and to restore dignity to this diverse set of visual practices, setting the stage for the revaluing of women’s contributions to history both ancient and modern.

At 8,300 square feet, the Center encompasses a gallery devoted to Judy Chicago’s The Dinner Party (1974–9), a biographical gallery to present exhibitions highlighting the women represented in The Dinner Party (spanning ancient to modern), a study area, a space for lectures and public programmes, a gallery for ‘the regular exhibition of feminist art’, and a curator: the art historian Maura Reilly. But something is missing. Where is its collection?

Just as Sigmund Freud surmised, this lack is a permanent void in Brooklyn, manifesting itself in the museum’s corpus – the empty space between its legs, so to speak. It stands to reason that the presence of the Sackler Center should inaugurate the Brooklyn Museum’s commitment to the collection and preservation of feminist art; and it seems to me that the best way to speak for this art is through the objects themselves. The filling of that void ought to be a front-and-centre objective. Without an active acquisition programme the Sackler Center risks becoming something akin to a Women’s Studies department that colonizes the other museum departments, as in the inaugural exhibition, ‘Pharaohs, Queens, and Goddesses’, which takes as its premise women’s contributions to ancient Egyptian art. While resourceful and pleasingly revisionist, it belongs in the Egyptian wing, not in a space for feminist art. Egyptian art can never be feminist. Neither can Pre-Columbian art, Colonial Mexican art, ancient Roman, Chinese or Oceanic art. Feminism is not a continuum. It did not originate in 2000 BC; it is a historically determined moment bound to Western European and Anglophone cultures, corresponding roughly to the dates 1968 to 1983, depending on the country and context and who’s counting. To my mind, anything prior is ‘proto-’; anything after is ‘post-’. (Obviously arguments can be made for a few years in either direction, as can similar arguments for seminal, liminal figures such as Eva Hesse, Lygia Clark and Francesca Woodman.)

That is not to say there are not now and will not continue to be post-feminist movements elsewhere – which is what Reilly and Linda Nochlin will seek to prove in their ‘Global Feminisms’ exhibition (which opens on March 23). Nor is this to negate women’s aesthetic contributions throughout history, which, as Chicago’s homage points out, have been grossly neglected and deserve serious scholarly reconsideration. However, the 1970s were a special moment fraught with intensive political activity, when there was a social and political framework for the term ‘feminist’, when there were national initiatives, protests, movements and agendas with limited international reciprocities, and when there was pride in calling yourself a ‘feminist’, versus the contemporary declaration: the wearing of a mini T-shirt emblazed with the logo ‘Bitch’ (or ‘Slut’ or ‘Princess’) in pink. Yes, it has come to this.

The Sackler Center is a fantastic occasion for the true patronage of a vastly uncollected era. Elizabeth Sackler has the opportunity to become the Virginia Dwan of feminist art. Or, given the family history (read: the Sackler galleries at Harvard and the Smithsonian), perhaps more of a Peggy Guggenheim. Maybe Tracey Emin (or Lisa Yuskavage or Elizabeth Peyton or Mariko Mori) will surprise me and agree to be in a group show at the Sackler Center for Feminist Art. If they were in the permanent collection, they wouldn’t have a choice. But given the option, I suspect it will probably be artists of lesser stature. Gender is a biological fact, but it is also a social construction. Bind an artist to gender only, and she is bound to be unhappy.

Jenni Sorkin is a PhD candidate in the History of Art at Yale University. From
2002–4, she was Research and Project Coordinator for ‘WACK! Art and the
Feminist Revolution’ at The Museum of Contemporary Art, Los Angeles.