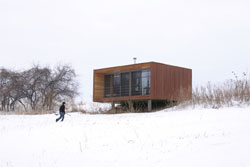 ‘Some Assembly Required’ addressed the cottage end of a vast construction industry predicated on the concept that structures can be mass-produced and places factory-built. High-end contemporary prefabricated housing has enjoyed a renewed buzz of late, and the exhibition – showcasing eight young architectural firms across the country and their experimental prototypes or actual completed dwellings – had the infectious, boosterish enthusiasm of MoMA’s early ‘good design’ shows, whose missionary zeal and trade-show promotional exuberance made converts of museum-goers back when Modernism was still a hard sell. Here all the architects’ websites were highlighted, as were the estimated construction costs of various house models – the first architecture show I can recall where prices were integrated into curatorial wall panels – and nuts-and-bolts talk of the market-place, financing and contractors. On one video screen an eager architect addressed the visitor as a potential client and homebuilder. And why not? The appeal of prefab Modernist houses (and that is what they are, harking back more to the postwar mid-century heyday of the Case Study prototypes of Charles and Ray Eames, Richard Neutra and others than to recent baroquely idiosyncratic trophy house design) is readily apparent. In theory the assembly-line efficiency of prefab architect-designed housing brings down costs and democratizes good, quality design. That was the goal of upstart companies like Techbuilt and National Homes in the late 1940s and 1950s, who saw the huge postwar housing shortage and the new wartime technologies for mass-producing, delivering and assembling functional shelters with the same industrial efficiency as bombers and battleships, as an opportunity for finally making Modernist architecture and its ideals affordable and desirable to the general public.

Best-case examples of this jump-started legacy include the weeHouse (2003), designed by Minnesota-based Alchemy Architects as a Minimalist prairie log cabin. An elegant one-room wooden cubby with floor-to-ceiling windows, it’s a purely functional enclosure stripped to the barest Judd-box essentials, built to be strong and inexpensive (the cheapest design here, the basic unit starts at about $54,000). Like a really big dishwasher, it is delivered to the site on a flatbed truck and simply hooked up to local utilities and plumbing, ready to inhabit. It is what’s known as a ‘fast-build’, fully assembled at the factory before it hits the road.

While some prefabs follow the weeHouse model of forklift modularity, others echo the old Sears, Roebuck, & Co. catalogue kit home formula (as in Lazor Office’s panel-based FlatPak House, 2004, or Rocio Romero’s LV Kit Home, 2005, which arrives on-site like a $60,000 jigsaw puzzle with a sheaf of instructions for the enterprising owners to decipher). Still others are a mixture of both module and kit, as in Michelle Kaufmann’s eco-oriented Breezehouse (2005), built as an experimental earth-friendly prefab prototype for Sunset magazine in suburban San Francisco. With various aspects of production outsourced to different specialized fabricators, the precision-cut components are then factory-assembled and brought to the site as a partially completed kit. (‘Buttoning-up’ house to site takes a short month.) With energy-efficient breezeways for regulating interior temperatures, water-catchment systems, ‘solar-ready’ roofs, commonsensical window orientations that discourage using artificial light, the whole production process is streamlined to reduce construction waste and emphasize cost-efficiency, while still allowing a limited degree of customization.

While the exhibition refers to the ‘renaissance’ and ‘resurgence’ of prefabricated architecture, the truth is that prefab never went away. (It is everywhere, all around us.) The problem is that the idealism once briefly associated with it did. In the end, it wasn’t the Case Study houses but the crass factory-produced subdivision with its ‘double-wide’ cookie-cutter tract homes that became the standard model (with often sub-standard building practices). The resulting stigma attached to ‘prefabrication’, a synonym for soul-crushing homogeneity, has been hard to shake in the US. At the same time, while many prototypes on view here promise that prefab’s mid-century ideals can be retooled with newer efficient technologies and a deeper understanding of ecological issues, there is reason to be concerned that not all ‘contemporary’ prefab is created equal. A rising tide of affluence, or at least inflated housing prices, floats all boats, including factory-produced ones. Few of the houses on view address issues of sustainability or are as inexpensive as they might seem; these dwellings are not priced for G.I.s returning from the war with hopes of raising a family on a modest income. They are marketed mainly for a design-conscious, Dwell magazine-reading middle class.

Some architects who have separate high-end practices seem to be getting into the current prefab arena to mop up clients they might otherwise miss. Lifestyle and taste, not ideology, seem the driving factors. But if this show were a design competition, the winners might be the weeHouse and Breezehouse. Modestly scaled, resting lightly on the land, affordable, eco-ethically attuned, produced with a minimum of ancillary waste: they are the real inheritors of the Case Study experiments; and they are the ones to watch.