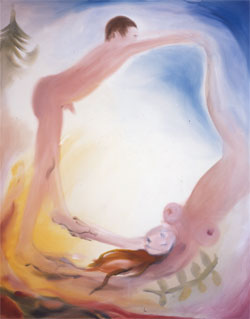 Which weighs more: a pound of feathers or a pound of lead? The 187 big, breezy paintings that Sophie von Hellermann has produced in the last dozen years (as collated in her exhaustive recent catalogue Judgement Day, 2006) are a pound of feathers all right: determinedly wispy, anecdotal, pastel-toned, half-finished. In the main they’re clearly designed to raise the hackles of anyone who associates painting with big-theme gravitas and a latently masculine mastery. Considered as a German painter, Von Hellermann might easily be characterized as the anti-Anselm Kiefer. Having oxygenated the medium-mocking lineage of Sigmar Polke and Albert Oehlen with Karen Kilimnik’s faux-dumb girlishness, however, in recent years she’s increasingly seemed no less of a strategy-milker.

She paints fast, in washy acrylics on unprimed cotton. Wet-in-wet often equals hit-and-miss: Von Hellermann has some facility, but mostly for colour, and it takes extraordinary technical chops to guide paint into effective figuration when it hits water. In this show (also entitled ‘Judgement Day’) the majority of the surfaces are inert, or at least flooded out of focus. When a character pops up that’s actually got a heartbeat – the querulous oval-headed woman with black pinprick eyes in the courtroom scene Mild Judgement (2006), for instance – it feels like an event, gold glinting in mud, and also like luck. ‘So what?’, Von Hellermann might say. By current standards of what constitutes serious painting, she seems to want her work to fail. Beyond pure provocation, however, she also seemingly desires that her imagery slip, slide and dissolve, thereby analogising the way a person’s identity might mutate when pressured by aspirational images of others.

Previously it was DJ culture or cinematic icons from Catherine Deneuve to David Niven or trout-lipped rock stars or (as in Leading Lady, her memorable 2001 painting of a crazy-eyed blonde radiating dangerous discomposure) gender clichés that did the pressuring. Lately, to judge from this show’s appellation and titles such as Untitled (The Ten Commandments, 2005), it’s Judaeo-Christianity. But the title of this show could refer also to a kind of self-judgement, since it shows an artist at some kind of crossroads. There are paintings of recidivistic, misbehaving, flaxen-maned women such as Cell Division (2006), whose imprisoned floating figure smears pink varnish in a stripe across her fingers rather than applying it to her nails. There are cheekily insubstantial excursions into mixed emotions, such as Cloud Cuckooland (2006), wherein a small young couple stride hand in hand across a pale yellow plain while a huge translucent cockerel runs past them and a host of damned souls swirl around the picture’s lower border. There are Edenic vignettes: Tugend ist, wenn keiner Kommt (It's a Virtue if Nobody Cares, 2005) a nude male holding a similarly unabashed, balloon-breasted girl by her feet, and she holding his to form a swirling loop of virtuousness. Making big themes small, flirting with bathos: this is essentially the Von Hellermann we’ve come to know.

Another Von Hellermann is emerging, however. Speaking of her later, looser paintings, she said recently that ‘it sometimes looks as if the canvas were carried past the actual events’. This seems true, and while it’s often irritating, there are occasions where it works structurally. In Washing the News (2005) a stylistic shift occurs between the comparatively firm handling of a quartet of figures draping white sheets (newspapers?) across a blue river and the waterway itself, which eddies with half-formed shapes: café tables, wine glasses and heads, one of which seems to sport a cowboy hat. A miniature horse-rider sporting the St George’s cross pushes the painting to insinuate both timeliness (in relation, assumedly, to current Anglo-American misadventures abroad) and a philosophical timelessness, events dissolving in the stream of history.

And then there is Green Earth (2005), in which painterly mist finally comes entirely into its own and Von Hellermann, surprisingly, starts to look like an artist in control of, and with respect for, her adopted craft. At first it’s hard to read material subjects off this smudgy grey ground. But hints accumulate: a fuzzy paintbrush here, pale white rectangles there, a kicked-over wine bottle – it’s an artist’s studio, and in the corner is a suited man and a diaphanous woman. Collectors? Anyway, the disembodied artist is at work, about to attack a canvas with a yellow ground. All is dissolution. The title suggests Eden, or starting afresh. Once again, then, a huge concept is reduced to the level of Von Hellermann messing around, this time making product. But in this context of thoughtful, balancing marks and deftly ashen coloration it feels less like a tease than an admission of the addictive mystery of painting – and simultaneously broaches a language of slips, echoes and ambiguous ghosts that feels both feather-light and weighty. For Von Hellermann, it might just be a way out.