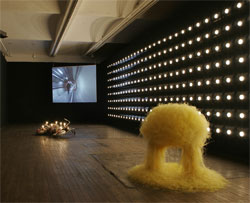 Organized by curator Marc-Olivier Wahler, ‘Space Boomerang’ was something of an oddity here in New York: a group show that teased out clever associations bet-ween individual works that looked better than they might otherwise have done and offered a ‘space nerd’ curatorial narrative that was clear without sacrificing an enticing sense of mysterious ambiguity.
The show takes its title from the distant Boomerang nebula, a galactic backwater 5,000 light years away in what is thought to be the coldest place in the known universe. But in an ironic twist on the truism that ‘what goes around comes around’ the thematic centrepiece of the exhibition was Bruce Peinado’s Untitled, Flat Black California Custom Game Over (2005), an aluminium monolith satirically resembling the one from Stanley Kubrick’s 2001: A Space Odyssey (1968). Mounted on one wall of the dimly lit, portentously black-walled gallery and dented along its bottom edge as if repeatedly kicked, it had the look of a stoical relic of Minimalism in need of running repairs. Despite the evident abuse, it nonetheless retained some of the pseudo-spiritual appeal of its source. In this context Gianni Motti’s video of his 27-kilometre hike down the curving tunnel of a giant particle accelerator (‘Higgs’ à la recherche de l’anti-Motti, 2005) became a real-world corollary to Kubrick’s mod circular space station, laid flat, gravity-bound and buried underground. Filmed four years after the year 2001 came and went, this, apparently, is what the ‘future’ looks like: a drab maintenance tunnel. Motti’s perambulating body, seen from behind, becomes a slow-moving surrogate for a subatomic particle. As he passes from one section of the tunnel to another, the light changes, oscillating slowly from white to red, creating a drawn-out sense of looping time that felt essential to the whole installation.

While Motti’s video evinced a certain humorous ambivalence regarding the disconnect between theoretical physics and human locomotion, other works seemed less optimistic. Near Peinado’s sculpture was Michael Blazy’s Patman 2 (2005), a floor sculpture resembling twin mushroom clouds made from 91 kilos of heaped soy noodles. Also sombre was Mark Handforth’s elegiac Honda (2002), a little moped encrusted with the melted multicoloured wax from five or six candles burning down and continually replenished on its overturned chassis. It added an elegiac, post-apocalyptic, if somewhat sentimental atmosphere to the room, especially next to Motti’s seemingly endless and pointless walk.

One iconic sequence from 2001 includes the famously jarring jump cut from a bone tossed into the air to a spaceship lazing into orbit around the earth. Massive shifts in time and scale intersect in Loris Gréaud’s sound sculpture Tremors Were Forever (2005). Every few minutes a timer-activated set of four ‘micro-vibrators’ – small, palm-sized motors used to keep cement from hardening – would violently rattle the walls and floor on which they were mounted creating a mini-earthquake in one corner of the gallery. The frequency of the vibration was calibrated to mimic the background radiation of the Big Bang, first detected in the 1930s. Gréaud’s actual vibration cracked paint off the walls and lofted dust particles from between the floor beams into the air. If the battered monolith was the thematic zenith of ‘Space Boomerang’, then here was its origin: the noisy drone of an amorphous void, localized and compressed; the birth of the exploded, diffuse universe and the anticipation of its eventual collapsing demise.

Offering majesty and silence where Gréaud approximated the cataclysmic grind of creation was Anna Veronica Janssens’ Freak Star (2004). With a tip of the hat to Anthony McCall, Janssens created a 3-D pentagram of light using five stage-lights and a smoke machine. While there was a tinge of Heavy Metal theatrics to this bit of starshine, the intersecting cones of light carved a provisional supernova from the fog that gave the show its coda of grace and signature sense of weightlessness.