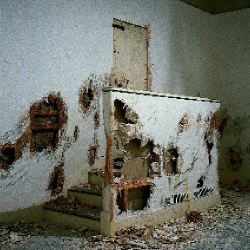 Babylon was dismantled during the Second World War and stored in a warehouse. The blue tiles of the Gate of Ishtar were concealed safely while fire rained down on Berlin and reduced the Museum Island (where Babylon's ceremonial gate can be seen today, reassembled in the rebuilt Pergamon Museum) to a field of pock-marked brickwork.

The German archaeologists who discovered the ruins of ancient Babylon and relocated the legendary Gate of Ishtar, with its glazed walls emblazoned with yellow gryphons, to the heart of Berlin, provided the city with a perfect mythical image. The Whore of Babylon appears as the symbol of Weimar Berlin in Alexander Döblin's novel Berlin Alexanderplatz (1929), and is seen again in a more sinister incarnation in Fassbinder's TV version.

Babylon did exist - it was a city in the Fertile Crescent between the Euphrates and the Tigris - but was swallowed up by the Persian Empire, which, in turn, was crushed by Alexander the Great. However, it is the mythic Babylon that haunts us, and from which we dream of escaping; a city of oppression and cruelty which enslaved the Jews, and which the Book of Revelations identifies with the Whore - handmaiden of the Anti-Christ. It's the city that built the infamous Tower of Babel, a mysterious ceremonial structure in one of the ancient city's courtyards - a replica of which the Pergamon Museum thoughtfully sells in the form of a do-it-yourself cardboard model.

In 1993, Mike Nelson filled out a planning application to the London Borough of Hackney asking for permission to make some structural alterations to a flat in Curtain Road, EC2. In the section of the application form headed 'Description of Development', he specified: 'Alteration to facilitate the construction of five courtyards surrounded by apartments and suites of rooms. On entering from the east, rooms for the palace guard and other members of the household. Centred around the second court, an administrative area. A monumental doorway leads to the third and most important court, Nebuchadnezzar's throne room to the west, the original palace beyond a huge fortified citadel and at the very north-east corner, the "hanging" gardens.'

Planning Application: Babylon (1993) did not lead to the recreation of Babylon in East London, but as Nelson's architectural installations become ever more grandiose you begin to wonder if it is his ultimate intention to build a work of art so vast it consumes the reality around it. In 1994, while at Chelsea School of Art, he laid the foundations for a reconstruction of the city in A Staging of the Reconstruction of the Southern Palace of Babylon (1994). It's the kind of folly that fascinated the writers he loves to quote - Edgar Allan Poe, H. P. Lovecraft, Stanislaw Lem, and Jorge Luis Borges, from whom he took the title of his installation To the Memory of H. P. Lovecraft (1999).

In his story The Library of Babel (1962), Borges imagines a library whose staff - the entire human race, as far as they know - cannot find or conceive any end to the immense library in which they are born and die. Borges fuses book and building, implying an analogy between architecture and fiction. A building is a form of storytelling, a fact acknowledged by Michelangelo in his entrance hall to the Laurentian Library in Florence (c. 1524-26), a sinister vestibule with false, blocked-out, grey windows that resemble dead eyes, watching the visitor climbing the stairs into the scholarly otherworld of the library - the whole building was conceived as a piece of macabre fiction.

In horror literature, the narrative quality of buildings is made literal in the form of the 'haunted house': the house with a story to tell. With To the Memory of H. P. Lovecraft (1999) at the Collective Gallery, Edinburgh, Nelson allowed something terrible to haunt a space that was about to close for renovation. Building false walls that replicated the look of an archetypal modern art gallery, he then unleashed a beast to slash and tear the place apart, its claw marks on the walls apparently traces of some unspeakable horror.

The part of London's East End that is home to Matt's Gallery, the location of Nelson's most recent piece, The Coral Reef (1999-2000), has been torn up and fenced in, and is undergoing a process of being tarted up into a 21st-century park - a green space with its own flyover allowing trees to float above the traffic on the Mile End Road. That any installation could compete with the madness of a city in the throes of such rebuilding is doubtful. At first, the labyrinth of rooms that comprised The Coral Reef (built inside the space over a three month period) seemed almost too Gothic, too calculated, to be disconcerting. It was brilliant theatre, which is not always the best thing you can say about art. Nelson constructed a tangle of perfectly detailed, cinematic rooms/sets with a multitude of different ethnic and cultural decors, complemented by appropriate details that ranged from an American eagle to Muslim publications. There was even a white-walled reception room with a visitors' book, yet this too was a fabrication, a lie. It led into a place with an Islamic calendar on the wall and the wire grill frontage of a minicab company's reception. You might have been in any city on earth, feeling it was the last place on earth you belonged. There was a closed-in shed of a room full of car parts and tyres, an off-white corridor leading to an alcove with an old arcade machine.

Nelson lured the visitor not just into one, but 15 false entrances and fictive vestibules; a suite of lobbies, interstitial spaces and limbo corridors. What you felt, in the depths of this labyrinth, was intense pleasure: the pleasure you feel when watching a film and the narrative kicks in and you no longer have to think about anything else. On leaving, I felt warm inside, insulated by art, as I trudged across the muddy, torn-up park, past a second hand furniture shop.

Several days later, after I knew that Nelson's suite of rooms had been dismantled, I started to imagine myself back there. When I knew it was no longer a 'real' place, it became a site of terrors and cold sweat, whose dim light and rancid colours I could see if I closed my eyes, whose sawn wood and rolling tobacco I could smell. Memories came back to me of distant sounds heard beyond the false walls; of being in a room with sea-blue walls, a dirty mattress, a spoon and tinfoil on the floor, and writing on the wall - a bibliography of references to the occultist Aleister Crowley.

In the 20s, Crowley and his followers founded a religious community at what they called the Abbey of Thelema, a large house in a Sicilian coastal town. Thelema took its name from François Rabelais' Gargantua (1534) and it was dedicated to acting out Crowley's motto, also from Rabelais: 'do as you will'. This building too had murals on the walls, paintings by Crowley of demons and obscene rites. In the 50s, long after it was abandoned and left to rot, it was visited in a spirit of archaeological curiosity (and Thelemite devotion) by the filmmaker Kenneth Anger. He excavated Crowley's Abbey, just like the German archaeologists had excavated Babylon; he uncovered the paintings on the walls, filmed them, photographed them.

Nelson's architecture stays in your mind long after it has ceased to exist in reality, as if it only assumes its authority as a legend, a myth - like Babylon, like Thelema. It's a real place - there are photographs to prove he did build The Coral Reef - and yet it is most pungent as a mental image. When I think back, it must have been like that from the start. The moment you entered, the moment you agreed to the fictional game - signing the visitors' book as if signing a contract - you were agreeing to have an implant in your head. The apparently playful decision to go along with Nelson's Gothic fantasy and walk from room to room was, in fact, an acceptance of an imaginative virus that you would not be able to purge from your memory. Somewhere in your mind, always, would be this place, a place that has no edges.

It's the lack of boundaries that makes the recollection so unnerving. In the depths of The Coral Reef it was impossible - and it has become increasingly so - to identify the shape of the space, as unthinkable as conceiving the shape of London when you are on the Tube. At one point you reached the exit - but it was just a replica of the exit. Of course, it was easy enough to get out, really, but that sense of shapelessness lingers unsettlingly in the mind. It is the image of a city as an underground warren, a system of catacombs; like living deep inside the Tower of Babel and never knowing what it looks like from the outside.

The trick Nelson performs is to fold falsehoods within falsehoods. The visitors' book - was it part of the real or the false world? On signing it, to what did I commit myself? I don't know, except that I feel lost and unsettled, here in the first courtyard, looking up at the blue brick towers, waiting in the hot desert air for the next gate to open.