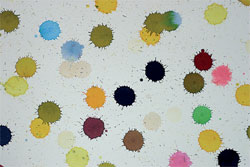 In his memoir The Magic Lantern (1987) the Swedish filmmaker Ingmar Bergman describes being ‘captivated by the problems of light, the gentle, dangerous, dreamlike, living, dead, clear, misty, hot, violent, bare, sudden, dark, spring-like, falling, straight, slanting, sensual, subdued, limited, poisonous, calming, pale light’. His reverie sets just the right tone for Spencer Finch’s new exhibition, entitled ‘As much of noon as I can take between my finite eyes’. Bergman was one of several luminaries gracefully brought to bear in the recent work, which centred on perception and on what we make, physically and metaphorically, of shadow and light.
Bergman figured directly in The Magic Hour, Stockholm, May 8, 2003 (Stalking Ingmar Bergman) (2004), a virtual overture to the show. Finch transformed the full-length window of the gallery’s antechamber with a spectrum of stained-glass panels, their blues, lavenders and pinks recreating in the Manhattan October the dusk outside Bergman’s Stockholm house in late spring. The ambient sounds and vague outlines of people and vehicles passing by on the street outside averted any potentially inflated hocus-pocus effect. These prosaic intrusions shifted the attention instead to the harmless yet rather voyeuristically ridiculous implications of Finch’s stake-out of the Swedish director’s home.
Another work, Abecedary (Nabokov’s Theory of a Coloured Alphabet Applied to Heisenberg’s Uncertainty Principle) (2004), was a 36-panel transcription of Werner Heisenberg’s theorem – letter by letter – into coloured ink droplets on paper. The palette corresponded to Vladimir Nabokov’s notion of ‘coloured hearing’, as detailed in the novelist’s autobiographical Speak Memory (1951), in which he describes experiencing the alphabet as a ‘colour sensation […] produced by the very act of my orally forming a given letter while I imagine its outline’. Working in batches of four, Finch avoided obvious borders, with each group of four panels pinned up adjacent to the next and occupying an entire wall. The initial impression was more polka-dot decorative than cerebrally conceptual, but closer inspection revealed the unexpectedly wide splatter of each ink and watercolour blotch, their shapes not so much daintily placed as detonated. Finch subtly blurs Nabokov’s system with Heisenberg’s theory, elegantly concretizing the crux of the latter’s principle – the im-possibility of determining simultaneously the position and momentum of a particle – while simultaneously abstracting Nabokov’s idea. What clinches the piece is the sheer modesty of its materials, their simplicity an ideal counterpoint to the big ideas Finch is exploring.
The coda for the show, occupying a separate space at the back of the gallery, was Sunlight in an Empty Room (Passing Cloud for Emily Dickinson, Amherst, MA, August 28, 2004) (2004). The piece is composed of azure, purple and grey gel filters that were bunched,