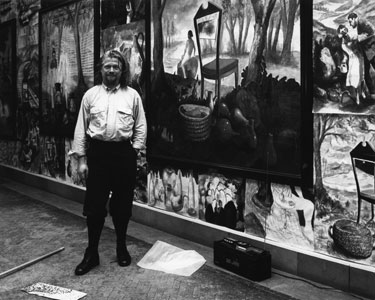 Steven Campbell exemplified two key qualities that had been missing in Scottish art since the turn of the 20th century: ambition and conviction. His rapid rise to success, unprecedented among British artists at the time, was a catalyst for a renaissance in Scottish art that mushroomed in the early 1980s. Following a degree in painting at Glasgow School of Art, he won a Fulbright Scholarship and escaped to New York at precisely the right time. His audacious paintings were quickly snapped up amidst a buoyant market, starting a wave that washed along lumpen Glaswegian painters for much of the decade. Campbell justly loathed being labeled a ‘New Glasgow Boy’, one of the group of bold, neo-Expressionist figurative painters that included Adrian Wisniewski, Peter Howson and Ken Currie; he was The Beatles to their Merseybeat.

Campbell’s works, in their extensive use of visual over-determination, baroque pictorial devices and extravagant purple prose, betrayed a syncretism in sources and media that would become characteristic of the pop culture of the ’80s. He absorbed a gamut of allusions to Modernist art and Postmodernist theory, producing works in oil, stucco, fabric and upholstery that looked like they were devolving into a state of nature. In this, there was an implicit appreciation that painting is about mixing things up, that it behaved strictly according to a logic motivated by his idiosyncratic games and absurd black humour. Noir-esque murder mystery was a prominent leitmotif throughout his oeuvre, a metaphor for the artist’s competition with the criminal for the crown of social transgressor, a melancholic undertone that was mitigated with an equal measure of good humour. The Pinocchio figure was another; simultaneously pessimistic (the artist as a liar) and transcendent (Pinocchio’s only wish is to be authentic). In Campbell’s work, the limits of the frame impose a stultifying cage upon otherwise aspirational characters who vainly seek to puncture their pictorial boundaries and live in real space and real time.

Much of this material was rooted in his experience as a performance artist, one that would transform his approach to painting. Campbell considered painting as a tableau, a set in front of which to perform, a space within which his social actors might adventure. The subject matter of his paintings were the result of a process that involved surmising from mistakes, a form of praxis that was post-Conceptual in its orientation. Campbell consistently presented himself as an implied author within this body of work, which is to say that the trope of the artist as it appears in his work is a phantom of the ‘real’ artist, a fiction that narrates the works in question into being. In his daily life, Campbell acted out the role of the artist with panache. An accomplished dandy, he was known for a flamboyant style last sported when Charles Rennie Mackintosh walked the streets of Glasgow. Often modelling capes, tweeds and carrying a cane Campbell relished posing as a late-19th-century gentleman-artist, a time-traveller out of sorts with the modern world. His alter egos made him an exemplar of what Peter York once termed ‘reactionary chic’ – an outré neo-Romantic sensibility that was perfectly judged for the time (think of the gilded youth of the early ’80s: Haircut 100, Orange Juice, Adam Ant and the pale boys of Merchant Ivory films).

Campbell’s success cast a long shadow over Scottish art. His return from New York to live in the village of Kippen in the mid-’80s signalled that it was, again at last, possible to have an international career as a Scottish artist without having to emigrate. While Scotland’s reputation as a centre for visual art has grown exponentially since, Campbell’s role was downsized for much of the 1990s. Lucy McKenzie and Keith Farquhar’s group show ‘Charisma Presents: It May Be a Year of Thirteen Moons, But it’s Still the Year of Culture’ at Transmission Gallery, Glasgow (2000), rehabilitated a fascination with Campbell’s labyrinthine work among younger artists. This, in turn, encouraged Campbell to regain much of his appetite as an artist and mentor; the ensuing years since saw him return to his prolific best. Prior to his untimely death he was busy on a major solo show at his spiritual home, Glasgow School of Art, an exhibition that may still open as scheduled in 2008.