Searching for a Sure Thing 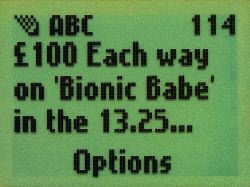 The promise of technology is that of Utopia, but this means different things to different people, not least to odds-crazy punters. One fine afternoon in betting Utopia, they will be able to bet in-flight on their seat-back screen, on their WAP phone in the taxi, at the office on their PC, and on interactive TV at home - all from the same account - and collect their winnings from any cash machine on the street, without ever filling out a betting slip. The best estimates have this state of affairs about three months away, but in the meantime you can already be accosted by a text message from the bookies reminding you that your team is 1-0 down at half time and, dammit, would you care to bet on an equaliser?

WAP (Wireless Application Protocol) phone gambling, which has been available in the UK since the Euro 2000 soccer tournament last summer, is, frankly, a life-altering technology, and some of the best thumb-candy for your phone. As usual in European sport, football is driving its development and the new Premier League season is focusing everyone's mind on soccer betting. 'WAP's good for the moment when people are just walking into the ground and they think "I've just got time to stick on a quick bet"' says Angus Murray of Interfocus, the agency who have developed a WAP strategy for British high-street bookmakers Coral Eurobet PLC.

Eurobet was the first to launch WAP betting in the UK with a service that concentrates on Formula 1, football, and golf. William Hill, Ladbrokes, Littlewoods, and the Irish operators Paddy Power have all followed.

Estimates of the future for the online gambling market diverge wildly, but all of them are jaw-slackeningly impressive - most predict the global online gambling market attaining a value of at least $20 billion by 2002. Currently only 3% of the UK population go to betting shops and less than 0.5% bet online; however, more than 60% are involved in some form of betting activity, including the National Lottery. Closing that gap is what WAP betting is all about. WAP bookmakers want to make punters out of people who currently place unfeasibly complicated long-odds bets on football games to win a lot of money with only a £5 stake. Equally, they want to attract anyone who has ever bought a lottery ticket. At the same time, stock trading sites like Schwab or DLJ Online are beginning to see online bookies as direct competitors.

The difference is that bookies, as anyone who has ever been to Vegas can tell you, know their customers. They know what they bet on the last time around, how many bets they made, how much they are comfortable with losing. In an industry where customer loyalty is elusive, online bookies are going out of their way to sweeten their deals - with your betting profile on record they can offer you favourable odds on the sort of bets you might not normally make.

A number of online betting operators, such as London-based Bluesquare.com, are developing interactive TV betting, and the Australian technology provider Access Gaming Systems estimates that 50% of all online gaming will be transacted via this medium by 2005. But that still leaves a substantial number of punters who want to place a bet in the most discreet way possible - by phone or from their home PC. 'Nobody thinks of answering another person's mobile - the phone is the most personal device that any of us have', claims Danielle Jones, Global Business Development Manager for Mobile phone manufacturers Ericsson, who are working out a horse-racing service for Telia in Sweden. Plenty of people are used to placing bets by phone, but WAP betting is anonymous, gives you up to date prices, and you don't have to talk to a call centre operator when you want to place a bet. 'WAP isn't a discovery tool, but people will pick up their phone to do something. If somebody gives you a tip in a bar you can act on it right there' says Pablo Campillos, director of European Business Development for mLQ, an Australian company that specialises in distributing sports statistics and betting information over mobile networks, and runs WAP betting service out of Melbourne. Campillos suggests that 'betting is the number one e-commerce opportunity, but it's valuable for network operators who currently make four times as much profit from data and SMS calls than they do from voice calls'.

WAP is often dismissed by industry-watchers as a piss-poor gimmick, a holding technology before so-called third generation UMTS phones come along. But anyone who has placed a bet with a WAP phone knows they already run at the right speed for a straightforward fixed odds bet, and, as the technology improves with video capable phones arriving on the scene, the lottery and casino games - roulette and blackjack - will be right there. Currently the biggest hurdle WAP punters in the UK face is coming to terms with decimal odds, more familiar to European gamblers, instead of old-school fractional odds.

In the UK, the rush to launch new WAP betting has slowed, partly because the industry is digesting the possibilities of the SMS-based I-mode service that has become ubiquitous in Japan. However, a serious winter of sports will depth-charge everything to the surface. 'Behind the scenes, no-one's slowing down', says Danielle Jones. She points out that China currently has one of the lowest percentage figures for mobile phone use in the world, yet there are already 50 million phones in the market: 'if you look at Hong Kong alone, the opportunity for developing gambling on mobile devices is almost obscene.'