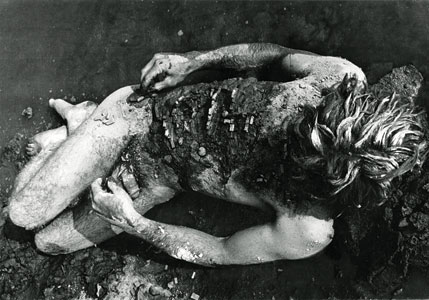 Selected by Steven Claydon, the third in Camden Arts Centre’s occasional series of artist-curated shows took its title, ‘Strange Events Permit Themselves the Luxury of Occurring’, from an aphorism uttered by the fictional detective Charlie Chan in the film The Chinese Ring (1947). Featuring works by 50 or so individuals (including the artist–curator) from the early 20th century to the present day, the exhibition turned, as Claydon wrote in an accompanying pamphlet, on whether ‘an acceptance of the manifold nature of histories and cultural contexts could lead us to better understand the “thinglyness of things” or merely that “strange events permit themselves the luxury of occurring”.’ What’s suggested here is that the past is such an unevenly laid carpet that, whatever efforts we make to smooth it out, we’re bound to trip over it sooner or later, and the best we can hope for from the resultant bump on the head is a few ontological pointers. Most of the time, though, we’ll simply end up seeing a bunch of bright, ultimately ineffable stars.

Despite its eschewal of the customary organizing principles of the museum exhibition (time, place, a dogs-in-art type theme), ‘Strange Events’ was nevertheless shot through with certain emphases, including accretion as something that may hasten physical or epistemological decay. In Bonnie Camplin’s video Cancer (2004) a biologist delivers a lecture on cancer in scholarly tones. Suddenly the image shudders and tears, and his head is reduced to a pair of floating, gloopy eyeballs, bobbing in a waterfall of tiny stick-men that washes down the screen. If we might read these figures as carcinomas, we could do the same with the brick-like, almost architectural sores that have erupted on the skin of the naked man in Charles Simonds’ nearby photograph Landscape <-> Body <-> Dwelling (1970) or his stalactite-like Tower of Babel Dwelling (2007), which skids muddily down the gallery wall. Across the room hung an aluminium plaque by Jenny Holzer bearing the titular words Bodies Lie in the Bright Grass and Some Are Murdered and Some Are Picnicking (1983–5). What seems to be at stake in the grouping of these works is an excess of (cellular) activity, a luxurious excess of life that guides a body’s hands towards its own throat.

As with his practice as an artist, unexpectedly fruitful juxtaposition is Claydon’s curatorial stock-in-trade. Beneath Keith Coventry’s ‘Endangered Species’ (2005), a series of eight 21st-century foxhunting scenes painted in craggy whorls of nicotine-stained white pigment, slumped Lynn Chadwick’s bronze Pair of Sitting Figures III (1973) – a sculpture that has been quoted in a number of Claydon’s own recent works. Here the seated pair become refugees from a Modernist Britain that never quite was, either trampled by a still buoyant- aristocracy or experiencing it (in all their metallic resilience) as a fading dream. Elsewhere a sheet of Eduardo Paolozzi sketches from 1945 of African sculptures of human heads in Oxford’s Pitt Rivers Museum (an institution that organizes its collection by object type) hung near a cabinet containing busts by Alberto Giacometti and Jacob Epstein, as well as an anthropocephalous pot by Hans Coper and a Cycladic arrow- and shovel-head. Modernism’s problematic approach to ‘ethnographic’ art is here visited upon itself, and what results – as in Francis Picabia’s nearby Femme à l’Idole (Woman with Idol, 1940–42), a painting of a be-stockinged glamour girl climbing into a ‘primitive’ sculpture’s dark lap – is something close to cultural S&M – safe words be damned.

If straightforward exercises in compare and contrast were now and then to be found in Claydon’s deft, beautifully installed show (two undated Paolozzi maquettes of Isaac Newton and The Incredible Hulk served, for example, as images of the rationalist ego and the unbridled id), the richest pairings were decidedly counterintuitive. Take that of Mark Leckey’s The March of the Big White Barbarians (2005), a video tour of London’s often absurd public sculptures, and Sidney Nolan’s Kelly, Spring (1956), a painting of the 19th-century Australian bush-ranger and anti-British folk hero Ned Kelly with a shotgun in his hand and a television screen in place of his head. Despite their very different origins, the two works come together to chew on issues of common land, (aesthetic) violence and the shadow that a monumental individual casts. The title of Claydon’s exhibition suggests that such moments of unexpected congruity simply happen (elsewhere in The Chinese Ring Chan states: ‘Man who ride merry-go-round all the time, sooner or later must catch brass ring’), but in truth they are the product of agency – that of an artist–curator who allows things to do their own strange thing.