Martin Westwood creates images and objects that speak of how the language of exchange bleeds into other, more frangible realms of human experience

In 2004 Microsoft UK commissioned a training video featuring the British comedian Ricky Gervais in the role of David Brent, the inept, pompous and gratingly wacky middle-manager who first appeared in the now classic mockumentary-cum-sitcom The Office (2001–3). Not intended for general release – although it has since emerged on YouTube – the video shows Brent visiting the company’s Reading HQ, where he discusses corporate values with one of its employees, played by The Office’s co-writer and co-director Stephen Merchant. Brent, of course, acts according to type, spouting incomprehensible management-speak, casual sexism and empty platitudes, all of which are subtly but insistently contrasted with Microsoft’s workplace culture, which is presented as equitable, bullshit-free and even tolerant of the odd rather toothless gag about its co-founder and chairman, Bill Gates. Ultimately, the success (for Microsoft UK) and the failure (for comedy as an art of resistance) of the video turn on the fact that it appears to ridicule and even to disavow the genre to which it belongs, while at the same time dutifully delivering everything that genre is expected to deliver. The Office, it seems, was not a funny, bleak, occasionally heart-breaking take on how capitalism buckles the soul, but simply a managerial version of the television makeover show What Not to Wear (2001–7).

For several years now the British artist Martin Westwood has been practising what might be best described as a kind of Arte Povera of the spreadsheet, employing stock photographs of idealized executives, company livery and the banal stuff of office fixtures, fittings and supplies to create images and objects that speak of how the language and ideology of exchange bleed into other, more frangible realms of human experience. The corporate world he evokes is not quite contemporary (it has none of the latte-sipping, Dockers-wearing informality ushered in by the dot-com era) but is rather that of the 1980s – the decade in which capitalism established itself as something close to the only economic game in town. This period approach is, I feel, important. While present-day corporate communications, such as Gervais and Merchant’s training video or Google’s slangy, down-home motto ‘Don’t Be Evil’, attempt to obscure their part in big business’ ongoing takeover bid for every aspect of our lives, we have enough historical distance from Westwood’s source material to recognize clearly its lack of intellectual or emotional authenticity. None of this is to say, however, that the artist’s work functions merely to expose already discredited fictions. Rather, it rakes their familiar soil so that strange flowers may bloom. 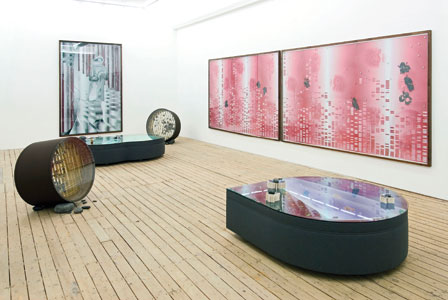 First shown at Project Arts Centre, Dublin, Westwood’s installation fatfinger [ . HAITCH . KAY . EKS .] (2002) comprises a number of standard-size party balloons suspended a few inches above the ground by long strings bound with hole-punches, biro-ends and other office detritus. While the balloons are covered in papier mâché, they are very far from the personalized objects made in a primary school art class. Instead, their stiff paper shells are formed from print-outs of a geometric logo that’s been fed through an office shredder and then carefully reassembled according to a limited series of combinable protocols. To judge from their bottom-heavy forms, they might be eggs laid by the same terrible hen or, given the way they bob about in twos and threes, porky conference delegates taking a coffee break. The floor beneath the balloons is covered with cheap blue carpet squares, into which somebody has tramped several grey wads of chewing gum in an impotent gesture of defiance or disgust. A wheelchair ramp appears on the periphery of the piece – a device that companies install in order to present themselves as good corporate citizens and to broaden their customer base – and a web of threads criss-crosses the space’s upper reaches, creating an office-like ‘false ceiling’ in which, in place of the usual air ducts and electrical wiring, are trapped more balloons of various shapes, sizes and colours. This heterogeneous group may dream of escape, but they seem fated to remain there: on their rubbery bellies is printed a stylized image of a two-headed bird, a creature that pulls in two directions at once, cancelling out its own efforts, rendering it static. Everywhere in the installation, transitory things (celebration, kindergarten creativity, everyday kindnesses, the flickering of a feathered wing) undergo a process of petrification. Westwood’s papier-mâché enveloped balloons will not sag and shrivel, but neither will they expel the precious breath that they contain, returning it to the world.

If fatfinger [ . HAITCH . KAY . EKS .] explores the fossil evidence of the bureaucratization of human life, Westwood’s installation fade held (2005), shown in Tate Britain’s Art Now space, is about smooth transactions, and about the way they smooth us out. Against the gallery’s walls stood two large aluminium panels, onto which were stencilled stock images of a man buying a new car and a woman handing over her credit card to a besuited maître d’. The atmosphere was all calm efficiency, the visual equivalent of the steady hum of a lift in an expensive hotel. From the ceiling dangled another papier-mâché balloon, this time bearing the inverted image of a woman speaking into a headset. Despite her smile, it was hard not to think of her as trapped in a vast, floating teardrop, the surface tension of which was unlikely ever to break. Beneath the balloon, a pie-chart-like spiral staircase – one of several in the room – dropped three steps into the brown-carpeted floor then abruptly stopped, as though in utter refutation of depth. Near the centre of the space stood a low, circular, glass-topped vessel – half-conference table, half-aquarium – the surface of which bore a coaster in the shape of a Venn diagram, and a pen attached to a blond stone by means of a dainty chain. Beneath the glass, papier-mâché rocks choked with seaweedy strands of shredded documents weighed upon a stock photograph of a good-looking, slickly affluent couple – sensitive information, it seems, may pull down those who seek to sink it beneath the waves. While the rocks offered a rough note of danger in this frictionless environment, so too did the heavy steel leaves that littered the ground. As uniform as Apple’s apple, they had been stirred up by a wind of uncanny strength, scattering them hither and thither and flinging them like ninja stars into the bodies of three flat aluminium figures that sat in a corner of the space, closing a deal. They seemed not to notice this assault, or else refused to admit that it had taken place. To recognize nature as anything but a sourcebook for brand names or a backdrop for advertising campaigns is to recognize its disordering power. It is also to recognize that that power is inside us, and that even the smoothest surface can be torn, either from within or without.

While Westwood’s recent work continues to engage with the emptiness of the corporate re-imagining of our species, it also places what seems to me to be a new emphasis on the emancipatory potential of touch. In his solo show in 2007 at The Approach, London, the artist presented three large cylindrical sculptures, Put Cull Purity A, B and C (2007), the interiors of which were fitted with a grid of wooden slats. Between these were packed small, monochrome stock images of executives, managers and administrative staff, all of them caught in what we might read as a gold prospector’s pan, or the mechanism of a garbage disposal unit or an office extractor fan. Whether or not they are victims or survivors of the piece’s titular ‘cull’, these cookie-cutter sales reps and receptionists are all in the end expendable to their employers, giving them a common bond that is only underlined by their jumbled, elbow-bumping proximity. But if these figures touch each other, those in the collage works shown by Westwood at The Approach did not. Leaning against a payment window or passing on a document is the closest they get to physical contact – a corporate artefact always gets in the way. In Churning (2006) a man and a woman prepare a cheque for dispatch – he writing it, she moistening an envelope with her mouth. While the atmosphere is heavy with desire (the bowing curve of the woman’s single false eyelash describes a hidden universe of flesh and fur), they remain apart, their bodies fixed in place by two his ‘n’ hers lines of map pins that swoop and swoon like a sales graph or profit forecasts. Westwood’s point, I suspect, is not that offices have a prophylactic effect, but rather that if we apply market principles to something as splendidly chaotic as sex, or love, we close down one more opportunity to be free.

In a sense Westwood’s recent vitrines also deal with touch, or perhaps its denial. Sticking closely to the formula established by the vessel in fade held, works such as Riverbed (2006), Dead Cat Boundary (2006) and Death Spiral Converted (2007) comprise a round or teardrop-shaped box topped with glass. On top of this plane are placed a small number of objects (elaborate penholders, desk-tidies that resemble Constructivist sculptures, toothpicks sprayed with gold paint) that hover between high-end utensils, objets d’art and executive toys, while beneath them are arrangements of stock photographs of office workers, gluey clumps of shredded stationery and the odd disposable knick-knack, such as an airline eye-mask, that recall rock pools, oyster beds or wet, craggy caverns. The sterility of the things on the transparent surface is contrasted with the fecundity of those beneath it (all those people, all those densely compacted secrets!), and to look at the vitrines is to wish away the glass and to imagine making contact with an underworld that you know is there but cannot touch. This is not the same order of desire as that experienced by the window-shopper. This is not about ownership, but about reaching inside oneself.