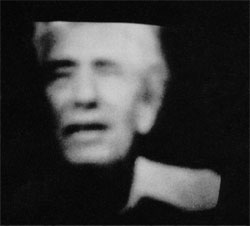 One of the most surprising features of ‘Strange Powers’, the latest show by the perennially entertaining public art organization Creative Time, is its sincerity. When it comes to the supernatural, many would think a nudge and a knowing wink prerequisites to viewing. But, like ‘The Perfect Medium’, the recent exhibition of spirit photography held at the Metropolitan Museum of Art, this show eschews cynicism in favour of a guardedly objective contemplation. ‘We chose pieces that are sincere in their embrace of magical possibility,’ announced the co-curators, Peter Eleey and Laura Hoptman, who placed themselves in the position of the blind leading the blind. ‘Our hope is that the exhibition encourages a moment of belief for visitors – for many, a leap of faith – rather than a suspension of disbelief.’ That the show stumbles in pursuit of this remarkably ambitious goal is hardly surprising.

As it is, there could be no more fitting piece to welcome the viewer than Sophie Calle and Fabio Balducci’s video work Où et Quand (Where and When, 2005), in which Calle, under the instructions of a clairvoyant, attempts to track down her future. In a supernatural detective story of sorts Calle documents her voyages across France under the directions of her sage in Paris. Her meticulously noted experiences gather pace, and the artist – and the viewer – become increasingly sensitized to the coincidences that play out in front of her, with Calle’s deadpan insistence suggesting some greater logic at work behind the scenes.

Jonathan Monk’s The Missing Letters (2006) is also successful in stimulating the germ of belief by walking a similarly fine line between coincidence and the concrete. Monk sent a number of letters to the last known address of the late artist Alighiero Boetti, and waited to see what would happen. One letter was returned by the post office and is displayed next to a series of empty frames of the letters that never came back. We are left asking ourselves what happened to these missing letters. Were they forwarded on to the afterlife or merely thrown away? Monk’s letters to beyond the grave are dead letters in the truest sense, lost somewhere between actuality and possibility.
Less explicit in its empirical intent, Jim Lambie’s tattered Psychedelic Soul Stick (2001), made up of beads, belts and cigarette packets, suggests a tramp mystic – part Joseph Beuys, part Charles Bukowski – wandering between the seen and the unseen. And Eva Rothschild’s Actualisation (1998), which has a New Age crystal facing off against an Old World crystal ball, creates for us a showdown of the shew-stones.

Yet the delicate spell ‘Strange Powers’ casts can be broken in an instant. This occurred most notably when exploration and titillation became confused. The Center for Tactical Magic’s Vital Psigns (2005) invites viewers to project positive and negative thoughts onto two different houseplants to promote or inhibit their growth (a third plant acts as a control). Yet its claims for empirical proof of telepathic communication between man and plant leave one thinking more of end-of-term school projects than of the other-worldly. Similarly Christian Cummings’ Automatic Drawings Brought Forth through the Ouija Board (2006) seems to undermine the show’s emphasis on paranormal integrity, his channelling of the spirits of Barnett Newman and Paul Klee too much like the kind of pat art world joke the show insists it is moving beyond, towards a vision of the transcendent.

What with the preponderance of crystal balls, talismans and calligraphic spells, the show at times appears a little ragged, like a gypsy fortune-teller at a travelling circus. Yet there is something about the show’s inherent theatricality – a common factor of Creative Time’s exhibitions – that allows it to avoid being too implausible, or too po-faced. After all, we are told that the building housing the exhibition itself is haunted, and when listening to the amplified field recordings of Friedrich Jurgenson (presented by Carl Michael von Hausswolff), who discovered he could capture the voices of the dead on his tape-recorder, the haunting, static-ridden sound sculptures seem to infuse the space with ominous possibility.

The stated sincerity with which the exhibition is staged may represent a sea-change in the public’s spiritual convictions, but it also seems to stem from the similarities that can be drawn between the paranormal and Conceptual art. As Eleey eloquently suggests, ‘the exhibition revisits a dynamic at the core of Conceptual practice: our willingness to take artists and artworks at face value, and our ability to find power in ideas whose physical presence can sometimes be scant or nonexistent’. This connection is most powerfully elucidated in James Lee Byars’ The Ghost of James Lee Byars (1969), a pitch-dark room through which the viewer is forced to grope his way. In this black cube gallery of nothing at all, unmediated by the senses, the threat of supernatural contact seems eminently plausible. Here concept and ghost become one. And it’s scary as hell.