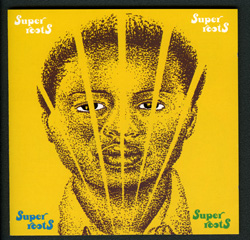 Boredoms, the Japanese Avant-Rock outfit led by Yamatsuka Eye, are a bewilderingly eclectic proposition. Nowhere is this clearer than on the series of EPs released between 1993 and 1999 under the name Super Roots, and reissued this year by the label Very Friendly. The EPs ran alongside the band’s ‘official’ LPs and functioned as experiments, first indications of where the group would next be heading.

The first EP, Super Roots, is a compendium of yelps, chants, wah-wah trumpet and acid guitar. It is an absurdist Rock miscellany, a series of fragments and offcuts, none of them exceeding three minutes in length. Super Roots 3 (2 was a three-inch mini-CD which has not been re-released) is far more directed. It consists of a single track, the 30-minute ‘Hard Trance Away (Karaoke of Cosmos)’. The conceit here was to combine Acid Rock’s expansive wig-outs with Punk’s cropped economy, and ‘Hard Trance Away...’ produces psychedelic effects with the barest of means: a repeated two-chord guitar riff buffeted by crashing cymbals. The locked groove repetition soon attains a kind of agitated stillness, a thrashing stasis.

There was no fourth EP, either for legal reasons or because four is considered to be an unlucky number in Japan. But Super Roots 5 is very much the companion piece to volume three; again it is one track, but this time running to over an hour in length. Devoid of rhythm and riffs, it is as if the band were seeking to reach the same state of tranquil turbulence they had achieved on ‘Hard Trance Away...’, but starting from stillness instead of speed. The quiet first section, reminiscent of parts of Can’s Tago Mago (1971), is like a babbling brook of restive cymbals, effects and distorted vocals. Then Eye shouts ‘GO!!!!’ (an interjection that provides the track with its title), and the group unleash a wave of noise, a vast droning hum roiled by furiously beaten cymbals. This is where oceanic Rock meets power electronics; it is static like TV static, compelling in its chaos, cleansing in its meditative mindlessness, a Rorschach blot of unintelligible sound.

The sixth volume is the most conventionally becalmed of the series: atmospheric rather than awesome, pretty rather than piledriving. Rhythm returns here, and many tracks are little more than grooves or drum tracks decorated with gentle washes of organ and guitar. Super Roots 7 is the set that has everyone reaching for Krautrock comparisons; and with good reason, since Neu! are clearly close to the record’s motorik heart. On the three tracks – all of them radical re-inventions of the Mekons’ ‘Where Were You?’ – Boredoms have refined the standing-still-while-moving effect they auditioned on Super Roots 3. Where the third volume pummels, this – especially on the sumptuous psychedelic Disco-Rock of the 20-minute centrepiece track, ‘Boriginal’ – seduces, shimmies and shimmers.
Super Roots 8 is again three versions of the same song: this time an anime signature tune, ‘Jungle Taitei’. The tracks, based on a soaring, wordless vocal, become progressively more spacey, until all that is left is a barely substantial tissue of reverbed voice and beats: the sound of a band disappearing. Appropriately so, for soon after this Eye would disband the group, returning as the leader of the very different V?redoms.