For the Belgium-themed issue of the London-based magazine Studio International in October 1974, Marcel Broodthaers was commissioned to design a special cover. For it, the artist reproduced a number of round disks from a 19th-century alphabet game, which was designed to wrap around the back of the publication. The result was a kind of rebus that read ‘Fine Arts’, with the ‘A’ indicated by an image of an ass. Based on the success of this project, Studio International’s editor, Peter Townsend, asked Broodthaers to collaborate again. In response, the artist planned what would have been his most freely distributed artist’s book. Entitled SUR L’ ART (On Art), the 32-page booklet was to be inserted in the magazine’s March/April 1975 issue as a two-sided poster, one that the reader could fold into a book. In poster form, the pages are not easily read, and – despite Studio International’s largely English-speaking audience – they are in French. To make the poster into a book the reader had to cut the pages or buy two copies of the magazine and keep one intact.

Broodthaers sent the maquette to Townsend in 1975, along with instructions on how to complete the publication: the editor was asked to choose a list of dead artists from six nations sufficient to fill one page and to make a shadow silhouette of Giovanni Arnolfini from Jan van Eyck’s Portrait of Giovanni Arnolfini (1434). The text was otherwise delivered in its entirety, along with specific directions on five different typefaces and font weights to be used. Broodthaers often worked this way: by providing instructions to typesetters who, with a printer, directly laid out his books and invitation cards for press.

For reasons unknown to Broodthaers, Studio International reproduced the maquette, rather than typesetting the book. The partially illegible pictures of the booklet’s dummy appeared four-to-a-page in the magazine, along with Broodthaers’ instructions. To some subscribers these reproductions must have seemed like a conceptual book project, but this was not the artist’s intention. The publication appeared when Broodthaers had been immersed in preparing six back-to-back solo exhibitions, two of which opened at the same time as the magazine went to press: ‘Invitation pour une exposition bourgeoise’ (Invitation for a Bourgeois Exhibition) at Berlin’s Nationalgalerie (25 February–6 April 1975) and ‘Le Privilege de L’Art 1249–1975’ (The Privilege of Art 1249–1975) at Oxford’s Museum of Modern Art (26 April–1 June 1975). Although he was reportedly upset when he saw the published results, there would not be time to revisit the book project; he died less than a year later.

After a delay of 36 years, it is apt that this booklet should be presented in an international art magazine as the artist intended. The layout of the book was facilitated by Broodthaers’ instructions, by photographs of the original maquette, which is now housed in the Tate archives, and by the invaluable collaboration of Broodthaers’ widow, Maria Gilissen. It is hoped that by finally publishing this long-forgotten book – one of Broodthaers’ last projects – that this artist’s poetic and acerbic commentary on the role of censorship and patronage in the arts will finally reach its audience.

Page 1  This theoretical glance over space printed in an extraordinary number of examples has been copied from works of the same genre.

If this ode SUR L’ART, paying homage to Jean-Baptiste-Louis Gresset and to La Fontaine, can be published by frieze, in the form wished 36 years ago by its author Marcel Broodthaers, it’s due to the research and perspicacity of Cathleen Chaffee, with my thanks. Maria Gilissen Broodthaers

Page 2  To Monsignor the Archbishop of more than one trick up his sleeve.1
To thank him for having awarded me a grant that I gave in its entirety to the publisher.

1 This is a pun on the Archbishop of the city of Tours and the French word for ‘trick’. The dedication seems to refer to the ode ‘À Monseigneur l’Archevêque de Tours’ that Jean-Baptiste-Louis Gresset wrote to his patron, Louis Jacques Chapte de Rastignac in 1730.

AND IF IT WAS THE SEA WHICH
HAD SHIPWRECKED
AND THE CODS WITH THEIR
BRUSHES PAINTING
FOR THE GLORY, OF THE PRINCE.

All would be said on the cover 2 of this booklet. But it is appropriate to add a few pages because one cannot claim to convince the readers by not giving them anything to see but a cover. And if for the painter that would suffice, he must, here, justify the usage of his time.

Censorship assures that the artist uses the legal freedom of expression until the point of suffering.

2 It is worth noting that on three occasions Broodthaers only gave his readers a book’s cover as an artwork: in his edition/cover for the catalogue of the Cologne Art Fair, Musée d'art Moderne à vendre 1970–1971 pour cause de faillite (Museum of Modern Art for Sale, 1970-71, Due to Bankruptcy); the edition/folio C'était comme une semaine de bonté (It Was Like a Week of Kindness, 1974); and the earlier cover he designed for Studio International (1974).

I fabricated instruments
for my use to understand
fashion and finally get dressed in
the world of art as is appropriate.

NO WHITE SHIRT.
NO TIE

What interests me is Ingres
It is not Cezanne.
Cézanne probably would have interested me
too if______ I had not
wanted to know the world.

NO WIG
NO POWDER

3 Shadow silhouette based on the bust by Andrea del Verrocchio of Lorenzo de’ Medici.

4 Giovanni di Nicolao Arnolfini is the likely subject and commissioner of Jan van Eyck’s famous double portrait, and of the solo portrait that gives the outline for the shadow silhouette here.

At Broodthaers’ instructions, the editor has chosen a list of non-living artists from six nations sufficient to fill one page.

5 Louis Forton (1879–1934) was the author and cartoonist of the French comic series ‘Les Pieds Nickelés’ (The Nickel-Plated-Feet Gang). Broodthaers owned an original cover by Forton for a 1931 volume of the comic. This cover, and its legend nouveaux trucs, nouvelles combines is the leitmotif of SUR L’ART as well as of the catalogue Broodthaers designed for his last retrospective a few months later, ‘L’Angélus de Daumier’ at the Centre national d’art contemporain, Paris (1975).

THE ONE WHOSE
HEAD WAS NEIGHBOUR
TO THE SKY

AND WHOSE
FEET
TOUCHED
THE EMPIRE OF
THE DEAD 6

6 This is the last line of La Fontaine’s 1668 fable Le Chêne et le Roseau (The Oak and the Reed), in which an oak, usually taken to symbolize the authority of kings, boasts of his strength to a reed, representing the collective strength of the people. This line referred to the oak’s height, and the depth of its roots.

7 The images on the following pages were taken in the Boule-d’Amont, an area in the Pyrénées-Orientales in southern France, and depict a bush after a fire.

and does not break.8

8 These two lines are derived from earlier passages in the same poem by La Fontaine and summarize its moral: the oak has survived up to the present, but will break if the wind grows strong, unlike the reed, which can survive that which destroys the powerful.

THE BOOK IS SUBJECT TO
PROHIBITION.

9 With this line, Broodthaers seems to cite his own response in a 1974 ‘interview’, a text he then rewrote. He said that he had only once made politically ‘engaged’ art: ‘They were poems, concrete signs of engagement since without compensation. In the visual arts, my only possible engagement is with my adversaries. Architects are in the same position whenever they work for themselves. I try as much as I can to circumscribe the problem by proposing little, all of it indifferent. Space can only lead to paradise.’ Marcel Broodthaers, ‘Dix mille francs de récompense. Une interview d’Irmeline Lebeer’, Marcel Broodthaers: Catalogue/Catalogus, Palais des Beaux-Arts, Brussels, 1974, p.64. Translated as ‘Ten Thousand Francs Reward’ in Buchloh (ed.), Broodthaers: Writings, Interviews, Photographs, 1988

Decorate Duchamp’s urinal with the insignia of the eagle smoking the pipe.

THE MOLE IS NOT SUFFICIENT TO
BLIND.
THE MUSSEL WILL BE HIS ALLY.

10 Broodthaers’ printer’s notes for SUR L’ART specified that the words ‘Palace Script’ were to appear not in the copperplate font of that name, but in Helvetica semi-bold.

NO PHOTOGRAPHY ALLOWED
NO PUBLISHING ALLOWED

Back cover  ON ART

Translation and annotation by Cathleen Chaffee, Horace W. Goldsmith Assistant Curator of Modern and Contemporary Art at the Yale University Art Gallery, who is completing a PhD on the late exhibitions of Marcel Broodthaers. 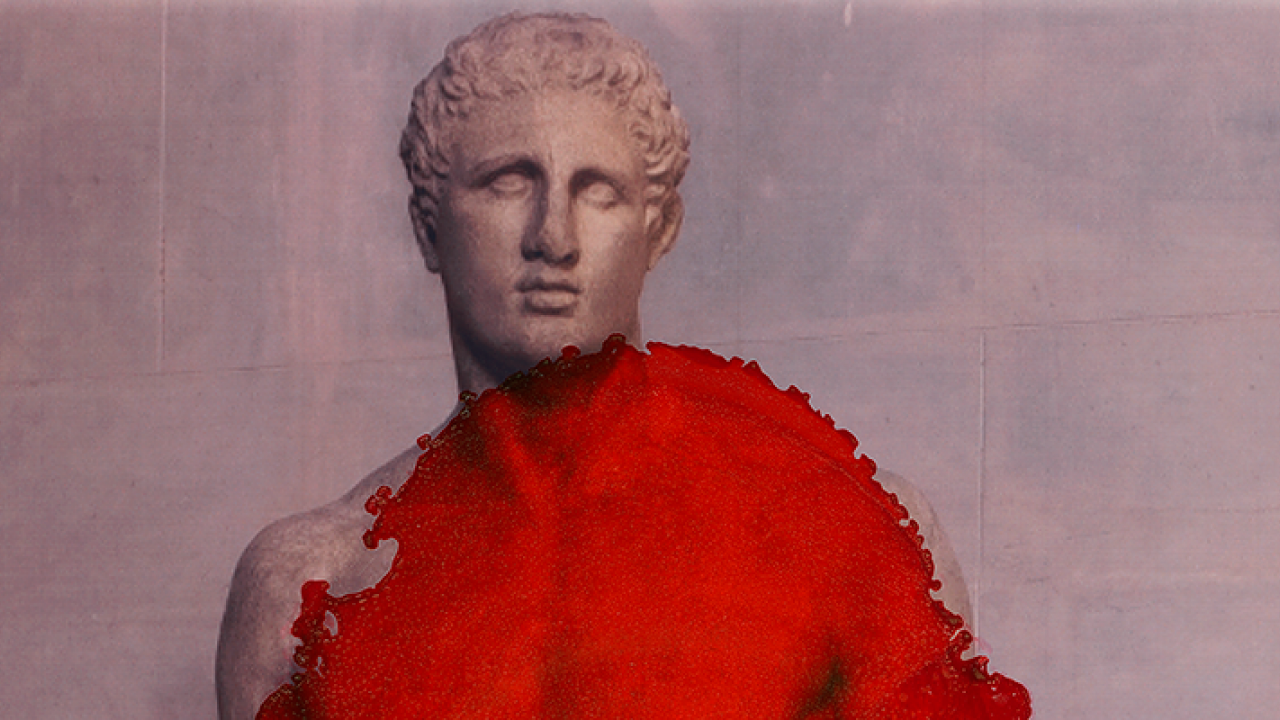 Collaborations
Viviane Sassen: Into the Other World