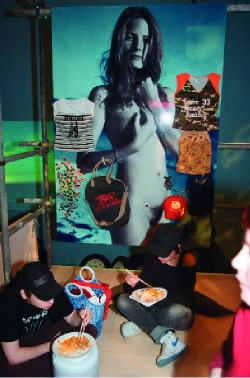 Surasi Kusolwong's work has been showing on the biennale circuit for the past six or seven years. 'No Conclusion (Time is the Answer)', at Rooseum, is his first solo show in Europe and serves as a retrospective of sorts. It consists of four interactive sculptural installations, each of them expanding on Kusolwong's exploration of the viewer's active relationship with the art work and a radical form of cultural tourism. He achieves this through a direct appropriation and referencing of the Western art-historical archive, formats and genres mixed with Eastern myth, social rituals and popular culture in an attempt to develop his own aesthetic and to produce meaning.

Kusolwong is best known for his touring work Market (1999-ongoing), which is describ-ed in the promotional material, fairly accurately, as 'a retail performance with music action'. The work's exact title and number vary according to location and currency - in Malmo it is 10 SEK Market (2004), in Milwaukee it's 1$ Market and in Taipei it's NT $20 Market, and so on - but always applies the same bargain basement principle of everything for sale at a fixed knock-down price. Kusolwong sets out primary-coloured tables supporting a diverse selection of goods bought in Bangkok street markets. The products range from the useful to the useless: washing baskets, soup ladles, footballs, space invader ma-chines; there are a lot of inflatable toys, weird decorative animals, cartoon kids and plastic. The overall effect is both desirable and undesirable, in a multi-coloured, kitschy-Poppy way.

At Rooseum, Kusolwong's market place occupied one end of the exhibition space, and the live performance provided a focus for the opening night. An abstract wallpaper of shiny foil packaging, a video projection of Thai karaoke and a circular canopy of patterned sheets created a backdrop and shelter for the PA and compere module from which Kusolwong initiated the10 SEK Market performance. Dressed in jeans and a T-shirt but sporting an umbrella hat and waving a megaphone, he invited the audience to shop, while reminding them to put their money in the collection box. The elegant Swedish audience broke into a frenzy, encouraged by Kusolwong's whooping and the repetitive karaoke music. Breathless and ecstatic, the crowd looked both delighted and stupid, waving flip-flops and comparing knick-knacks. Kusolwong himself looked like both a de-monic ringmaster and a pathetic clown. The spectacle was hideous, yet it was difficult to avoid the sheepish smiles and acknowledgement of personalities all around you.

The contradictions of 10 SEK Market are obvious: the tension between repulsion and desire, the cynical mimicking and critique of the market, particularly in contrast to the warmth and playfulness of the event itself. Set against a theoretical backdrop of relational aesthetics, there was little in the performance, however, that actually confounded expectation, apart from the disarming way in which the event cut through social reserve. Yet in its galvanizing, chaotic energy the piece was a success and as an actual experience it was not un-pleasant, segueing as it did into drinks, food and a DJ set that resulted in the friendliest of openings, with the audience lolling around the exhibition hall and lounging on Kusolwong's other sculptures.

10 SEK Market is one of four works that together transformed Rooseum's vast space into a theatrical film set. During the opening the installation seemed dramatic and alive, the sculptures serving as support structures for conversation and entertainment. The following day, with only a few people milling about, these interactive sculptures had a lonely, abandoned air emphasizing both the ingratiating nature of their need to be 'played with' and their sheer uselessness and redundancy as objects. Emotional Machine (VW with Fahlström) (2000-4) a hollowed out VW Beetle strung upside down from the ceiling, into which you can climb to lie down and watch a video of a sunset, although popular with visitors, seemed illustrative and sentimental - and induced motion sickness. No Conclusion (I Want to Play the Drums All Day Long) (2004) - a platform structure carrying a mirror ball, a drum set, a lounging area, computers, Dan Flavinesque lights, a Sigmar Polke print and a photograph of Thailand - was physically impressive, but the mix of cultural and art-historical references seemed clumsy and decorative, the mistranslations provoking confusion rather than successfully communicating mistranslation.

Only Electrical Playground (Baby Richard Serra) (2003-4), a hand-painted wooden sculpture resembling (in some distant memory) a monumental Serra ironwork, managed to confound expectation and linguistic analysis through its utter weirdness and self-contained assertion of its right to exist as both a provocative sculpture and a totally pointless 'thing'. It is disappointing that Kusolwong undermined the power of the piece by using the interior of the sculpture as a parking space for electrical toy cars emblazoned with art-historical quotations, as there is something darkly ambitious in the conflating scope of Kusolwong's simple sculptural gesture. There is an aesthetic and political charge to the reduction of Serra's sculpture to a kitsch image of itself that, more than any of the exuberant performances and urging of audience participation, reveals a profoundly chaotic, uncool and genuine element in Kusolwong's (and, in turn, our) relationship to objects and authority, filtering history and fumbling to make sense of the world around us.