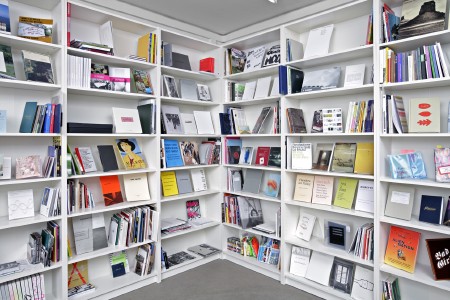 One of the unfortunate ironies of video art is that a medium which originally developed out of democratic desires has become the most tightly controlled of all contemporary art forms. Pictures of paintings are circulated in photographs, but in an era of rapid digital reproduction, gallerists and collectors are wary of allowing videos out of their sight. Simple good business demands maintaining scarcities; master copies are accordingly watched like Fort Knox. As a result, video artists often lack access to the work of their colleagues – a fact which perhaps goes some way to explain the extreme variation in artistic quality which still plagues the medium. E-Flux Video Rental (EVR) aims to address this condition. Organized by Anton Vidokle and Julieta Aranda’s international art organization e-flux, the scheme extends the pair’s interest in alternative models of art circulation by providing a free art video rental service along with a public screening room and a small art book library. Originally started as three travelling caravans the enterprise now incorporates two permanent branches – one in e-flux’s headquarters in Manhattan’s Chinatown, and a second in the back of an East Berlin supermarket. The third, which remains in transit, is currently to be found in Cali, Colombia.

EVR enlists local curators to source video art pieces from gallerists, most of whom, appreciating that more immaterial forms of economy are also at work in the art world, are happy to oblige. A DVD is dispatched, transferred onto video tape, and sent back. In this way, the scheme avoids directly challenging commercial power structures, to instead negotiate an alternative space within them.

The use of obsolete technology is important here. On the one hand, the choice is tactical: an analogue video is less easily copied than something in digital format, and so allows dealers to retain some security. On the other hand, there is also a tacit expression here of the under-notated topic of media ecology. Given forms of technologies nurture particular social patterns; with the advance of new technologies, these may be overrun. The return to the devices and formats of yesterday is thus something like the establishment of reserve parks for endangered species: an action worth undertaking to preserve threatened milieux.

EVR’s Berlin branch organizes regular weekly screenings as a means towards both expanding their archive and introducing a social element into proceedings. The programme on the evening of Thursday 11 December played-off against the general idea of the project in an interesting way. Curated by Florian Wüst and assembled around the theme of electricity, with particular stress on Doug Aitken’s name-making video installation Electric Earth (2000), the five pieces shown each explored the connections between space and the media, belief and technology, information and bodies.

Aitken’s evocative work centred on the breakdancer Ali ‘Giggi’ Johnson, moving eccentrically through a desolate urban landscape. Beginning with shots of Johnson slumped in front of a television with a remote-control in his hand, the work implants a strong suggestion that the subsequent scenes of the film, which feature no other actors besides Johnson himself, might amount to a media-generated hallucination. ‘A lot of times I dance so fast that I become what’s around me,’ says Johnson early on, ‘I absorb that energy […] it’s like I eat it. That’s the only now I get.’

In orbit around Electric Earth were four lesser known efforts. The first of these, Franciszka and Stefan Themerson’s Polish short The Adventure of Good Citizen (1937) initially recalled – to my uncharitable mind – an episode of The Simpsons in which Krusty the Clown loses the rights to The Itchy & Scratchy Show and is forced to screen a baffling Eastern European equivalent in its place. Packed with clusters of extreme close-ups, the Themersons’ plot turns on a collective effort to stave off the apocalypse through the absurdist tactic of rigorously walking backwards. This, from a Polish film made in 1937, was undeniably historically pithy.

In the wake of this madcap extravaganza, Lotte Schreiber’s film quadro (2002), composed of still shots of Modernist architecture conjoined with guitar noise courtesy of architecture-film-soundtrack-specialist Stefan Németh, came off as sterile. By contrast, the location material which comprised Neil Beloufa’s documentary Kempinski (2007) – centred on the technological animism of a group of farmers in Mali – seemed to sprawl quickly beyond the director’s control.

The final video of the night, Maja Borg’s Ottica Zero (2007), was also the most directly relevant to EVR’s own concerns. Fusing together the theories and models of the futurist guru Jacque Fresco (founder of ‘The Venus Project’, c.1975-ongoing) with the possibly fictionalized story of the Italian movie actress Nadya Cazan, who elected one day to become a wandering mystic, the film presented two different approaches – one utopian, the other ascetic – to constructing alternative social models in the contemporary moment. More modest and limited than either of these, EVR’s own line seemed to me more strategic. The next screening, organized around the themes of ‘Home’ and ‘Alone’, is scheduled for Thursday 18 December.