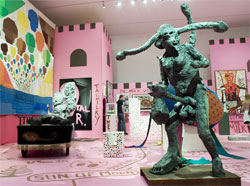 At the opening of Tal R and Jonathan Meese’s joint exhibition ‘Mother’ there was a musician playing folk guitar in one of the towers of the pink castle the artists had constructed out of fabric and wood as the backdrop for their show. The music created a friendly, homely atmosphere. A lovesick Dionysian character, Meese’s Der Protagonist (The Protagonist, 2005), cast in bronze and equipped with female breasts and five oversized penises – two of them coming out of its animal-like head – was guarding the entrance of the 150-square-metre courtyard of the castle. Behind him, in the middle of the room, stood Tal R’s Alexia (2003), a large colourful ball of fabric that looked like an egg with sperms trying to enter it. Piecing the various elements together, it gradually became clear that the pink fortress I was walking through actually symbolized a uterus. This gave an awkward twist to the otherwise comfortable setting, reminiscent of Nikki de Saint Phalle, Jean Tinguely and Per Olof Ultvedt's She at the Moderna Museet, Stockholm, in 1966; a huge sculpture of a woman that could be entered through her vagina.

The dulcet tones of the opening night were in sharp contrast to the experience the following day, when the music had stopped. Returning to the castle, I felt a bit cheated – whereas the previous day I had seen a Gesamtkunstwerk: now the place seemed to have been turned into a mausoleum or a monument to motherhood. The contrast was perhaps too harsh, resulting in a feeling of having seen two different exhibitions. Spread over the floor were sculptures and objects with similar anatomical references – painted egg-like spheres (U, UU and UUU, all by Tal R, 2005) or shapes borrowed by the artists from the children’s book character Moomin (Meese’s Priest Tal and Rabbi Meese, 2005). The works on the castle walls, however, were generally more biographical than biological, with a focus on depicting the artists’ mothers at different periods of their lives. In a room in one of the towers was a gathering of skeletons, tormented dolls and what was – apart from the overall exhibition design – the artists’ only collaborative work made for the show. This was an altered photograph of Sigmund Freud and his mother, their images now replaced by those of Meese and Tal R: Slowmotion Orgy (Freud and Animals) (2005). This was strangely comforting: I felt more at ease walking around a uterus holding Freud’s hand.

In between the works, and written on the walls and the floor, were fragments of sentences in rugged brown brushstrokes: ‘GIVE US YOUR SWEET LITTLE EGG MILK PLEASE’, ‘PINK SPERM’, ‘BEEF VERSUS MILK and bye-bye’, ‘PINK VERSUS BROWN’. Some phrases were joined together by arrows linking the 51 works on show in an odd but intimate way, as if the whole system needed to be read as a rebus mimicking the interpretative codes of analysing dreams espoused by Freud.

Most of the works were a few years old and didn’t have much to do with motherhood at the time they were made. The only criterion for inclusion here seemed to be that each work in the show had to contain some feature that could be vaguely associated with the theme – for example, a circle resembling an egg in a Concretist-style painting (Tal R’s Half, Halff, Halfff, 1998). These loose parameters for selection made me wonder what kind of intentions and aspirations the artists had in mind for the exhibition. Much of the work teetered on the edge of being appealing and lovable on the one hand, and being senselessly backward and ignorant on the other. The ‘Mother, look what I’ve done’ appeal of their work was in danger of fading. And what would have remained would be what in Freudian terms is referred to as ‘the gift of shit’. Still, the artists’ associative and sloppy but charming way of approaching the topic kept me upbeat. It combined all the ingredients of a standard themed show: a bit of theory, something personal and something to please the eye (lacking maybe only an explicit political intent), creating the perfect pastiche of an overused format.

One can also draw a parallel with Meese presenting himself as the old-fashioned genius artist, and making this unhinged outsider figure an integrated part of his work. Contemporary art is not as closely intertwined with theory as it was a decade ago. With many of the forms and modes of address used in the last century having lost their force through repetition, something new has to be introduced. Meese’s way of dusting off this old model and making it play a part in art again seems, for now, to be working.