Tales of the Unexpected

‘On January 18, 2007, a performance with a leopard and 3,000 cappuccino cups took place at the Kunsthalle Basel. The performance was not accessible to the public.’ This was the announcement at the entrance to Paola Pivi’s installation One Cup of Cappuccino, Then I Go (2007); there was more inaccessibility to come. A floor-to-ceiling dividing mesh, plus a seemingly superfluous painted-steel cordon, estranged the viewer from the event’s observable aftermath: a vast regiment of plump white cups, brimming with chocolate-dusted foam and variously tiered on podia or laid out on the dirt-scattered floor. Were it not for the fact that many of these vessels were pitched sideways with not a caffeinated droplet spilt, you’d never have known they were actually painted plastic simulacra: something had prowled amid this careful artificing, upsetting and exposing it. When the perpetrator, a real live leopard borrowed from a German magician, finally appeared – clearly about to unseat a cup with an upraised paw – in a small documentary photograph at the installation’s distant end, it worked on the visible scenario retroactively. One pictured its confused but sleekly superior movements in the mind’s eye. The confirmation of a fabulous rumour, the animal felt several times more real in its absence than in the extravagant illusion on display.

The confirmation of a fabulous rumour, the animal felt several times more real in its absence than in the extravagant illusion on display.

Now the typical rationalizing mindset that demands to know why will toil to recuperate this oblique drama, most probably by rigging up some kind of nature/culture allegory. But Pivi seems fairly uninterested in using art to make direct points. Comprehending its contemporary role as something like an experiential playground and a marshalling of thrumming, colliding forces rather than a codifying system, the Milan-born artist sets intensities in play and then steps back, trusting the cultural cargo her subjects carry to keep meaninglessness at bay. Since Camion (1997), a photograph of a red ten-wheeler truck which, as a penurious student, she’d managed to have tipped on its side by the edge of a sunlit road, Pivi has trafficked in visual knots – combinative interrelations of the hyper-specific and the inexplicable that are rarely even paradoxical because paradoxes are too neat. Her art works power forth on scale and certitude. They roll towards, but never quite reach, the cognitive shore, like the pair of ostriches in a blue motor boat, forever frozen near the rocky rim of the Sicilian island of Alicudi in Untitled (Ostriches) (2003), the less legendary predecessor of the same year’s photograph Untitled (Donkey) – Pivi’s billboard image of an ass easefully becalmed in the Mediterranean, which caused outbreaks of happy brow-furrowing at the 2003 Venice Biennale.

But there I go already, bullying manifestations into behaving like signs, making something smaller and simpler than it is by seeking to articulate it. Ostriches and donkeys are miraculous things. By comparison, creaky symbolic systems, for all they imply about the evolved methods of Homo sapiens for coping with the pressure of the real, are not. In any case, as Pivi often demonstrates, such schemas are almost effortlessly overwhelmed, exposed as puny. Take Untitled (2004). Made from florist’s ribbons, it looks like a strip curtain from a downmarket shop duplicated several thousandfold, then neatly compressed into an obelisk-like block. Visually it’s a deliverer of almost infantile pleasures, its clean minimal format generating clamorous profusions of colour (particularly from a side-on perspective, where the edges of the ribbons create a spectrum of superfine verticals). Its additive format feels logical, yet the obdurate final form leaves more seeming like less, the determined racking-up of examples of this form advertising a purposefulness that can’t be satisfactorily disinterred. One might get a similar impression from Pivi’s 2005 series of wall reliefs ‘Untitled (Pearls)’: coloured pearls strung together in short lengths, assembled in diverse patterns or colour fields, and multi-associative (opulent tentacles, lush shag-pile tufts, hair braids) in effect. There’s an abyssal bliss, such works whisper, in giving up on making lucid excuses for visual phenomena; don’t fight it. 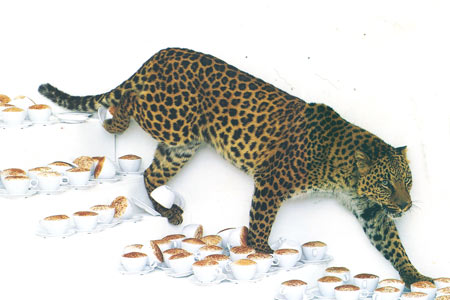 At the same time, however, Pivi’s practice is not limitlessly open-ended and does indeed appear to work on the viewer’s attention with a purpose in mind beyond ludic free-fall. In gingerly approaching this, one might consider the inveterate, one-cup-of-cappuccino-then-I-go wanderlust that is her art’s practical engine, her ceaseless curiosity about earthly places, both for their differences and their correspondences. When Pivi photographed her drifting donkeys and ostriches on Alicudi, it was because she’d recently moved there. (She’s since embarked on a larger project involving the island: a 1:1 photograph of it, making real a flight of fancy nursed by Lewis Carroll and finessed by Jorge Luis Borges. The hugely pixelated final image, requiring 3,742 rolls of photographic paper, will measure 500 by 1818.75 metres.)

After she left Alicudi, Pivi spent time in China – where she was inspired to make the bead pieces, among other projects – and in London. Bored and restless in the latter, in 2005 she became fascinated by a faraway scenario: the Iditarod Trail Sled Dog Race, held annually in Alaska. This, the top prize in the relatively esoteric sport of mushing, involves teams of 16 dogs dragging manned sleds for about 1,150 snowbound miles, beginning in Anchorage on the Bering Strait. Pivi wanted to see it. She picked up a phone, pretended to be a journalist, got press credentials, packed some cameras, got on a plane – and fell for Anchorage. For the moment, she’s living there.

If it’s black ice you’re looking for, you don’t need the Arctic Circle: just try making assumptions about an artist’s work from their biography. One might wish to see Pivi’s freewheeling movement as analogous to her ease with using the entire world as a potential subject for her practice and leave it at that. Nevertheless, she herself has confounded the registers of art and life a little more explicitly. In a recent Artforum article on her ten favourite things she listed the Iditarod at number ten. At number two, meanwhile, was Jared Diamond’s book Guns, Germs and Steel (1998), in which it’s noted that the point where Alaska meets the strait is a historically critical place – it’s where, 12,000 years before pro sled-riders echoed their movements across the ice, the first Eurasian settlers crossed continents from Siberia into the wilderness of America. Diamond’s authoritative volume analyses how environmental conditions (rather than, as one tacitly racist grand theory goes, variably distributed human intelligence) have decisively influenced the relative development of human civilizations. For Pivi, who argues that the book should be distributed in primary schools, it can be summarized as ‘[exploring] the question, Why do whites have most of the power?’

Leaving aside the question of whether there’s a performative colonizing aspect to photographing an island in its entirety, one might plausibly place Pivi’s art within this broad context and ask whether there’s an instrumentalized undertone to her insistence on looking without categorizing devices at the forefront of one’s mind. In 1998, at Milan’s Massimo De Carlo Gallery, and again in 2005, at the Frieze Art Fair, Pivi ‘exhibited’ 100 Chinese, its human congress dressed in identically nondescript grey clothing. The homogenization had an unexpected effect. Causing one to focus on the differences among the mute and motionless participants, it emphasized the human individuality of each – permitting them to be defined as people rather than as envoys from a racial category.

Pivi’s contribution to a previous Frieze Art Fair had been Untitled (Slope) (2003), a large-scale artificial grass slope that visitors were encouraged to roll down. That she’s interested in resurrecting in adults the mental and physical freedoms of early life has lately been confirmed by the repeated occasions (the first was at Galerie Emmanuel Perrotin, Paris, in 2006) on which Pivi has exhibited an ad-hoc petting zoo. Donkeys, sheep, geese, swans and rabbits moved around the gallery space, indifferent to the sophistications of the white cube yet made hyper-visible by it, spotlighted as the wonders of evolution they are. More than this, while revelling in their own specificity, they de-differentiated their audience, reminding them that they are animals too – and members of a global polis that exceeds the human race. It’s perhaps not irrelevant, in this reflexive regard, that all the animals Pivi offered up were white.

As, by default, was the tragicomic hero of her photographic sequence Ffffffffffffffffffffff (2006): an alligator besmeared by its emergence from a lake of whipped cream – white, but out if its element and apparently without power. Yet one must also consider how these funny, silly, sad photographs strategize to short-circuit pat readings. They won’t reduce. One is left with their facticity, and there aren’t words for it, just as in the awestruck acme of early childhood there are no shorthand simplifications of animals, people and objects to sell out their complexity, specificity and commonality. In an ongoing and seemingly worsening context of social divisiveness and intolerance, is it escapism to chase the wordless state that Pivi’s art rehearses – what amounts in adulthood to a willed aphasia, an endless aversion to designation’s shores?

In 2006 Pivi produced a pair of sculptures that brought together chunky little logs she had acquired while travelling in Malawi, cosmopolitan light fittings (green Chinese fairy-lights coiled round one barky length, white Malawian bulbs and sockets lighting up the ends of the other), a scattering of mussel shells from Alaska, and, stuck precariously onto the wood, some high-toned cultural artefacts in the form of miniaturized design-classic chairs by Vitra. Each individual element feels lit from within by uniqueness, each totality comfortable and right yet mulishly resistant to linguistic lassos. If one were hell-bent on a construal, it could be said that they’re models of a world that doesn’t exist and would have to be born first in the mind. And that they’re a measure, in an art dream of cultural syncretism, of the gap between a wish and its fulfilment. Take Me Home, the first work’s title asks. The second is affirmation: Finally I Got Home.