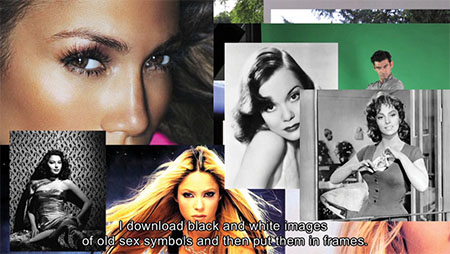 Tamara Kuselman lives in Barcelona, Spain. In 2011, she had a solo exhibition at L’Espai Dos de la Sala Muncunill, Terrassa, Spain; in 2010, at L’Estruch, Sabadell, Spain; and in 2008 at Crimson Gallery Buenos Aires, Argentina. Later this year, Kuselman will have a solo show at Sant Andreu Contemporani, Barcelona, and a performance work will be included in Rita McBride’s exhibition at Museu d’Art Contemporani de Barcelona.

Tamara Kuselman’s four-minute video work, Un Futuro Certero (A Certain Future, 2011), is a document of a year-long process that began in September 2010 when the curators of her solo exhibition held at L’Espai Dos de la Sala Muncunill – commissioned as part of a cycle of solo exhibitions of Barcelona-based artists entitled ‘La Lección de Excéntrica’ (The Eccentric Lecture) – requested a written statement outlining her intentions for the show to take place the following year. Aware that her interests were likely to change she decided to make one thing certain: the content of the exhibition would be conceived entirely by a clairvoyant. Kuselman’s first visit to a fortune-teller in Barcelona in November 2010 proved to be frustrating. She received an email restating the advice she was given: ‘Due to the economic crisis in the Eurozone […] my advice is to postpone all your projects.’

Un Futuro Certero opens with an image of an Osho tarot card; a graphic illustration of a figure falling with arms spread out, eagle like, against a sunset. This is the trust card, dealt to her in January 2011 in Capilla del Monte, Argentina, by a family friend. It was here that she decided to visit another clairvoyant on her return to Barcelona. The video cuts to Kuselman during this second meeting, and her narration, which continues throughout the work, explains: ‘That’s me. Right now I’m listening to the words of a fortune teller […] I am willing to surrender myself to her vision and make the exhibition just as she predicts.’ 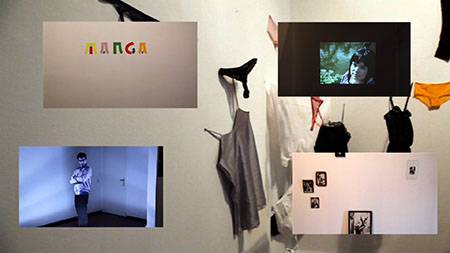 What transpired in the following months, shown in the video, is the execution of a series of production-orientated tasks: co-ordinating photo-shoots and tracking down the content of the exhibition. In August 2011, in the exhibition hall in Terrassa, Kuselman mounted an installation of lingerie hung across the space with photographs she took of girls in a park dressed up as cartoon characters (sometimes referred to as ‘cosplay’); a large print-out of the word ‘Manga’; a life-size portrait of a man with broad shoulders wearing a silver jacket; and framed black and white pictures of old Hollywood movie stars. It was an installation that would mark a significant shift in direction from her performance-based practice. When the show opened in September, however, there remained only the video: a self-reflective document of the project’s own development. Ironically, by introducing a mystical element to the production process Kuselman succeeds in de-mystifying the creative act. Where many contemporary art works achieve this through an emphasis on collaborative and/or context-sensitive production, Kuselman discards authorship only to have it triumphantly affirmed later: in this, Un Futuro Certero is an interesting anomaly.

Explaining her process, Kuselman told me that: ‘There is always an element of risk in my work. I usually find myself in uncomfortable situations and have to resolve it.’ Her words reminded me of Vito Acconci, who once said: ‘Find yourself in a position of crisis and make work from there.’ If risk is a requirement of contemporary art-making, perhaps it shares more in common with speculative economics than many would like to believe. That the clairvoyant’s elimination of the first risk only creates more, which in turn require interpretation and resolution, suggests that it may not be just Un Futuro Certero whose development is the result of decision-making based on a cocktail of mystical, pragmatic and speculative interpretation. It seems we are living simultaneously in a pre-modern world of fate, in a modernizing attempt to control risk and in a Postmodern awareness of creating risks while trying to prevent them.

In the context of ‘La Lección de Excéntrica’ – which aimed to reflect on how the decentralizing of art education (in terms of the proliferation of independent study programmes and institution-led workshops in Barcelona), as well as the more general democratization of knowledge, has affected emerging artists – Kuselman’s exposure of how artistic identity can be developed and formed even in a context in which it is initially excluded, is a confident testament to the role of art as a pedagogical tool for self-transformation and learning. Ultimately, as doubt and faith are shown to produce each other, risk is seen as a product of perception, whose value shifts and changes over time: Un Futuro Certero invites others to take the leap.

For Kuselman’s latest project El Acto (The Actor, 2012), an architect and a dancer spent a week in an industrial space documenting the building in various media. As a result of the time they spent investigating the building’s dimensions, history, utility and use of space, discussions around isolation,
loneliness, mundanity, activity, understanding and communication arose. For Kuselman, there remain decisions to be made and risks to be evaluated with regards to the form and intentions of this project: all will be revealed in September when El Acto will be performed as a musical in an abandoned building.