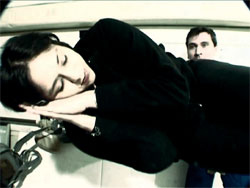 Nobody seems to have liked the Tate Triennial 2006. The British press predictably gave it a drubbing, following the lead of The Guardian’s Adrian Searle, who, in a particularly vituperative attack on the use of institutional jargon in the show’s catalogue, suggested that Swiss curator Beatrix Ruf ‘stuff her hegemonic codes’. Word on the street was that it was arch and fashion-driven. There were conspiratorial mutterings about bias towards certain galleries. (Cabinet Gallery and Herald St represented almost a third of the 36 artists – make of that what you will.) Some liked the idea of a curator from outside the UK having a fresh perspective. Some were disappointed by the result.

The rubric of this survey of current British art was that these artists could all be corralled together under the umbrella of ‘appropriation’ – signalling, in Ruf’s words, a reinvigoration of the ‘recasting of cultural materials’. Yet the degree to which it was evident was so wildly variable as to render the term platitudinous. Here was a typical case of remit versus reality. How do you satisfy both the informed general public and specialized art audiences and keep the integrity of your pedagogical duty intact without bludgeoning the art’s nuances?

I actually like the work of a good deal of the artists included in the Triennial. It’s a partisan selection compared with the more even-handed British Art Show 6 survey currently touring the country, but that’s not such a bad thing. I think Marc Camille Chaimowicz’ influence is hugely important and the acknowledgement of Ian Hamilton Finlay, who recently passed away, is salutary. I also like Rebecca Warren’s rambunctious take on statuary and macho sculpture; so too Oliver Payne and Nick Relph’s observations of Pop cultural flotsam, Lucy McKenzie’s excruciatingly self-conscious reuse of visual styles, the elegant layering of ideas found in Michael Fullerton, Ryan Gander and Cerith Wyn Evans’ work, and Mark Leckey’s film meditations on art, aspiration and desire. Yet the show was like a conversation with one of those name-dropping types who insist on referring to well-known people by their first name. A shortfall occurred between an assumed familiarity with certain prevalent trends in art-making and the paucity of work on display: a hint of neo-Modernism here, a nod to socially engaged practice there, plus a sliver of Pop culture, all tied together with dandyish poise and lightly worn intellectualism. In some cases a single work served to represent an artist’s work: Peter Doig’s Gasthof (2004) or Alan Michael’s Untitled (2005), for example. In other instances this parsimonious approach was unhelpful. Much as I find it dreary identifying where art history books stop and Jonathan Monk’s self-aggrandizingly referential games begin, the inclusion of his Twelve Angry Women (2005) – 12 vintage photographic portraits of women with coloured pins affixed to their ears – did little to illuminate his ideas.
Performance comprised a sizeable part of the exhibition, including Linder’s The Working Class Goes to Paradise (2000–6) and Gerard Byrne’s An Exercise for Two Actors and One Listener (2006). (That no newspaper critics bothered to register their inclusion speaks volumes about performance's status as a form.) These events were staged within a multi-purpose area specially designed by Pablo Bronstein and architect Celine Condorelli, distinct from the main show since, as Catherine Wood points out in the catalogue, they are closer to the concerns of theatre than work ‘associated with the body-centred legacy of performance art’. Yet this contributed to a nagging feeling that the show was oddly empty of physical objects.

A number of pieces pursued a more direct critical engagement with institutionalism. Simon Martin’s film Wednesday Afternoon (2005), in which an unseen narrator describes the difficulty of relating to objects on display in a museum, is forceful in its observational acuity. Enrico David’s use of the Tate’s shop as a display mechanism for a number of his sculptures and prints hinted towards crucially unaddressed questions about the pressures of marketing on exhibition-making (Untitled (Triennial Outlet), 2006). Luke Fowler’s Pilgrimage from Scattered Points (2006) evokes the 1970s’ British Left's attempts to instrumentalize culture for political ends. The Otolith Group’s video Otolith (2003) uses the premise of a message from the distant future to look at the Cold War space race through the prism of personalized post-colonial and feminist critiques of US foreign policy.

Contrasted with Christopher Orr’s prissy figurative paintings – nostalgic 1950s’ imagery retro-fitted with the dubious subtext that they are works of appropriation (market-driven conservatism, more likely) – or Djordje Ozbolt’s cheerfully bawdy but glib Postmodernism-by-numbers canvases, these kinds of work were multifaceted and critical enough to ride the insoluble problems of this kind of survey. Much art in the UK today feels as though it is conflicted by both its own aesthetic travails and its relationship to the systems that support it. (Just look at the miscegenation of hype and flimflam that forms much of this year’s ‘Beck’s Futures’ at the ICA.) Despite itself, the Tate Triennial’s internal contradictions are quite possibly its strength.