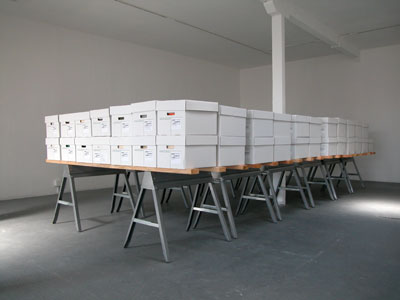 Tercerunquinto (meaning in English something like ‘a third of a fifth’) is the collective project of Mexican artists Julio Castro Carreón, Gabriel Cázares Salas and Rolando Flores Tovar. Formed in 1996, the collective is responsible for dozens of actions designed, in their words, ‘to question the boundaries between private and public space, examining the organized frontiers around the constitution of such definitions’. In the past Tercerunquinto’s projects have taken the form of architectural or infrastructural interventions that aim to create or ‘amplify’ freedoms still present in an administrated and compromised reality. See Ampliación de un area verde (Enlargement of a Green Area, 2004), where the collective extended the grassy patch in a parking area, thereby disrupting the ordered system of cars, or Open Access (2005), installed at The Power Plant in Toronto, where the group negotiated the creation of a second public entrance so that intrepid gallery-goers could circumvent the ticket counter.

When curator María Del Carmen Carrión invited Tercerunquinto for a month-long residency at New Langton Arts, she may have expected the group to produce something along these lines; what happened was somewhat different. Titled New Langton Arts’ Archive For Sale: A Sacrificial Act, their project proposed to put New Langton’s archive – including 30 years of documentation of past exhibitions, recordings of performances, ephemera, press releases, correspondence and even the institution’s economic records – up for sale on the open market. ‘After conducting an informal analysis of the structure of Langton as a non-profit institution,’ the collective writes, ‘acknowledging a history of chronic economic uncertainty – Tercerunquinto has identified Langton’s memory as its most valuable asset.’

For the exhibition Tercerunquinto presented mundane cardboard storage containers stacked atop metal frames at table height, as though dejectedly offering the boxes up for our perusal – although just what fetishistic goodies the archive actually contained was left to the imagination. For an art historian like myself the urge to dig around in the attic of the longest-running non-profit artists’ space in San Francisco was nearly impossible to resist. Fredric Jameson held a residency there in 1981, just after finishing his book The Political Unconscious – was anything left behind? Were there recordings of Factrix, Charlemagne Palestine, Survival Research Laboratories, a video of one of those crazy Tony Labat performances? Some evidence of Jean-Luc Godard, Fashion Moda, Mary Kelly, Winston Tong? My first reaction was: how could they dream of auctioning off this gold mine?

What initially seemed like an act of outrageous vandalism turned out, in its details, to be somewhat responsible. A number of qualifications would apply to the purchase. The archive had to be purchased as a whole – no cherry-picking the most attractive bits. The archive’s unique recordings, on various decaying magnetic media, would require conservation. And the collection must be kept publicly accessible. (None of this kept a couple of big-name collectors from nosing about and making offers.) So does putting New Langton’s history in a sort of rhetorical jeopardy make it the stake in an argument for New Langton’s present. Who cares enough to be angry? Who feels a sense of propriety over the archive, and why?

All of this makes the titular ‘sacrifice’ a little ambiguous, of course – and disappointingly ‘propositional’. Not to mention that an economic exchange is hardly ‘sacrificial’. In fact, exchange generates value, which Tercerunquinto and New Langton’s curators know full well. For non-profit organizations such as New Langton, ‘economic uncertainty’ is inevitable. Founded in the 1970s to capitalize on new forms of federal funding in the USA, these institutions found themselves high and dry when that funding largely dried up around 1990. There are other kinds of uncertainty too: New Langton’s founding purpose was to foster forms of art practice not then supported by museums: performance art, Conceptual art, video, installation, improvised and electronic music, poetry and so on. Now these forms have faded from view or been incorporated into the larger and more established museums, leaving the non-profit just one exhibition space among many. In the present New Langton must do more than support itself – it must figure out why it should survive.
In this light I wonder if New Langton ought not to follow through on the promised ‘sacrifice’ in Tercerunquinto’s title. While my initial reaction was conservationist indignation, I soon found myself attracted to the idea of a New Langton freed from the burden of its institutional past. It’s no coincidence that this ‘sacrificial act’ comes after New Langton’s 30th anniversary in 2005, a year their curators spent mining this very archive for ideas and resources, episodes from the glorious history of non-profit existence … They want to move on. Screw nostalgia. Il faut être absolument moderne.