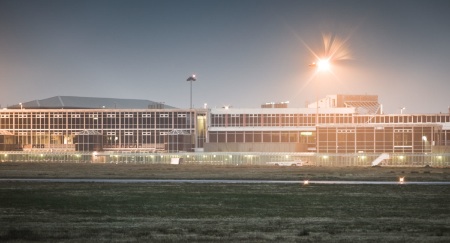 A disused airport terminal at Cork Airport – decommissioned in 2006 in favour of a generic, airy post-Norman Foster shed – was both an apt and over-determined venue for an exhibition, art fair and affiliated symposium. With its check-in desks morosely signalling ‘position closed’ and its commercial precincts stripped to defunct light-boxes that glumly peddled 1990s perfumes, the place embodied eerily (and perhaps a touch too readily) the art world’s obsession with recent dereliction and the seductions of the modern ruin.

Except of course that an Irish airport now is not just any old non-place; the abandoned terminal is a reminder precisely of boom-time hubris, and the nearby airport hotel, with its frantic po-mo kitsch, a relic of amazing vulgarity in the face of looming economic disaster. Take an ORK-bound flight today and you’re still greeted with signage for the city’s tenure as a European City of Culture, way back in the golden age of 2005. ‘Terminal Convention’ seemed to have insinuated itself among several knotty timescales – visitors were citing La Jetée before they’d emerged from the underpass between old and new terminals.

Among the artists who’d been invited to respond to the building’s anachronic presence, Seamus Nolan had conceived the most elegantly scurrilous response, inviting participants to book seats on an inbound budget flight and then not turn up. The gesture would have played havoc with current security strictures, and been a neatly poetic rejoinder to the present status of the air traveller, whose identity is fretted over at the same time as he or she is treated like a nobody. The the project was cancelled, but the unrealized work hovered over the proceedings at ‘Terminal Convention’: a reminder that the tedium of contemporary air travel is still a type of consoling fiction.

Other artists variously engaged the space itself, the ageing evidence of logistics and security rationales, the intimate and collective histories still embodied there. Jacqueline Passmore’s video No Mirror Ever Became Iron Again (2011) investigated the commercial machinery of in-flight catering: not to much a service industry as a bizarre type of global shorthand designed to convey comfortable exoticism, even as we know that ‘international’ cuisine is all made in the same place, mostly by migrant workers. Of the video works on show, Martin Healy’s was the most dolefully attuned to the retro-futurist atmospherics of the place. Last Man (2011) showed a solitary wanderer among the decaying fixtures of the terminal, Healy’s camera pausing among empty departure-gate seating to watch a cloud of dust rise and settle like an impatient spectre. There were several semi-sculptural interventions.

Rosa Barba’s White Museum (2011) trained a massive, throbbing 70mm film projector out a window onto the tarmac, but no image was visible in the bright sunlight. Frédéric Pradeau’s Under Pressure (2011) comprised a ventilator and huge red trailing ducts designed, supposedly, to raise the air pressure in one portion of the building. The effect was imperceptible, but somehow more inspiring than Douglas Gordon’s bruited contribution, a multi-monitor installation that displayed a variety of disparate images – film fragments, disembodied eyes and arms, small-scale reminders of other works of Gordon’s – that felt deflatingly unattached to the resonant space around it.

At the accompanying three-day symposium, John Byrne of Static Gallery and Liverpool School of Art and Design introduced a programme of artists, curators and critics to debate the slightly cryptic question: ‘Airport Art: Is it a Terminal Convention?’ Taken individually, there was much to applaud among these presentations, though they only fleetingly engaged the implications of art-world delegates massed at Gate 5 on dusty airport seats, awaiting what Byrne (a little datedly) insisted on calling the arrival of contemporary art’s ‘Napster moment’. For sure, the accounts given of their curatorial practice by Annie Fletcher of the Van Abbemuseum, Christian Merlhiot and Ange Leccia of Le Pavilion at the Palais de Tokyo and ‘Terminal Convention’ curator Peter Gorschluter (deputy director at MMK in Frankfurt) were all admirably oriented towards nimble, democratic and potentially open-ended visions. Contributions from Charles Esche and Steven ten Thije (both also of the Van Abbe) were sturdier in their assertions (pro and contra) of whether to rid ourselves of the category of ‘artist’ tout court. But that’s also to say that the debate had by this stage gotten very broad-brush indeed.

That was perhaps the problem: much of what was said, as also in the later round-table discussions, could likely have been floated at any institutional gathering anywhere, at any time in the last decade or so. Byrne’s injunction to ‘think ourselves differently’ is now so much a shibboleth of curatorial chatter that it risked being indistinguishable from certain venerable advertising strap-lines, not to mention the blue-sky clichés of the art market itself. Then again, we were all clearly seated at Gate 5 in anticipation of a future we ought to have known was at least delayed, very likely cancelled.