Tomma Abts’ small, intense paintings and drawings treat art as something compellingly unfamiliar: not a language that exists in relation to other art, but to itself 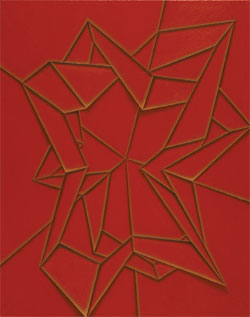 To understand something we must first understand what it is not. A black swan is not a white swan; tomorrow is not today or yesterday; and the sun – despite the bawled protestations of the faithful – is a not a faraway, flame-faced god. To fail to make such distinctions, to fall back instead on the trickster stuff of cosmetic similarity, is to deny the singularity of things. This is dangerous. (And it is why, at the end of the story, the hero must defeat his evil twin.)

A co-ordinate: Tomma Abts’ paintings are not about other paintings. A more specific co-ordinate: Abts’ paintings are not about the type of geometrical, abstract paintings commonly associated with classic Modernism. There are no art-historical quotations at play in her work, no nostalgia for a particular time-trapped movement, or even for the notion of a movement itself. Part of me (the part that allows the writer to outpace the critic) is tempted to liken her paintings to, say, sun-bleached El Lissitzkys found in some long-abandoned summer house, but this would be an act of bad faith. This is art that exists not in terms of other art but in its own stubbornly fought-for right.

It is significant, I think, that Abts has said that her paintings feel to her ‘like objects or things’.1 While images are mobile and even mutable (they may be scaled up or down, moved from one support to another, imprinted on a T-shirt or on the spongey fabric of the brain), objects have an ontological specificity – they are what they are, and nothing else. Uniformly measuring 48 by 38 centimetres, her canvases are slightly larger than a human head, and just big enough to command a presence on a wall. When you look at them (with their looking-glass proportions), they seem, if not to look back, then at least to insist on themselves as things that inhabit the same level of reality as you or me. They are not quite abstract, because that would suggest they possess a species-memory of figuration, a genetic trace of portrait or landscape painting. Rather, they are determinedly non-mimetic. The forms in Abts’ work do not represent other forms (even her repertoire of Euclidean solids are painted freehand, and as such are not truly Euclidean at all) but are instead simply themselves – the only shape, size, texture and colour they could ever be.

If there is an element of anthropomorphism to Abts’ paintings (and I believe there is), it hovers about their edges, making itself known not in the obvious territory of form but rather in the paintings’ atmosphere, in their peculiar sentience. The works’ titles, plucked from a German dictionary of regional first names, only add to the feeling that their thickly pigmented surfaces somehow draw breath. Tado (1999), Eerke (2000), Fale (2003), Taade (2003), Soko (2004): these are murmurs and susurrations, tone poems and glossolalia, strange lullabies in a minor key that provide unfamiliar yet undeniable signs of life. Maybe they’re also siren songs – after all, they are concerned with nothing if not with pulling you in and tangling you up with their fraught, oddly lovely selves.

For Abts, to make a picture is to discover a picture (the viewer’s discoveries come later, when the artist’s work is done). While her small, muted canvases never look anything but intended, she does not plan them in advance. Instead, they are the result of countless on-the-spot choices, of lines made and lines masked, of brushstrokes applied and reapplied, of colours throttled or dimmed. No mark – as her sometimes almost burial mound-like layers of pigment attest – is ever scraped away, and so in a sense no painterly decision she makes is ever rendered redundant or ever entirely forgotten. As with human lives, Abts’ paintings are created through a process of accrual, which perhaps accounts for her works’ paradoxical mixture of openness and hermeticism. After all, only things that keep their secrets skin-deep are this tremulously excited – and this wary – about being touched.

To look at Abts’ paintings is to experience first empirical certainty and then existential doubt. Compositions that appear to obey the rules of logic begin, after a little while, to melt into giddy irrationality, or a plain wrongness that nevertheless feels somehow right. You notice shadows falling where they shouldn’t, planes insisting that they are both foreground and background, and shapes turning themselves inside out. Loert (2005), a painting that might be mistaken for the logo of an Olympiad held in an under-funded Soviet mental hospital, has at least three different light sources and seems at pains to disrupt its own internal harmony through the presence of a number of hesitant, top-heavy curving lines. Similarly, the zingy geometry of Moeder (2005) is transformed into something creepingly organic by Abts’ compost-y palette, something a few bolts of electric blue paint only serve to underscore. In Fewe (2005) two elegantly intertwined angular forms become horribly snarled up in the bottom left corner of the piece. All that’s needed to ‘correct’ the painting is the removal of a single line, but it’s precisely this line that makes its strange heart sing. For Abts there is no subtraction, no erase and rewind. There is only adding this, and that, and that too until her pictures are ready to leave the studio and work their juju on the world – surprising us, refreshing our exhausted perception of tone, mood and space.

Ento (1998) with its soapy pallor, Mennt (2002) with its rumour of shit-smeared ice fields, Noeme (2004) with its maddeningly interrupted ellipse: Abts’ canvases wink at you and then poke you in the eye, as though they know you usually spend your time looking at things that are bigger, brasher, easier and are wondering – affronted yet hopeful – what the hell you’re doing sizing up their awkward angles and dishwater colouration. Perhaps what they really want isn’t for you to rhapsody about their alluring obtuseness or their weird, alien beauty – suitors are always boringly adept at turning peculiarities into precious jewels – but instead to locate their generosity, or even their humour. And Abts’ works are generous (think of how rare it is to encounter contemporary art that asks for nothing more than curiosity and an eye), and they know how to raise a smile. This is especially apparent in the artist’s recent drawings. Take her Untitled #7 (2004), in which a black line makes its way across the paper from left to right, only to be interrupted by a downwards-travelling grey line that appears to extend two curving tendrils and tickle the black line’s underbelly. We might take it as a joke about the way one form disciplines another in ‘abstract’ compositions (grey line: ‘I’m a lover not a fighter … ’) or else about our inability, in the final analysis, to see anything but human interest stories in even the most non-mimetic, non-narrative types of art.

Abts’ work is about not knowing what you’re looking for until you find it, and finding it in the strangest of places. It is about the map being the same thing as the territory, and then the utter repudiation of this claim. It is about treating art not as a language (which is to say, a set of reconfigurable, historically freighted forms) but rather as something that’s always unfamiliar, always terminally new. It is about knowing the difference between one thing and another, and then pointing out their similarities, just for kicks. It is, in the end, about being nothing but its own mesmerizing self.