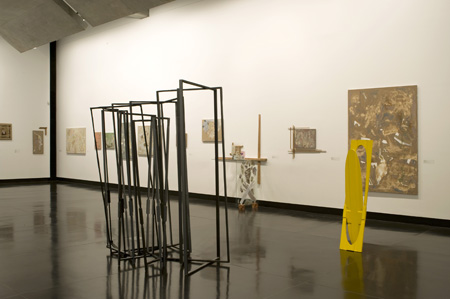 Bala Starr, the curator of ‘There’s No Time’, intended the show to ‘introduce’ the work of Sydney-based artist John Spiteri to a Melbourne audience. Spiteri’s career has been punctuated by moments that should translate into art-world success (a big scholarship, a residency at Goldsmiths College, London, collaborations with Mark Titchner and Goshka Macuga) yet none of this has created much momentum in Australia, so he suffered this ‘introduction’ with good humour.

Spread throughout two rooms, the exhibition featured a selection of Spiteri’s work from the past 20 years, alongside that of local artists Bradd Westmoreland, Mira Gojak and Karl Wiebke. Spiteri’s oil-and-enamel paintings on linen, glass and board, and strange sculptural constructions made of wood off-cuts, painted glass panels, rocks, ceramic and aluminium bricks, were displayed next to a vast floor-to-ceiling wall mural by Westmoreland (Night’s Bright Song, 2010), four luminous acrylic paintings by Wiebke and Gojak’s Everywhere and Nowhere (2005), an intricate wood and steel sculpture.

In the first room, a group of paintings, although diverse in theme and content, shared a sparse and enigmatic approach. Spiteri’s Today, Tonight, (2007) depicts two sarcophagi-like profiles positioned back-to-back and rendered with rudimentary detail. A playful arc of colour, borrowed from Wassily Kandinsky, sweeps below the two profiles, which float unanchored on the raw linen background. The painting draws disparate historical art references together which Spiteri, Marty McFly-like, has re-contextualized to create a muddled, futuristic vision of the past.

Recently, Spiteri has introduced monoprinted Grecian vases and stooped, bulbous figures into his paintings. In Army Dreamers (2010) rough blocks of washed out colour form a pattern over four interlocking canvases like a New Age illustration dulled by decades in the sun. The ridge on the outline of a figure reveals the trace of a printing process, as does the motley surface of the figures left imperfect from the pressure applied to the stencil as it absorbs excess paint with the creation of each new layer. Spiteri’s pleasure in the malleability of paint is obvious here.

Spiteri’s experimentation is echoed, albeit with an antithetical aesthetic, in Wiebke’s paintings and Westmoreland’s mural. In 26-03 White on Grey (2003) Wiebke fastidiously painted one thin line from top to bottom across the canvas, a millimetre at a time, before starting on the horizontal. The mural, Night’s Bright Song, is a carnivalesque wonder – a serpent coiled around a piano breathing a fireball of thatched red heat. Like Wiebke’s paintings it highlights the pleasure of paint; the narrative takes a back seat. It was clear, however, that contextualizing Spiteri’s practice was the curatorial focus here, and thus the work of the other three artists was intended to illuminate Spiteri’s processes and craft. This backfired with Starr’s decision to include Gojak’s wooden and steel construction Everywhere and Nowhere (2005). A study in precision and temporality, the sculpture consists of a wooden door that is deconstructed to circle in on itself like an overgrown slinky. But Gojak’s precision seems to belittle Spiteri’s rudimentary paintings, hacked wooden frames, rocks and raw linen.

Despite Starr’s obvious interest in the formalist elements of Spiteri’s work it’s hard not to wonder what his strange motifs – vases, Balinese dancer hands, laurels, Egyptian masks, thin alien-like figures – actually mean. In 2002 Spiteri produced a series of sparse pop videos (not included in this exhibition) of him performing songs by Billy Idol, Cher and the Pet Shop Boys. Mark Titchner wrote on his blog that: ‘John’s choices for sampling were the kind of songs you don’t remember actually having heard […] but they are the songs, that strangely, you know all of the words for.’ This gets to the heart of the matter. Like his recordings, Spiteri’s paintings and sculptures tap into a liminal space where motifs intertwine and eventually become familiar.