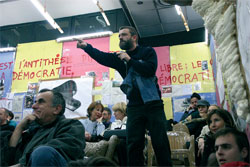 Thomas Hirschhorn’s work often suffers from being shown in the wrong sort of setting. Displayed inside a conventional exhibition space, it can lack vigour, as if somehow sanitized by the surrounding white walls and the presence of gallery assistants. In works such as POLE-SELF (2001), Launderette (2001) and Hotel Democracy (2003) the customary accumulation of cardboard, brown tape, TV monitors and photocopied texts and images appears, on the one hand, as a slightly subversive aesthetic statement and, on the other, as a superficial political commentary. The sheer quantity of references in the form of quotes, images and texts can seem like overkill, and the installations are unable to keep the attention of the fast-moving gallery visitor. As a result, the pieces fail to encourage critical reflection, and without it they can become dogmatic.
When Hirschhorn works off-site, the status of the viewer is even more complicated, especially since he chooses locations that are far removed, geographically and culturally, from the usual circles of art production and consumption. Pieces such as Skulptur Sortier Station (2001), at the Stalingrad metro station in Paris, the Deleuze-Monument (1999), in the suburbs of Avignon, or the Bataille Monument (2002), in a Turkish neighbourhood in Kassel, are, from the outset, confronted with a social reality that doesn’t fully recognize them. The tensions between these two different social and cultural circles reinvigorate the work, but somehow at its own expense: themes get lost in logistics, and the political stance of the artist always verges on the patronizing.
With Swiss-Swiss Democracy Hirschhorn found the ideal venue – and context – for his work: the Centre Culturel Suisse, a three-floor building in the centre of the French capital dedicated to the promotion of his home country’s culture. Commissioned by Pro Helvetia, the Arts Council of Switzerland, Swiss-Swiss Democracy turned the entire centre into a reflection on Swiss democracy in particular, and democracy in general. Hirschhorn wallpapered the whole of the building’s interior with cardboard in neutral colours (pale blue, pale yellow, pale red) and covered it with photocopied and sprayed texts and images that referred, directly or indirectly, to the state and the meaning of democracy. The space, divided into an auditorium, library, bar, theatre and showroom, was a fully functioning cultural centre, in which visitors could work in the reference library, have a coffee, attend conferences (everyday at 4 pm) or see a play (everyday at 7 pm). The nature of the institution and the different activities that Hirschhorn programmed (which included the publication of a daily newspaper) worked as hooks that encouraged a real involvement from the visitors. They were already interested in the cultural product when they came in, and, once inside, they were offered any number of excuses to stay and get involved with whatever was going on.
This alone would not explain the extremely high attendance figures for an exhibition of this kind – 30,705 visitors in eight weeks. After the opening of the show, however, the Swiss cabinet announced it was cutting Pro Helvetia’s budget by 1 million Swiss francs (about £500,000), as a result of what it saw as a misuse of public money. The main focus of the exhibition was a rejection of the typically Swiss style of direct democracy, and, perhaps more importantly, the show included overt attacks on Christoph Blocher, a millionaire industrialist who is also the leader of the populist right-wing SVP (Swiss People’s Party) and, since January 2004, a member of the cabinet. The media coverage of the polemic gave Swiss-Swiss Democracy a resonance that Hirschhorn’s work has never had before.
The artist himself is weary of the interpretation of his work as activism, but adopting a political position, both in relation to the art world and more generally, and disseminating knowledge and fostering debate are integral to it. In Swiss-Swiss Democracy the 50 conferences by philosopher Marcus Steinweg on aspects of the work of Foucault, Nietzsche, Heidegger, Deleuze and others provided a serious theoretical framework for discussion. And the fact that, on this occasion, Hirschhorn exposed himself to criticism by taking a clear position as a political subject seemed at least sincere. But the problems remain, for example in the exhibition poster, where the emblems of the three founding Swiss cantons, Uri, Schwyz and Unterwalden, are reproduced beneath a picture of Abu Ghraib. This juxtaposition has a certain urgency, but it is also a blunt approach to political analysis. The same applies to Guillaume Tell, the play written by Gwenaël Morin for the show, based on Friedrich Schiller’s Wilhelm Tell (1804). The confrontational attitude of the play works well, but as analysis goes, conflating William Tell with Ariel Sharon and George Bush is closer to Michael Moore than Michel Foucault.
Hirschhorn seems to thrive on inconsistencies. Before the show he announced he was not going to exhibit in Switzerland any longer, but he was happy to do so at the Centre Culturel Suisse. More importantly, he doesn’t want to call his art political, but says it is a ‘tool’ that ‘attacks’. It is here that the relevance of the work lies: Hirschhorn shows how fine the line between art and life is, and how, despite that, art can’t help trying to cross it.