The Thrill Of It All

'An artist inventor of undimming good humour, whose work provides the soul with strength to face a not too terrible hereafter.' 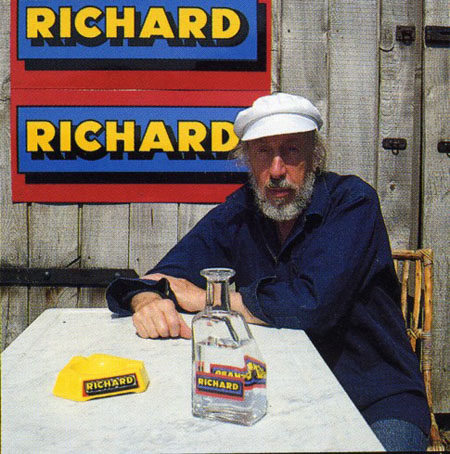 The experience of visiting 'Introspective', Richard Hamilton's extensive and - so he claims - final retrospective, is one of having visited the Science Museum of Pop - or a vision of how such a museum might appear in, say, 50 years time. The impact leaves you giddy for days, concussed by the sensation of having seen the modern world explained - the whole trip, from the vivacity of early Rock and Roll to the frozen, lunar stillness of a world cocooned in technology and media.

Now 81 and working on the second volume of his visual autobiography, Hamilton delivered a definition of Pop art back in 1957 that has yet to be improved on or updated - nothing less than the anatomy of Mass Age culture. His list of Pop's defining adjectives - including 'Transient (short-term solution)', for instance, and 'Expendable (easily forgotten)' - comprise an understanding of both the symptoms and the consequences of an increasingly accelerated culture. He had already pronounced the ambient nature of the total Pop environment in his 'Fun House' installation created for the Independent Group's 1956 exhibition 'This Is Tomorrow' at the Whitechapel Gallery, London - a work that briefs the viewer with Hamilton's vision of the post-1946 consumer age as a kind of unyielding bombardment of slick, gaudy, eroticized signifiers - at once seductive and disruptive.

It still feels as though this is tomorrow. Hamilton's mixed-media work seems the product of a near future age - a post-art age, perhaps - when aesthetics, science, ethnography, satire, requiem, celebration and humanism have been merged without the self-consciousness of dogma into a living, philosophical survey of humankind's relationship with the pleasures and perils of advanced technological consumerism. Hamilton's art describes the tension between our appetite for the compensatory pleasures of modern living - our hunger for glamour, celebrity, and the sheer aesthetic gorgeousness of a refined, product-led culture - and the ways in which our desires are duped by those same obsessions. He both celebrates the fetishized surface of Mass Age culture, and is busily at work within its contradictions - creating an epic narrative of modern experience, the principal theme of which, perhaps, is the relation of technology to desire.

You can find this in such early work as Man, Machine and Motion (1956) - with its almost Kraftwerk-like, 'mensch maschine', interpolation of the machine becoming one with human beings - and in Hamilton's reconstruction and mesmeric typographical interpretation of Marcel Duchamp's The Bride Stripped Bare By Her Bachelors, Even (The Large Glass) (1915-23) - a body of work made between 1966 and 1999. There is in Hamilton's fascination with the taut, almost erotic relationship between a notion of robotics and human physicality - sensuality, even - the foundation of his ultra-modernity as an artist. Like several of the other founding pioneers of Mass Age culture - Marshall McLuhan and Roland Barthes to name just two - he presents an acuity and an aesthetic which seems not only to have anticipated the flamboyance of much postmodernism, but already assigned such thinking to its place in a white, chilled museum of contemporary thought and culture.

In Hamilton's 'Swingeing London 67' series of oil on canvas screenprints (1968-9), for instance, we see the whole parade of celebrity and media - but as it might be reported from the 22nd century; such frozen images of modernity - his 'Richard'-branded objects, Carafe (1978) and Ashtray (1979) share this chilled poise in relation to advertising - establish an aesthetic in Hamilton's art in which we seem to see the present from the future. We are at once immersed in the contemporary experience of the world, and disengaged from its cultural baggage: rock stars and fashion models, hotel lobbies and domestic technology, turd-inhabited advert-style sunsets and pristine computers - they all achieve an eloquence in Hamilton's art which speaks of the contract between our aspirations, empathy, and inner notion of an index of modern signifiers.

But Hamilton is also never still; a great artist in the classical tradition, he endlessly tests and refines his work. Even his work from the 1960s seems more modern - more in tune with tomorrow - than most of today's 'contemporary culture'. (His 1968 design for the sleeve of the so-called White Album by the Beatles remains one of the most aggressively modern artefacts ever produced - not unlike the music it housed.) Underpinned by the joyous intellectualism of his lifelong obsessions with James Joyce and Duchamp (pretty much the architects of Modernism) Hamilton's career to date comprises a body of work created over 55 years that comes across as the diagrams, working models and machines that seem to define both the world we live in now and the one that we may yet live to inhabit.

It's all there: the coming to terms with the supremacy and immediacy of surface; the conversion of the artist into an ambiguous brand; the identification of glamour as perhaps the most determined form of social energy; the usefulness of transgressive or absurd imagery, its potency increased by the meticulous punning on materials and contexts; the adaptation of technology to aesthetic purpose; the role of selective vision in a culture of information anxiety and visual stress; the rhetoric of irony; the seductions of colour and the erotics of form. Above all, Hamilton conjures with the power of absence (that which is hidden, obscured or removed) and the refined capacities of montage - a directive that may have been what led one of his former students, the singer Bryan Ferry, to remark in 1975 about his own conversion of Pop art into art Pop, 'I am, you might say, a collagiste'.

Hamilton's most iconic work - Interior 1 (1964) for instance, or the monolithic twin canvases of The Citizen (1982-3) - become a means of appreciating the force and generosity with which some of his lesser-known pieces become so compelling, and so articulate of the modern world, and how his 'Lobby' paintings from the late 1980s, as much as his 'Fashion Plate (cosmetic study)' series of mixed-media collages from 1969, maintain a creative chemistry that fuses the cold sheen of freshly minted machine parts with sumptuous painterly aesthetics. The dynamo of Hamilton's art appears to be the maintained and controlled collision between the sensual and the mass-produced. As such Hamilton inhabits the pre-history of Postmodernism and convergence culture with an almost uncanny acuity, prophesying time and time again the devices and directions in which visual culture is most likely to proceed.

Ultimately, particularly through his profound relationship with the art and ideas of Duchamp Hamilton emerges as the great philosopher-scientist of the modern age: an artist inventor of undimming good humour, whose work provides the soul with strength to face a not too terrible hereafter.