Abstraction and utilitarianism: two sides of the same curtain 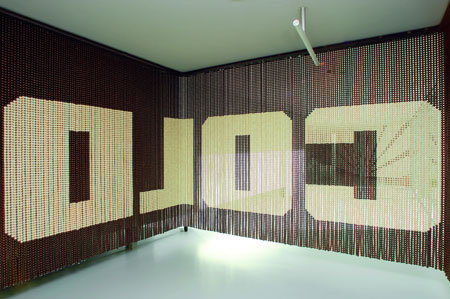 In 2007, as part of his exhibition ‘Formschön’, Tilo Schulz hung a semi-transparent white curtain in the floor-to-ceiling glass façade of the Galerie für Zeitgenössische Kunst in Leipzig. In an instant, the building’s cool contemporary authority took on a domestic sheen, assuming a certain modesty. This slight gesture recalled the way in which the private inhabitants of the glass houses of high Modernism contradicted the bold inside/outside continuum of their environments through the introduction of soft furnishings; privacy being not such a bad thing, after all. It is these awkward grey areas between the public and the private, abstraction and realism, fine art and applied art, or masculine and feminine pursuits, which form the central focus of Schulz’ work.

That Schulz is picking at the seams that knit together these common opposites is not surprising, given that, at the age of 35, he has lived half his life under socialism in the German Democratic Republic, and half under the capitalist system of the Federal Republic of Germany, without ever leaving his home town of Leipzig. He has experienced at closer quarters than most the dissolution of the East/West divide, the concurrent warming up of the cold war and the melting of the iron curtain.

Earlier works addressed these concerns at arm’s length, focusing on the fiction implicit in the archetype of the cowboy, for instance, in works such as ‘White Square and Three Horsemen’ (2001) which incorporated sculptures by 19th-century artist Frederic Remington. In recent works, however, these considerations are more explicit. Dividing structures recur: a curtain whose dark and light wooden beads spell out COLD WAR in block capitals; a curving wall made of translucent glass bricks; a severe screen of concrete slabs bearing the words IRON CURTAIN that, when seen from the back, reveals itself to be a lightweight plywood construction. Schulz’ use of a DIY materialism combined with political sloganeering suggests these dividers to be more screens than barricades, and implies that the dogma that fills political phrases with ideological weight may turn out to be just as flimsy once seen from the other side.

A deft interlacing of domestic aesthetics with abstract forms and direct political references constitutes what Schulz has called his own ‘social formalism’. As well as the net and bead curtains, his ‘Formschön’ exhibition featured potted plants, a room carpeted with newspapers that was empty save for a plywood ironing board and two rough plywood chairs, textured linen wallpaper, and marquetry versions of linear abstraction. A backdrop of nostalgic interior design was established, against which the quotes of Stalinist art theory condemning Formalism as ‘the destruction and subversion of art itself’ (taken from a resolution passed by the Central Committee of the German Socialist Unity Party in 1951) could bring up the other opposition at the heart of this exhibition: the contrasting attitudes of West and East towards abstraction. The lofty ideal of art for art’s sake was referenced by a group of determinedly abstract bent-steel sculptures in the gallery’s first room, while, in one of the final rooms, these bent-steel tubes appeared again; this time as part of a shelving system displaying a collection of ceramics designed by Ursula Fesca. In fact, these were actually the very same steel tubes, passing discretely through the wall from one room to the other. Fine art and utilitarianism are, therefore, proved to be flip sides of the same coin: a matter of taste, maybe, rather than ideological absolutes.

There was a consciously staged feeling to this exhibition that connected to Schulz’ activities during the 1990s, when he cast himself as an ‘art mediator’ rather than as a producer of autonomous art works and engaged in diverse activities such as curating exhibitions of other artists’ work, inviting co-participants to make statements about their work as his own contribution to a group show, or commissioning texts on the future viability of ‘display’ to be fly-posted around a Spanish city. This apparent desire to remove himself from the production process and foreground the work of other artists, or indeed the idea of display itself, has a trickle-down effect in his more recent ‘produced’ work, which appropriates images, texts or forms from other artists or writers, or even – as in the case of Fesca’s ceramics – reduces itself to a means of exhibiting another artist’s work. Display is the methodology here, and points are made through the act of presentation. Both sides of the story are presented in black and white (the show is starkly monochromatic) in order to prove the unsustainability of their duality. A steel tube can be both sculpture and shelf, just as life can continue from one side of the ideological divide to the other.