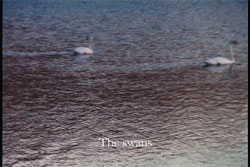 In the lobby of an old hospital on the outskirts of Marseille is a commemorative plaque that, roughly translated, reads: ‘Here the poet Arthur Rimbaud ended his terrestrial journey’. Below it a quote from his Illuminations (1886) adds the coda: ‘I have stretched ropes from steeple to steeple; garlands from window to window; golden chains from star to star, and I dance.’
The mise-en-scène could easily belong to a film by T.J. Wilcox – the marble floors with the late afternoon sunlight spilling across them, the spectral nurses, the plaque with its gold-leaf letters. It’s the type of moment one often experiences in a Wilcox film: a quizzical combination of romantic nostalgia and bemused wonderment at historical minutiae in which a recognition of loss leads to the wistful sense of everything being right in the universe. Like Rimbaud’s poems, shot through with sparkling imagery and a yearning for far-off places, Wilcox’s ‘Garlands’ are often achingly beautiful and suffused with a palpable desire. Availing himself of a Symbolist palette of ambers, crimsons and greys, his images are patinaed but never dull. His camera moves (through a city, across a newspaper clipping) with a flâneur’s gait; leading the eye but aiming at the heart, visual pleasure in Wilcox’s work is always distinctly corporeal.
It’s rare these days to see evidence of the artist’s hand in a medium as cool (in the Marshall McLuhan sense of the term) as film or video, but Wilcox makes a distinctive, tactile impression in his films. Shot in low-tech Super 8, transferred and edited on video and then re-transferred and projected as 16mm, there’s a smudged, worked-over quality that underscores the base celluloid materiality of the film. This extends to the presentation of the films, which are projected onto old-style glass-beaded screens. In the gallery the screens and whirling projectors are as much a part of the viewer’s experience as the flickering storytelling, creating an atmosphere of intimacy that brings to mind a suburban family room of yesteryear, where home movies (and stag films) are shown amid small gatherings of family or friends.
The lovingly homespun feel of Wilcox’s work makes it seductive and immediately appealing. Richly textured, the films are chock-full of images of quaint, hand-crafted objects and melancholy mementoes of childhood innocence. Honeybees, kittens, sunsets, a flock of birds, are all given long and loving inspections. Overshadowed by a rueful black humour, they possess a hobbyist’s attention to detail and reflect an affinity for poignant tales of human aspiration and folly. Over the past eight years Wilcox has populated his narratives with a cast of characters worthy of a History Channel All-Star Game: Marie Antoinette, the Romanovs, Casanova, Marlene Dietrich, the First Emperor of China, Chopin and Ara Trip have all made their way into one film or another. His works run the gamut from the glamorous to the everyday: Garland 5 (2005) recounts the unrelated but somehow parallel biographies of the Countess de Castiglione and the American socialite, paramour and ambassador to France, Pamela Digby Churchill Harriman; Garland 4 (2005), by contrast, lingers over a hometown girl rodeo, an overdecorated Christmas tree and a finger tracing over wet paint the words ‘I have never forgotten’.
Wilcox has a knack for making history personal and small-scale, owing partly to the spare poetic texts that subtitle the films. Often combining first-person anecdotes with such genres as the travelogue, newsreel, children’s show, biopic, nature programme and experimental film (pioneers such as Stan Brakhage, Jack Smith and Jean Painleve come immediately to mind), Wilcox’s filmic universe is a shifting, layered affair in which all things great and small are deemed equally worthy of our attention. More significantly, there’s an underlying cosmology at the heart of his entire project that probes the ways in which all these isolated things, people and places (both past, present and future) are joined.
Which brings me back to Rimbaud and Marseille – the setting for Stephan Tennant’s single unfinished novel Lascar. Tennant, an English dandy whose sensibility echoes Wilcox’s own, was the subject of an early Wilcox piece, Stephen Tennant Homage (1998). The antithesis of Rimbaud, who seemed unable to sit still, Tennant once famously spent four years in bed. Embodying a decadent penchant for indolence and reverie, he would surely have loved such Wilcox gems as Around the World in 80 Seconds (2003), which tours the globe via vintage postcards from its most famous cities. Experience, that most overrated of pursuits, is shunned in favour of expectant imagination and aesthetics. A potent distillation, Wilcox’s art offers a compelling case for staying at home, where one’s pleasures are ample and assured.