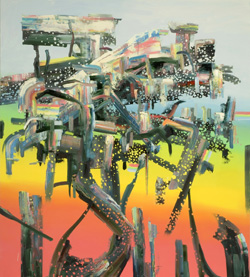 Blues legend has it that if guitarists find themselves at the crossroads, they can make a deal with the devil to play well. For a painter, since the roads to painting always lead towards either representation or abstraction, finding yourself at that junction probably means a Faustian pact involving the ability to paint both skillfully. No one of late has been as successful at this as Gerhard Richter, who continues to show just how far one can push painting. That’s not to say that the exercise has been exhausted. On the contrary, as Tomory Dodge demonstrated in his works at ACME, there is plenty of elbowroom left in both directions. Dodge may swing from pole to pole, but he is always faithful to one thing: paint. He clearly enjoys the stuff and doesn’t hesitate to trowel through it, bend it, smear it and even squirt it straight from the tube.

In S.G. (all works 2006), an easel-sized painting of a group of palm trees that at first glance look LA perfect, if a little fractured, we see Dodge at his mimetic best. A closer look, however, shows the trees to constitute the same quirky gestures from which the abstract works are built. All that you need is there: the hazy sun-shine backdrop, the trees seen at a certain urban distance – not a thicket like in the tropics, but lonely palmy neighbours embodying much of the Southern Californian landscape in their vacant, spread-out, stoic stances. Pushing away from this slice of reality and on into abstraction is Early Riser. The background is as lovely as any morning, with the pinks and lavenders of dawn’s early light, while Dodge builds up a pile of thick brush-strokes from greys to outright rainbows. His palette looks like tortured colour wheels and grey scales, all dragged around and smeared together. These marks float about, building into climaxes fixed against the atmosphere. Where Richter’s gestures show a total commitment of purpose, Dodge allows his to waver – not out of a lack of confidence but from something more like an abiding faith in meandering.

Survivor Type has the same erector set of marks built up over a vibrant, almost fluorescent, rainbow background; however, this time these gestures are riddled with what look like bullet holes. These cavities conjure up empty places, with lonely, rusty things riddled with traces of killing boredom and a few too many beers drunk. What they are doing in a Modernist painting is basically just blending in, like camouflage. EFT…, also has a curious look, as though a tin worm has bored a pathway throughout, or someone has sandblasted through Dodge’s brushstrokes. Up close, you see this was simply done with dozens of daubs of paint, all keyed to match the background. These works are not haunted – as Richter’s are – by photography but have the simple painterly concerns of good old-fashioned illusion.

This all comes together in On and Weightless, which, while a cursory glance suggests a bias to-wards the abstract, actually bends back towards ‘the real’. A vibrant blue sky is filled with tiny flecks of pigment, some of them even carefully pulled into tufts like cake décor. These marks can go either way: held in suspension for just a moment against a sky so blue, they become shards from a crash, shrapnel from some off-screen explosion caught just before gravity begins to bring them down and reality sets in. They could just as easily be a collection of carefully placed moments of oil on canvas, sometimes painted with an almost caring sensibility.

These works all try to help make sense of that perennially slow magic which is painting. Dodge is just trying things out, and, by taking the odd turn and seeing where it leads, many of these works find resolution – as well as charm. Without the use of systems or theories, these paintings make it up as they go along. Keith Richards once said that rock ‘n’ roll is in the mistakes, and making those mistakes work for you. I do not see what mistakes Dodge has made, but I am sure he is making them work. In showing us a simple faith in paint, and that alchemy that can create images that we understand but never fully capture, he keeps them interesting. So did either of these artists make a pact with the devil? It sure would explain Richter’s virtuosity, but as for Dodge, I say no deal. He has spent plenty of time at this crossroads, but only because he’s too busy cruising these dirt tracks of abstraction and representation. He knows it is in the journey that good things show themselves.