BY Terence Trouillot in Exhibition Reviews , US Reviews | 16 DEC 21

BY Terence Trouillot in Exhibition Reviews , US Reviews | 16 DEC 21

It's difficult for me to conceive of 2021 as separate from 2020. The last two years have merged seamlessly in my mind –  time folding onto itself as we continue to wrestle with the reality of COVID-19 while, at the time of writing this article, the Omicron variant spreads like wildfire across the globe. Despite all this, the last 12 months have been exciting and optimistic (though hectic) in offering a slew of long-overdue surveys and some impressive gallery exhibitions in the United States. This has been yet another trying year, but the visual arts feel more vibrant than ever, providing a hopeful prospect of what's to come. Here are the highlights of 2021.

The legendary 1990s collective, Art Club2000, celebrated its first major survey earlier this year at Artists Space. 'Active until 1999', wrote Simon Wu, 'the collective of seven precocious students from Cooper Union – Patterson Beckwith, Gillian Haratani, Daniel McDonald, Shannon Pultz, Sarah Rossiter, Soibian Spring and Craig Wadlin – made work that discussed and embodied New York’s (and the art world’s) most salient hypocrisies of the period: the commodification and gentrification of Manhattan’s downtown (from SoHo to Chelsea) and the neoliberalism of the city’s progressive cultural workers.'

Perhaps one of the most anticipated shows in New York during the pandemic – which opened in November 2020 – was Salman Toor's 'How Will I Know', the painter's very first museum solo exhibition showcasing his exquisite tableaux of Brown queer life. In his review, Tausif Noor wrote: 'I don’t remember precisely when I first saw Salman Toor’s paintings but I do distinctly remember how I felt in that moment: a particular flash of recognition, a momentary illumination that results from seeing and being seen.'

A brilliant show at Bel Ami this past spring showcased the sardonic oeuvre of Ben Sakoguchi, including his titular work, Chinatown (2014), a massive, multi-panel history painting detailing Los Angeles's murky past of anti-Asian racism. 'Sakoguchi spares no detail' wrote Travis Diehl, '[t]he central panel, long and horizontal, is divided into 18 compartments – one for each of the victims of the infamous 1871 Chinatown lynching, the worst mass murder of its kind in US history. The painting is grisly and unflinching: the victims are mauled, bruised and hanged by their necks from trees and pullies. Yet, each is also delicately adorned – and partly concealed – by red and gold latticework of the sort that suffuses Chinatown.'

Arguably one of the best exhibitions of the year, Lorraine O'Grady's 'Both/And' at the Brooklyn Museum of Art, marked the first major solo retrospective of the celebrated performance and conceptual artist. In an interview with Malik Gaines, O'Grady stated: 'You have to understand that my performance Mlle Bourgeoise Noire [1980–83] predated the work of the Guerrilla Girls by five years. At the time, it was a total non-sequitur to ask a question like: ‘How many Black people are in this gallery?’ The racism and cultural self-satisfaction were appalling. The only Black artists at that time who could even be considered artists by the structure in place were using white aesthetics. Somebody like Faith Ringgold was just laughed at.'

Kenneth Tam's noteworthy solo exhibition 'Silent Spikes' at the Queens Museum in New York, presented a single work by the artist exploring masculinity and its relationship to race and labour. 'His latest work, Silent Spikes (2021)', wrote Alex Jen, 'takes the masculine trope of the cowboy and the 1867 strike of Chinese Transcontinental Railroad workers as its starting point. In the video, Tam is disarmingly direct, asking a group of Asian men what they think sensuality is – something I never thought would be a matter of public concern.'

Kandis Williams took over the Institute of Contemporary Art, at Virginia Commonwealth University, with an expansive installation looking at the history of prison farms in Virginia. 'Elaborating her earlier experiments on a grand scale', wrote Ian Bourland, 'the work addresses a vast historical sweep without sacrificing a feeling of immediacy made all the more potent by its contrast with the screen-bound textures of most COVID-19-era interactions. The gallery – an airy, vaulted white cube – had been transformed: when visitors exit the elevator, they are greeted by a sense of lush overgrowth, more evocative of the region’s tidal marshes, kudzu and dense forests than the Richmond streetscapes beyond.'

This past summer, the Museum of Contemporary Art, North Miami, presented a well-deserved retrospective of Michael Richards, a celebrated multi-media artist who tragically lost his life during the terrorist attacks of 9/11. 'This pointed survey of Richards’s oeuvre', wrote Jackson Davidow, 'enables viewers to trace themes, materials, forms and motifs from work to work, starting with photographic and video documentation of his early installations, such as Same Old Song and Dance (1992), a jarring piece displayed in the windows of the Grey Art Gallery at New York University that scrutinizes lynching, blackface and minstrelsy.'

Woody De Othello's second solo outing with Jessica Silverman, 'Looking In', was an impressive display of new works – paintings, ceramic sculptures, and one large-scale bronze – all made during the COVID-19 shutdown. As Natasha Boas stated in her review: 'In this show, the artist’s recurring motifs of plants, flowers, mirrors, phones, light switches, clocks and body parts – depicted in ceramic sculptures, works on paper and paintings – deliver an experience akin to noticing the minutia of our daily lives while stuck at home during shelter-in-place orders for the better part of a year.'

This fall, the Swiss Institute opened 'Rosemary Mayer: Ways of Attaching', the first institutional survey of the late American artist. Anchoring the exhibition were Mayer's textiles sculptures and drawings from the early 1970s – rare works that are absolutely wondrous and beautiful to look at in person. 'Hypsipyle (1973), her last scaffolded fabric piece', wrote Paige K. Bradley, 'a ruddy orange, dark lilac and sand-hued fabric draping on bent wooden rods, hovers between form and formlessness, positing irresolution as a burning ambition.' 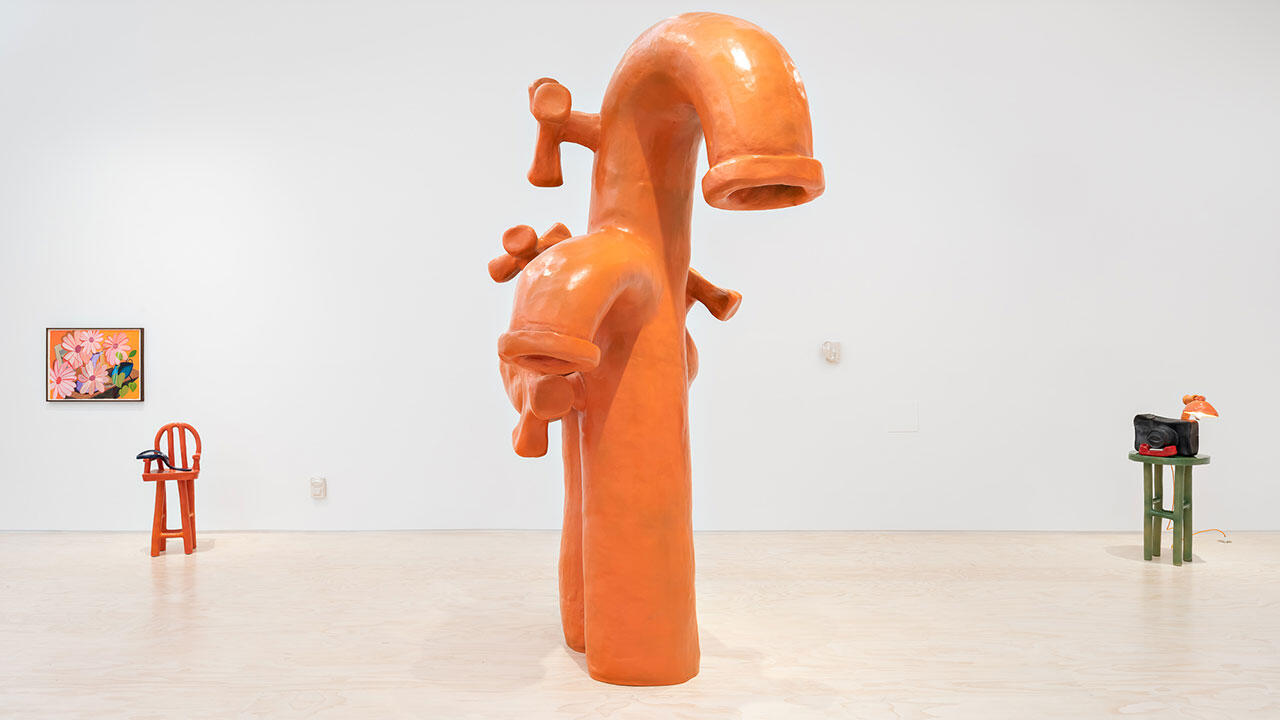 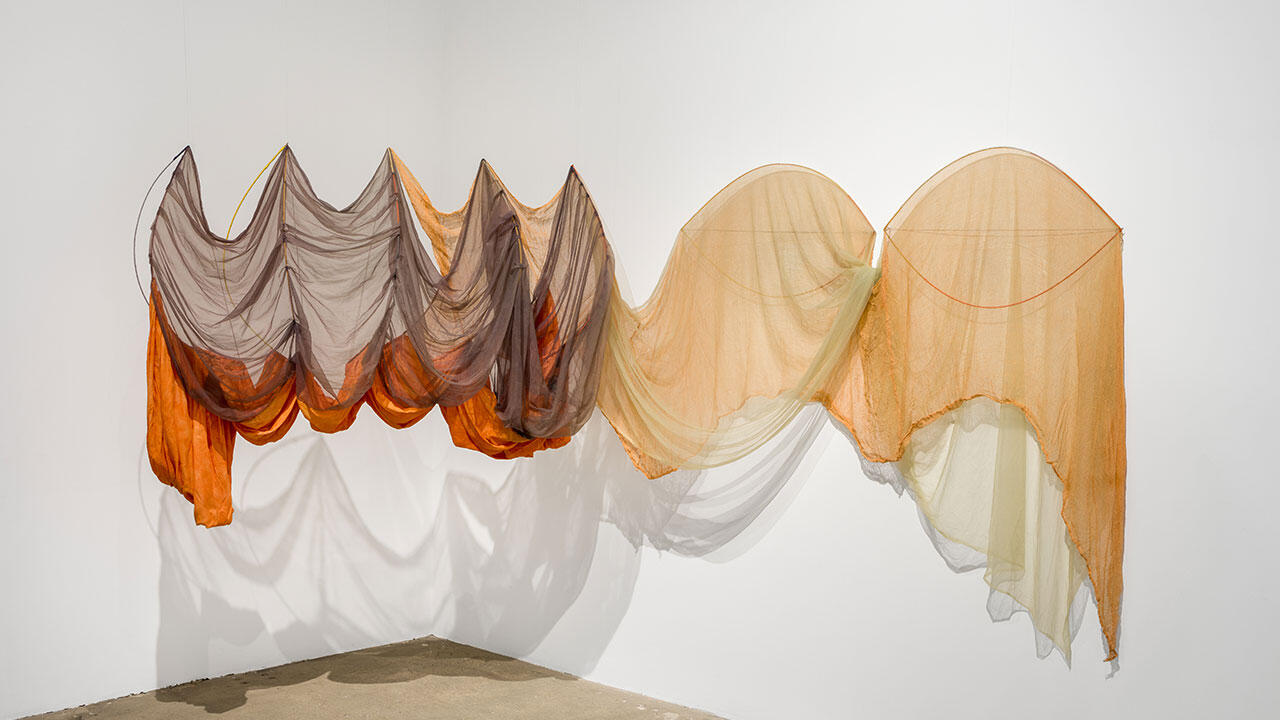 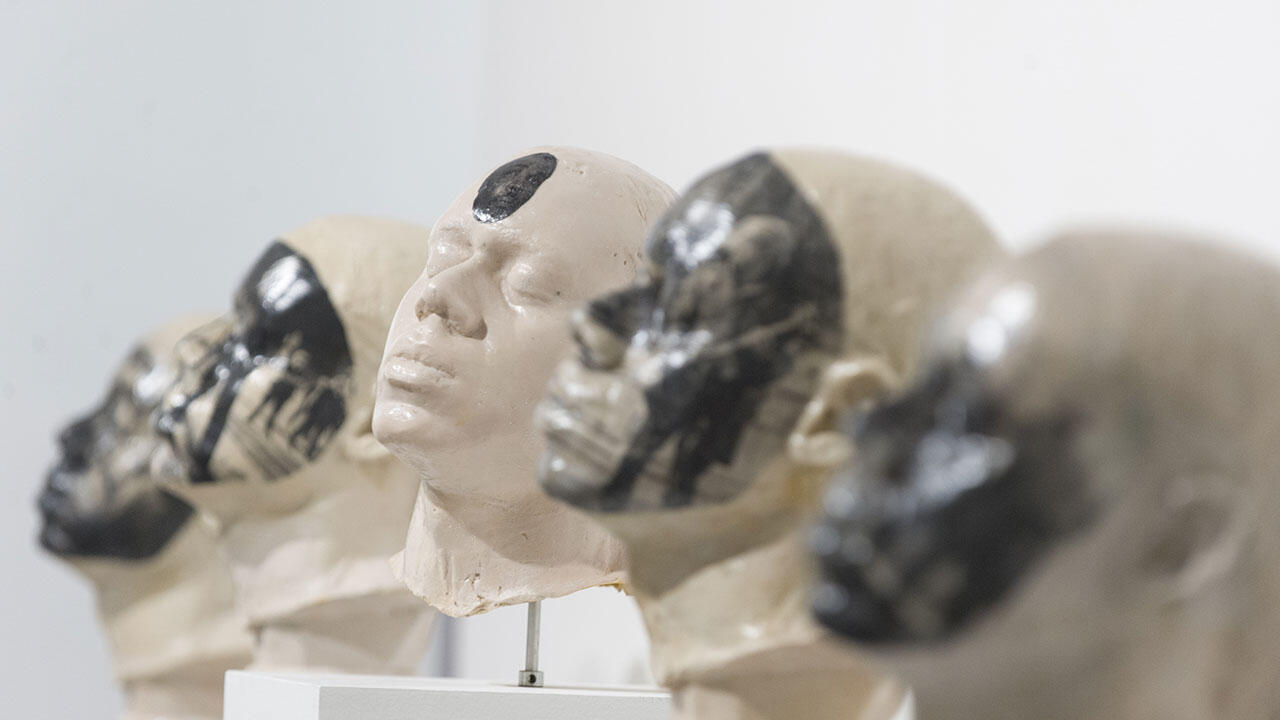 At the Museum of Contemporary Art, North Miami, the late artist, who died tragically during 9/11, is remembered for his trenchant works that reflect on the transcendence and vulnerability of the Black male body