The Trials of Art 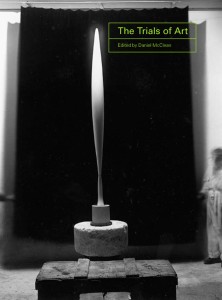 The title of this new collection of essays about the intersection of art and law evokes an image of struggle in which art is the protagonist and law is the instrument used to attack it. We are riveted when puritanical agents of the state go after provocative art works, or when judges condemn them as obscene or subversive. The risk is that while we are focused on the show in the courtroom, we will miss the real action – which takes the form of transactions. These days censorship is rare, but commerce is rampant. Law is, 99 percent of the time, a system for facilitating and regulating the exchange of property, and it is in this role that law most often hurts art, as well as helps it.

The Trials of Art doesn’t try to shift our focus away from the courtroom towards the contract. The narratives of the censorship attempts that were the central events of the 1990s’ ‘culture wars’ – targeting Robert Mapplethorpe’s photographs and Andres Serrano’s Piss Christ (1987) – are duly recited. And it’s worth remembering how very clumsy the law’s attempts to come to terms with challenging contemporary art can be. In 1927, as several essays in the book discuss, the American owner of one of Constantin Brancusi’s Bird in Space works (1923) found himself in court, defending his claim that the work was not subject to import tax because it was a sculpture. The tax authorities argued that the object couldn’t be a sculpture because it was not representational – it didn’t look like a bird. (They lost.)

But as these essays occasionally suggest, the most pressing questions about art and law may never surface in a trial. Law may have a poor grasp of aesthetics, but it is itself a grasping instrument. If art is valuable, the lawyer says, I’ll help you sell it. The difficulty lies in capturing its value. The forms that contemporary art takes are ever more varied, and art is restlessly critical of any firm definitions of itself. Consider some standard language currently appended to certain contracts of sale by one contemporary gallery: ‘Note: This work is made using materials that degrade with time. [...] All manner of breakage, rot, imperfections, etc. are intentional and integral parts of the work and are intended by the artist. Accordingly, such changes may or may not be conserved, per the Buyer’s preference, at the Buyer’s expense.’ Law is the language of fixity, of objects and ownership, but much art defies these concepts.

Can art get what it wants from law? One essay in the book, by Judith Bresler, criticizes the shortcomings of the law protecting artists’ ‘moral rights’ (that is, artists’ ability to control the display of their work after they have sold it). The law, she suggests, should prevent the reproduction of a work in an altered or defaced form. This would give artists more control over their work, but it might also fatally inhibit artistic acts of appropriation. As editor Daniel McClean warns in his postscript to the volume, the more that artists and art institutions rely on law to spell out their working relationships and to claim control over art works, the less flexible the processes of artistic collaboration, and even production, become.